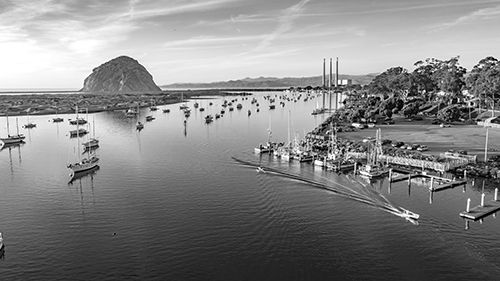 It started as a way to celebrate Morro Bay’s signature crop — the alligator pear — and quickly morphed into something much bigger, and one of the town’s signature special events.

And now after a 2-year hiatus due to the coronavirus pandemic response, the Annual Avocado-Margarita festival is returning to the waterfront. But just as the world has changed after the pandemic, this 2022 version is much changed in duration, location and even in name, too.

Now dubbed the “Avocado-Margarita Food & Drink Festival” the event this year is a three-day affair, Friday-Sunday, Sept. 9-11, with the main festival at Tideland’s Park, and for the first time ever, a big concert at Morro Rock featuring one of the area’s biggest up-and-coming bands.

Erica Crawford, the CEO of the Morro Bay Chamber of Commerce, which has produced the festival since 2006, said the festival’s success was in part responsible for this reimagined event.

That mass of people was packed into the relatively small parking lot at 714 Embarcadero, and the closed off street from Marina to Harbor.

The space issues were compounded by site restrictions like fencing around alcohol areas ordered by the State ABC and fencing to delineate the festival grounds that irked business owners on Embarcadero; plus the City is actively trying to sell that parking lot for redevelopment which means it won’t always be available, and really made the old site unworkable anymore.

They’ve been working with Hannah Liquenaitova of Project XO, a date night planning service, who has planned their annual gala dinners. “At the first of the year,” Crawford said, “we started looking at budgets and talking with Hannah.”

The key question was where could they put the festival that’s big enough to handle a big crowd and still benefit businesses? Another event company, Just Us Events, which they’d used at past festivals, Crawford said, was a pandemic casualty and could not do it anymore.

Tidelands Park, which used to host a huge 4th of July Music and Fireworks Show, was the logical location. That would allow the festival to be in a controlled area, and have people be able to wander the Embarcadero and access businesses at will.

What they came up with is in part philosophical — “Morro Bay is the resort,” Crawford said, “and the Chamber is the cruise director.”

With Tidelands the primary venue, Crawford said they decided to go big and for the first time ever, will hold a big 1-day concert event at Morro Rock.

Getting permission for that was difficult as State Parks, which owns Morro Rock, wasn’t interested but the City, which controls the big dirt parking lot, was amenable.

So on Saturday the 10th, “We’re going to build a big stage at the base of the rock,” Crawford said. The Rock concert will feature Proximo Parada, a local band, which Crawford said is on the verge of making it big. They now tour all over the U.S. and only play a few local gigs a year. They also played the Avocado Festival in 2017.

Crawford said in 2017, “They brought the sun out,” referring to that show which dawned foggy and cold, but cleared when Proximo Parada took the stage. “They have a really positive vibe.”

EJ Worland, who toured with Donovan Frankenreiter, is opening the show on Saturday.

That show starts at 6:30 p.m. There will also be food trucks and beverages at the Rock. (It would be advisable to dress in layers, as the Rock’s weather can change quickly.)

At Tidelands Park, the festival starts on Friday afternoon with family friendly events and Devin Welsh performing (lineup subject to change). And there will be a full complement of food and beverages at the park.

Friday will also have an outdoor, family movie night. If readers want to go to Friday’s event, Crawford said they will have to buy a 3-day pass. (Tickets available on 805TIX or on the Chamber’s event site, see: avomargfest.com)

Saturday at Tidelands is stacked with live music, with 30-40, mostly food and beverage vendors, though there will be some merchandise vendors and avocado growers, too.

The effort this year has also been focused on the food part of the festival’s namesake. Crawford said they will have local chefs compete for best avocado-infused dishes, not just have regular food with avocados thrown on, as the festival was criticized for having in the past.

Among the bands scheduled to play Saturday are Kenny Taylor, Cocktail Shorty, Silk Ocean, Hilary Watson and Band, the Charities, Carbon City Lights, and Dante Marsh and the Vibe Setters (again, the schedule could change).

On Sunday, the bands scheduled are Jessica Neie, the Damon Castillo Band, and Moonshiner Collective. (For up to date schedule, see: AvoMargFest.com).

The festival will be a paid affair too, with individual tickets sold for each day and for each venue, or 3-day passes. “Everything’s for pay,” Crawford said. “The entry, food beverages; admission gets you free music.”

Tidelands Park will be closed to the public, but if someone wanted to go fishing or launch a boat, the launch ramp will be open. Liveaboards who normally use the parking lot will need to get a parking permit. There will be no festival parking at Tidelands and a City trolley will be shuttling people up and down the Embarcadero from Morro Rock to Tidelands for $1.

The concert at Morro Rock will only take up a small portion of that lot, she said.

And local businesses that rent things like golf carts could potentially set up a shuttle service too, she said.

And they are working with a local limo service about shuttling people around should the Rock parking fill up. Each venue will have its own admission charge.

While they may have a great capacity limit with the two venues, Crawford advised everyone to go online and get advanced tickets.

And for VIPs, the harbor cruise boat, Chablis, will dock at the Tidelands side tie dock and serve as a “VIP Lounge,” she said.

They are still seeking event sponsors, and they’ve already gotten the big local companies on board — nhc, Vistra, Visit Morro Bay, Visit SLO — but they welcome additional business sponsors and have various levels of sponsorship.

And with two Saturday venues sitting over a mile apart, they will need lots of volunteers from the community. “You can sign up on the website,” Crawford said. “For a 6-hour shift you’ll get a 3-day pass and a T-shirt.” The Lions and Rotary Clubs are also volunteer sponsors and Crawford said people could volunteer through them, too.

Bringing back the festival is part of the Chamber’s purpose in its partnership with the City — economic development.

“We’re getting those cash registers ringing,” Crawford said, “bringing people to town and supporting the businesses. And with economic development, we’re figuring out how to do events again.”