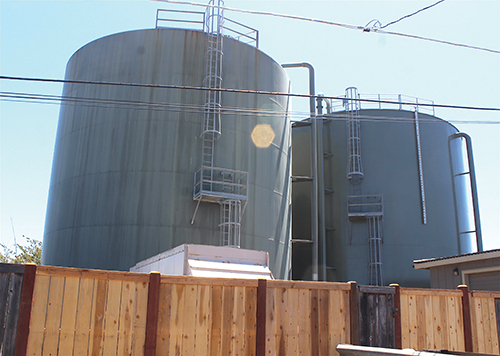 Residents in Los Osos have a bad taste in their mouths, possibly due to work recently done rehabbing a water storage tank.

“Yes, we are aware of the taste and odor complaints,” Munds told Estero Bay News, “and we are making operational changes to mitigate the problem.”

He explained that the 500,000-gallon storage tank was recoated inside and out “and all rust and other climatic damage to the exterior were repaired.”

The tank is one of two at the site, and the CSD also plans to recoat the second of the twins, as well. “We will be doing similar work to the north tank this fiscal year,” Munds said. “These tanks are key to not only water storage but fire protection.”

Despite the odd taste to the water, Munds said it’s OK to drink.

“The State Water Board Division of Drinking Water gave us the OK to start using the water in the tank,” he said, “after reviewing the lab analysis of the water. “The taste and odor issues, though very annoying are not a public health concern and tested weekly. The water is safe to drink according the ridged drinking water standards.”

He said they care a great deal about the essential product they provide — drinking water. “We take our responsibility to provide clean and safe drinking water to the community very seriously.”