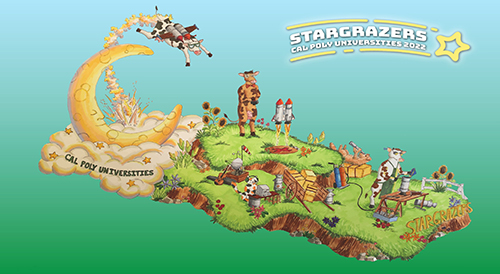 Hey, diddle, diddle, the Cal Poly universities’ 2022 Tournament of Roses Parade float features a cat and a fiddle — but the cow jumping over the moon will be wearing a jet pack.

When the parade returns on New Year’s Day after a one-year pandemic-related hiatus, the only student-built parade float will once again roll down Pasadena’s Colorado Boulevard. Called Stargrazers, the float brings to life a scene from the classic Mother Goose nursery rhyme “Hey Diddle, Diddle,” except with an engineering twist that only two polytechnic schools with a seven-decade connection to the Rose Parade could create.
The float aims to exemplify the 2022 theme of “Dream. Believe. Achieve.” The theme of the 133rd Rose Parade celebrates education’s ability to open doors, open minds and change lives.

Stargrazers mixes the whimsy of the nursery rhyme with the hardworking atmosphere of a college campus. As the float travels the 5.5-mile-long parade route, the audience will see a cow jumping over a 15-foot moon, held aloft by a jet pack made of metal milk cans and other farm materials. In the Cal Poly take on the six-line rhyme, three cows, along with their colleagues — the cat, a little dog, the dish and the spoon — are seen working to achieve the celebrated moo-n jump.

According to the teams of 20 students from each university, the cows also represent the float-building process. All year, while the bovine team has perfected its jet-pack technology, Cal Poly Rose Float students have been building the very frame to hoist the 600-pound cow into the air. The float also depicts numerous other stages of building: A brown cow tests one of the jet packs, while another wearing glasses and an apron is building a jet pack.
“Our team has been working on and refining this design for two years now, and I think all that hard work has really paid off,” said Regina Chapuis, president of the Cal Poly team in San Luis Obispo. “Much like how these cows are prototyping different jet packs for their big jump, we have been prototyping different iterations of this float before settling on this final design.”

The project is a labor of love, added Christopher Nares, president of the Cal Poly Pomona team.
“This float embodies our Rose Float family,” Nares said. “We work hard and may fall, but we always get back up and reach for the stars. The float building process is filled with so many unexpected challenges that it gives college students like us opportunities to hone our problem-solving and leadership abilities far beyond what many classrooms offer.

“As college students, we are just taking our first steps in our various careers and industries. It is the power of education, the power to try and fail and then to try again, that will allow us to achieve whatever our personal ‘over the moon’ is.”

The building process itself exemplifies the 2022 parade theme. The students choose their concept in early spring, in this case, early spring of 2020. That was followed by working diagrams and plans, estimates and measurements. The ideas and imagery are refined, and then students discuss feet and inches, pounds of steel and numbers of floral blooms.

The Stargrazers float will feature larger-than-life nursery rhyme characters, with lots of animations, and the entire float will be decked out “head to hoof” in natural material.

The decorations team brainstormed materials to use for the past two years. The design and construction teams worked hard to make sure that all the cows and their colleagues look lifelike and beautiful and are structurally sound.

“All three teams have been working together across two campuses to put everything into motion so that by the time the float goes down the parade route, the average viewer will have no idea it took hundreds of volunteer hours, tons of steel, and thousands and thousands of flowers,” McManus said.
Next year will be Cal Poly universities’ 73rd entry to the Pasadena classic, held annually on New Year’s Day. The 2020 parade was seen by 700,000 people in person and more than 70 million worldwide on television. The 2021 parade was canceled because of the COVID-19 pandemic.
For more on the Cal Poly Rose Float, visit www.facebook.com/rosefloat.