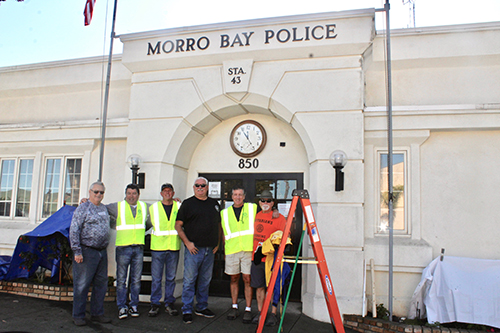 Story and Photos By Theresa-Marie Wilson

The exterior of the Morro Bay Police Department is starting the year with a clean record thanks to efforts by a local service club.

Members of the Rotary Club of Morro Bay (RCMB) recently spent a few hours pressure washing the 50-year-old building as one of their 2022 service projects.

The idea came out of a project poll among RCMB members who wanted to boost morale for officers and staff.

“We wanted do something for the police department to let them know that they are appreciated by the community and that we’re all thinking of them and wishing them well,” said RCMB President Tim Olivas. “I think law enforcement had a rough go the last couple years. So we wanted to make sure they knew that their community supported and we’re appreciative of them.”

After members of the departments suggested cleaning the exterior, Olivas and club members Jeff Jones and Greg Hardcastle brought the equipment to the site where Chief Jody Cox and others joined the effort.

“The police department has been in action here for 50-plus years,” Cox said. “As you can tell, over the years it’s been weathered. It says a lot to have the building refreshed and cleaned.  Hopefully after we get all this power wash done, we’re going to put a fresh coat of paint on it and really make it presentable. We are probably going to be in it for another few years to come with finances the way they are. It’s just really important that it looks presentable and is something that that the community can be proud of. It speaks to represent the community well.”

The police department project is multi-layered. The Rotary Club will install a bench in front of the station and will purchase the paint for a mural that is in the planning stages for the rear of the building.

In addition to the pressure washing, Rotarian Lori French spearheaded a cookie delivery to the police station and other public service agencies including the harbor patrol and the fire department.

“It’s just another morale boost,” Olivas said, “to let them know, the community appreciates them.”

RCMB’s next project involves a graffiti removal program that would unite other area Rotary clubs in a joint effort. The goal is to have club members available to help remove tagging and the likes using the San Luis Obispo Sheriff’s mobile paint station.

The Morro Bay Police Department is located at 850 Morro Bay Blvd. For more information about the Rotary Club of Morro Bay, go to https://morrobayrotary.org.