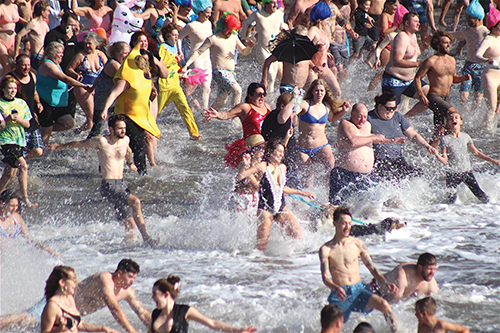 Several thousand people turned out New Year’s Day for the 43rd Annual Cayucos Polar Bear Dip braving 54-degree water (with the air temperature at a chilly 52 degrees) and fairly rough surf to ring in 2023 with a chilly splash.

As always the action on the beach before the noon dip began was wildly fun, with groups of dippers coming in costumes that included a bunch of Troll Dolls, Vikings and Valkyries, a group of Minions, dandy pirates, and in case you wondered where Waldo was, he (and she) were in Cayucos clad in red-and-white striped shirts and nerd glasses.

The oldest dipper this year was 81, as determined by the costume contest emcee, Phil Howard, who with partner Kevin Crawford of CNH Productions, has led the beach party for some 25 years.

The youngest dipper was just 8-months old (and dressed as a pirate), and the person who came the farthest for the event was from Germany. Other distant locales represented included Fiji, Poland, South Africa, Prague and Spain.

By noon there was an estimated 6,000 people crowded onto the beach north of the Cayucos Pier, but when the celebrants dashed into the waves, over half of them stayed on land.

Those that braved the surf were rewarded with “Certificates of Stamina” suitable for framing and issued by the Chamber of Commerce, which also sponsors the event, which is dedicated to Carlin Soulé, who started this traditional bit of madness over four decades ago.

As is normal, the local Cal Fire crew was supported with rescue swimmers, lifeguards, the Coast Guard and Morro Bay Harbor Patrol, with no doubt a few Sheriff’s deputies mixed in with the crowd to keep the celebration a happy one.