Thrift Store Goes to the Dogs — and Cats 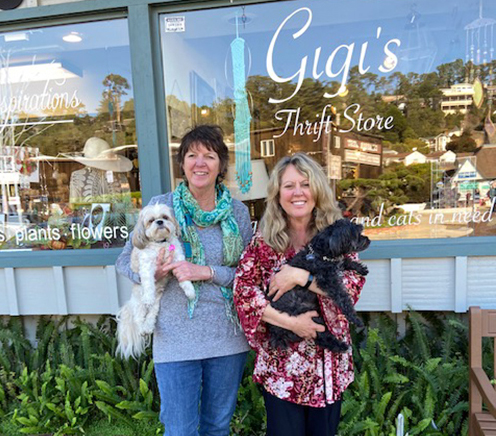 The minute you walk into Gigi’s Thrift Store you’ll see that it’s not like any other you have visited. Owners Liz Bannon and Holly Nero think of it more as a thrift “boutique.” Located in the West Village of Cambria, the store is light and bright with room to browse the artfully displayed items. And what’s more, it’s shopping with a purpose. Holly is quick to explain, “This is a for-profit store that gives back to non-profits.”

Holly and Liz met back in 2005 while both working with an organization that rescued dogs left stranded by Hurricane Katrina. Both being passionate about animal rescues, they became good friends. Earlier this year, Liz had the idea of a thrift store in order to support non-profits that support animal welfare. Holly jumped aboard.

“It happened really fast,” says Holly. “Everything fell into place, and we opened last May, right in the middle of the pandemic. We weren’t sure that was the best idea, but it’s been very well received. We’ve had a great response.”

Holly describes the partnership as extremely compatible. “I handle the books and finances,” she said, “and Liz has a great eye for what sells and a real talent for display. We both handle the day-to-day operations.”

The name of the shop, Gigi’s Thrift, was chosen in honor of a scruffy dog that was rescued after her 99-year-old owner passed away. No one stepped up to adopt her, so Liz started a GoFundMe for the dog’s health needs. That awareness got the dog adopted and raised so much money that there is still a credit at the vet for Gigi and other dogs in need. “Plus,” adds Holly, “Gigi is such a classy name.”

Gigi’s Thrift occupies the space where the Soldier Gallery once stood. They are open seven days a week from 11 a.m. to 5 p.m. The store has collectibles, small furnishings, vintage clothing and accessories. A large portion of the shop is dedicated to books — lots of books.
“We were surprised so many people still like to read a real book, both paperback and hardcovers,” Holly said. “We sell a lot of books and bring in more all the time.”

One hundred percent of all book sales go directly to a non-profit. There is also a selection of handmade dog toys with proceeds going directly to the non-profit of the month.

Gigi’s Thrift rotates the non-profits it supports. They have donated to HART, Meade Rescue in Creston, and Short & Sweet in Templeton. Both Meade and Short & Sweet focus on rescuing senior dogs. Future non-profits are Pacific Coast Wildlife and the Marine Mammal rescue in Sausalito.
Stop by Gigi’s Thrift Store at 816 Main in the West Village of Cambria, and feel good knowing your discovered treasure is helping a rescued dog or cat, or perhaps a seal or other marine wildlife. Donations are accepted anytime, but Gigi’s ask that you call first at (805) 203-5769.