A Cup, a Bite and Nostalgia at Nautical Bean 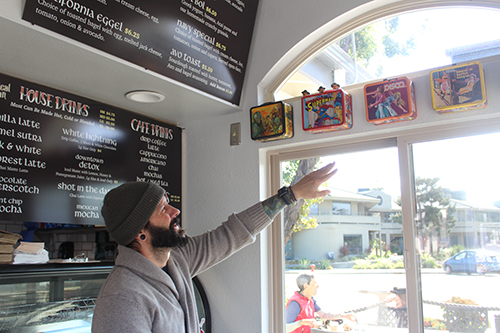 Brett Jones is a businessman and pop culture fan. Here he shows off some of the collectible lunch boxes decorating the interior of the Nautical Bean in Baywood.

Looking for a new place to get your morning jolt, enjoy a bite or hang out with friends? The highly anticipated Nautical Bean Coffee House and Bistro in Baywood is officially open.

The coffee shop opened April 4, post deadline, at 1399 2nd Street inches from the pier overlooking the estuary. This is the third location the family owned business operates. Owners, husband and wife, Bob and Dee Jones, and their son Brett also have shops at 11560 Los Osos Valley Road and 2010 Parker Street, both in San Luis Obispo.

Most independent coffee shops have their own vibe that can be almost as important to customers as the coffee itself.

“I’d say we are non-pretentious, very casual,” Brett said. “Sometimes people get intimidated when they come into a coffee shop; ‘How do I order? What do I do.’ I don’t want anyone to feel like that. I want to be laid back. We’re kind of three generations here, because we have my mom and dad and myself. All of my daughters have worked at one. It’s more of a community feel, a local’s feel.”

Brett, who learned the coffee business working at the shop on LOVR before he and his family bought it 20 years ago, says Nautical Bean is considered part of the second wave of coffee. Meaning, in the evolution of consumer culture that first brewed in the 1990s, a demand for higher quality and better tasting beans and flavored coffee drinks — a break from the same old grind in cans at grocery stores.

The shop serves six drip varieties and has a list of house drinks, most of which can be made hot, cold or blended. Everything from an Americano, hot water added to a shot of espresso, to a Rainforest Latte, a soy chai matte latte, are on the menu board. Hot and iced teas as well as blended juices are also available.

The décor inside the shop is a quick trip back in time to plastic school lunch boxes, framed music and art posters and a few nods to music legends David Bowie and Johnny Cash. Of course, it wouldn’t be a Nautical Bean without skateboard decks hanging on the walls.

“I’m into mostly all things pop culture,” said Brett “I was born in the seventies, so I am really big into the 80’s stuff.”

Don’t think you are going to go hungry while sipping your favorite beverage; the Nautical Bean serves breakfast all day featuring burritos, bagels, sandwiches, and bowls.

“It is all made to order,” Brett said. “Nothing is just warmed up, it’s all fresh.”

Unique to the Baywood menu item is the Navy Special, an open-faced, toasted bagel with cream cheese, lox, tomato, onions and capers. The sandwich is named after the Baywood Navy, a group of regulars who frequented the location when it was the Back Bay Café.

Although the interior of the shop is small, plenty of tables will be available outside and heaters are part of the plan for colder days. The shop is also serving guests of the neighboring Back Bay Inn and the Baywood Inn.

As of opening day, there are eight employees running the show including Brett, a general manager coming from the Parker Street location, and six new local employees. There is a possibility that two more positions will open. The coffee shop is open from 6 a.m. to 2 p.m. Mon. – Fri. and 7 a.m. to 2 p.m. on the weekends. Brett says he hope to extend the hours.

“Ideally, I would like to be open a little later; there is a lot going on here.”

Another big thing on Brett’s agenda is his wedding to his fiancé, Megan, in May. The couple will blend their families and share five kids.

“We’ve been together for two years now, but we’ve known each other for a long time,” said Brett. “We both like to say our timing, when we got together, was serendipitous.”

Come June, maybe Brett can take time to sit back and enjoy his own cup of coffee with new friends in his home away from home on the North Coast.

“I’m a firm believer that if your pour into your community, it will come back ten-fold. I think one of my first posts [on social media] about what we were doing here got over 150 comments, and it was all positive. That was really encouraging to see.”