Are We Scared Enough? 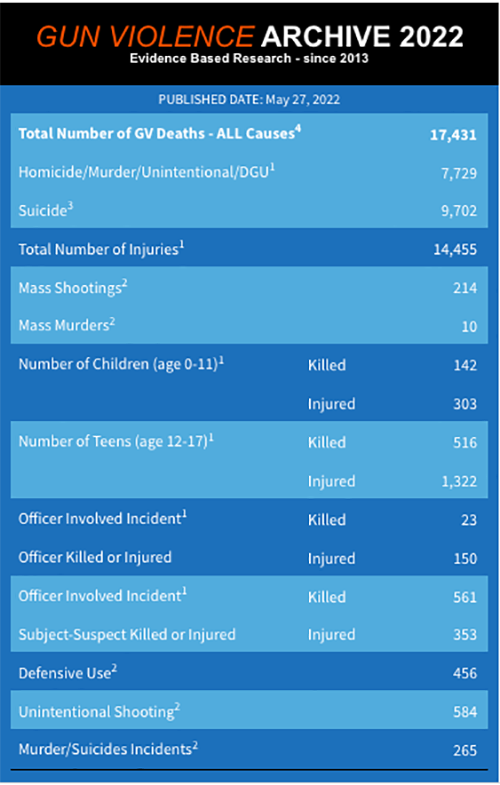 The number of deaths in the United States from mass shootings as of May 25 was 214, according to the Gun Violence Archive. A staggering 658 children under 17 were killed, 1625 were physically injured and the lasting emotional impacts are not quantifiable. Those statistics were collected from more than 7,500 law enforcement, media, government, and commercial sources. Gun Violence Archive defines a mass shooting as an incident in which four or more people are shot or killed, excluding the shooter.

Last month, over a period of nine days, 31 people were killed in two mass shootings in the United States. Acting alone, gunmen murdered 19 children and two teachers at Robb Elementary School in Uvalde, Texas; and 10 people were murdered in a racist attack at a Black neighborhood grocery store in Buffalo, New York.

“The normalcy of violence everywhere is concerning,” said Shawn Ison, family services program manager for Transitions-Mental Health Association. “So much of it, unfortunately, is making kids not fearful enough. I hate to say that.”

Although she said she has many theories as to why that is, one factor that should be considered is the prevalence of violent behavior we are exposed to.

“I think all of our video games, the movies, and everything we’re watching just kind of glorify violence. Violence is just not scary like it used to be.”

The tragedy in Texas marks the 27th shooting at a K-12 school in 2022, according to the publication Education Week. It is the deadliest elementary school shooting since the one at Sandy Hook in December 2012, when a gunman killed 26 people, including 20 children.

These tragic events require that adults have difficult conversations with children to help them cope.

“Children really take their parents lead as to how to react to things,” Ison said. “It’s important that parents really try to be calm and concise with things; be as honest as appropriate with the age and listen to and give validity to their feelings. Keep the stories as simple as possible, especially for the younger kids. Try to give some focus to the heroes of the story.”

That honesty and attention to an individual child’s reaction and processing abilities should extend past recent tragedies and cover safety plans and precautions as well.

Following a school shooting, your child might express fear of returning to classes.

“We have to acknowledge that it’s a scary world,” Ison said. “This can happen at the grocery store, the bank or whatnot, so we really need to have those continued discussions. I encourage parents to get a hold of [active shooter] school plans and drills, read through those and work through them with the kids so they are prepared.”

Older kids have more access to the news, social media and peer conversations that can include miss-information. Discussing their feelings with a focus on listening rather than talking will help a parent or guardian better understand how the child is coping.

“Especially with teens, they want to be proactive when they hear this stuff and want to elicit some kind of change,” Ison said. “It’s so very important to really hear what their fears are and see what you can do to provide some kind of comfort.”

On top of the trauma that comes from mass shooting, even if not directly involved, kids are coming out of two years of the coronavirus pandemic and the isolation that came with school and group activity shutdowns.

“I think the climate of our country is really concerning right now,” Ison said. “I think depression and anxiety was just further compounded with COVID and being isolated. That sometimes will lead to more severe mental health issues that haven’t been addressed because they weren’t being seen in a social setting.”

With that in mind, Ison said that parents should always be aware of behavioral changes with an emphasis on anger, or signs of depression, anxiety and substance abuse.

“Our biggest sign is when our kids have really gone inward and are not interacting with peers or with family,” she said.

It should be noted that children are not the only people impacted by the mass shootings across our country. Ison recommends that adults also seek social support whether that means a therapist, other family members, a peer or church or online groups.

“I think we all need to just be honest and talk through our concerns, and listen to other people’s thoughts on how they develop a safety plan with their family, for all things,” Ison said.

Readers, who feel like they need someone to talk to or have questions about resources, should call the free and confidential Transitions-Mental Health Association any time of the day at 1-800-783-0607. For more information, go to www.t-mha.org.

Editor’s Note: As of May 31, eight more people were killed and another 45 injured in the five days since the Robb Elementary School shooting.