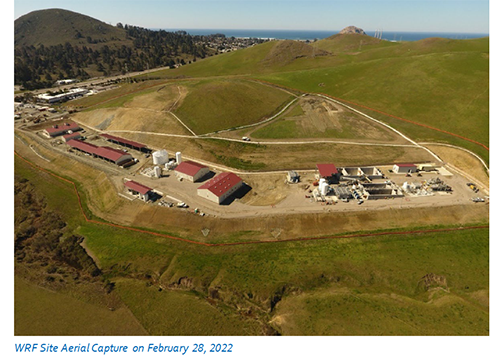 Morro Bay’s Water Reclamation Facility project has taken another flush down the proverbial cost overrun toilet, as new estimates on the total costs at completion have jumped about $16 million.

The City’s WRF Project Team in May unveiled its Third Quarter 2022 status report informing the Public Works Advisory Board and later the City Council of its progress and updating cost estimates.

As of March 31, 2022 the City has spent to date $136.87 million on both the new treatment plant and the pipeline conveyance project.

When ratepayers approved rate hikes in July 2018 to pay for the project, it was sold to the public at $126M. In recent months, after several rounds of contract amendments caused by everything from landslides, to Notices of Violations, to getting a massive boring tool stuck under the roundabout, to having Gas Co., representatives be late or being no-shows at trenching job sites, the overall costs had been revised up to $144M.

These new figures take the project into another level of concern, and prompted one Councilman into writing a letter to the Estero Bay News criticizing the project’s leadership.

“It’s been said,” reads a letter from Councilman Jeff Heller, who has been an outspoken critic of the project, “’when things go wrong there is plenty of blame to go around.’ That is certainly true in this case.”

Heller continued, “We struggle continually with housing affordability. The newly announced $160M is not good news. Many residents have lost confidence in their elected officials as a result.”

He calls on his 30-years experience managing large infrastructure projects in California. “Large capital projects include many stakeholders,” Heller wrote, “from citizens, elected officials, staff, attorneys, contractors, regulatory agencies and many more. Most often the critical mistakes in capital projects are made by ‘the owner.’

“The owner is this case are the residents of Morro Bay and the officials they elected to office [I am one] to represent their interests. As a group — the elected officials are accountable for the $34M in cost overruns.”

Heller lists a couple of things he believes the City must do to rein in the spending on what is by far the largest most expensive infrastructure project the City has ever attempted.

“The Mayor and council need to acknowledge the project is not going as planned,” he said. “That is an important first step if public trust is to be restored.

“Secondly, the mayor and council need to meet in closed session with our City Attorney and staff and review our contractual and staffing options. Until that step is taken, your elected officials may just keep hoping that the $160M current budget will grow no further.”

Heller, in another email sent to project critics in the community and shared with EBN, said that this is the first time the project team has produced an “estimate at completion” or EAC, something he has been asking them to do for 3 years.

“Now,” he said, “we have to pressure council to meet in closed session to review the contracts of all participants and discuss what can be done to complete the program sooner and under the $160M.

“So far I have failed to get any support from the council to even discuss this as a future agenda item. They refuse to discuss it.”

In questions posed by Don and Kristen Headland, who have been among a number of citizens watchdogging the project, and included in the PWAB agenda packet, they ask Public Works Director, Greg Kwolek to clarify what the EAC figure represents?

“This dollar amount,” he responded, “represents a rounded up estimate of the EAC for the entire WRF Program [the facility, the conveyance project, and recycled water]. The EAC includes all current contracts under the program, as well as new project contingencies, potential delay claims, increased costs due to regulatory compliance, increased costs for project management, and increased City costs.”

The Headlands asked where this extra money was supposed to come from? “The Sewer and Water Funds, at least initially,” Kwolek said. “The City also has submitted grant applications, which could offset some of these costs if we are awarded. We have other financing options as well.”

Indeed, in July 2018, when the City asked ratepayers in a Prop. 218 protest vote, to approve new rates to pay for the project, the $126M estimated budget included over $20M in “cash” that would come out of the new rates for water and sewer.

That was before the City secured some $67M in low interest federal loans at a 0.83% interest rate; and up to $100M State loan with an interest rate of about 1%. It also had already borrowed $10M from the State Water Resources Control Board for planning and design work, plus a $5M grant from the SWRCB.

Recently, the City applied for some $34M from a new grant program, and should they get it, or even a part of it, that would go a long way towards covering any future cost overruns.

Despite jumping over $34M in total estimated costs, the City has not had to ask for a new rate hike, but that could change.

The Headlands said, “As a Water and Sewer ratepayer, we are concerned about an increase in our monthly bill.”

To which Kwolek replied, “I completely understand that. As I mentioned, we have no plans to increase rates at this time. I will be more interested in looking at and evaluating the model of rate increases longer term as it relates to cost increases, inflation, and escalating costs of construction.”

On a related topic, Heller’s note to project critics briefly discusses the future issue of what will be done about the old treatment plant on Atascadero Road, which is 40% co-owned by the Cayucos Sanitary District.

“Re: decommissioning,” Heller wrote, “and demolition of old plant. [This was] Never in the $126M budget. I am on the subcommittee negotiating the divorce between MB and Cayucos.

“We have discussed many issues and who is going to pay for what? We are probably 6 months from announcing anything.”

• Installation of WRF treatment process equipment was completed, and the design-builder Filanc Black & Veatch (FBV) began testing equipment individually and as a system;

• The overall WRF process control system was installed and training of City operations staff on individual pieces of process equipment and the entire process was initiated;

• WRF site work progressed significantly and the site was prepared for paving;

• Construction of the Conveyance pump stations continued to progress, with significant focus on schedule recovery at the pump station on Atascadero Road; and,

The pipeline portion of the WRF will soon begin the trenching down Atascadero Road, connecting the pipes with a new lift station and bringing the work into a known Native American cultural site.

The project has archaeological plans with Native Americans monitoring the digging looking for artifacts. What they find will to some extent determine how long it takes and what mitigation measures might be required, which in turn could affect the costs as well.

So when will all the construction activity that’s disrupted the community going on 2 years now, end? Kwolek said, “The new WRF plant is expected to be brought online in late fall of this calendar year. Recycled Water is expected to be completed by Spring 2025.”

← Previous: Are We Scared Enough? Fund to Help Bean Family →