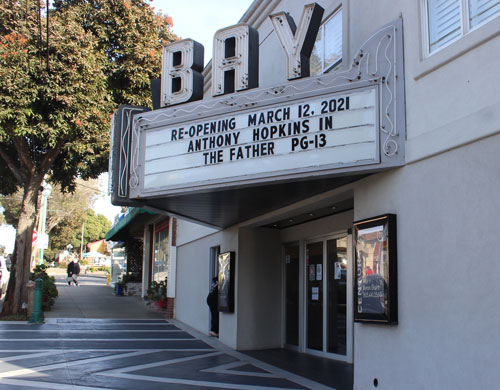 The Bay Theater is set to reopen March 12. Photo by Neil Farrell.

Local moviegoers are breathing a sigh of relief after the marquee on The Bay Theater was changed, signaling a planned re-opening after nearly a full year.

The last storefront movie theater (sans parking lot) in SLO County, and the only movie theater on the North Coast was put up for sale in January by Mary Lou Jannopoulos, who’s owned the theater for some 25 years.

This after the coronavirus pandemic response shut down all theaters in California in an attempt to stop the spread of the virus.

Built in 1942 by the Army Corps of Engineers for soldiers at the Morro Bay Naval Training Base (located on the power plant property). Those Marines were training for World War II’s Pacific Theater. Mrs. Jannopoulos’ late husband Jim bought the Bay back in 1973 from Ruth and Ted Morris.

She said the pandemic’s shutdown meant she had to dig deep into her own savings to keep the theater going, as bills — for everything from utilities, to City business and County Health Department license fees — didn’t stop with the forced closure of the theater.

And the movie business has changed because of the pandemic, as studios are now insisting on guaranteed longer runs for all movies, even the flops, a greater cut of the gate — now up to 65% — and the fact that major studios have begun simultaneously releasing major films directly to the public through online streaming services.

Such simultaneous releases means cutting the potential audience for theaters in half, especially with younger, tech-oriented people who don’t mind watching a blockbuster film on a 5-inch cell phone screen.

Many residents sang the blues when word that the theater was for sale hit the streets in January, after the Estero Bay News first broke the story.
Shortly after that, the marquee was changed to simply say — “For Sale.” She was asking $1.5 million for what is essentially a “turn-key” operation.
But now the marquee reads, “Re-opening March 12, 2021 Anthony Hopkins in The Father PG-13.”

“We got a picture, so I’m opening up,” Mary Lou Jannopoulos told Estero Bay News.

She noted that the State’s guidelines only allow her 25% capacity. The Bay Theater seats 314, so she’ll be allowed to officially sell about 79 seats.

The re-opening of the Bay Theater comes after the California Department of Public Health up-graded SLO County into the “Red Tier” of the Governor’s “Blueprint for a Safer Economy.”

Red is a step up from the “Purple Tier,” the strictest of the blueprint’s 4-tiered grading system and lessens somewhat the restrictions on businesses.
Jannopoulos and her daughters-in-law who help her run the theater, had already laid out the seating to achieve social distancing, so they have been ready to reopen for months.

She’s excited that the show will go on. “We’ll see how it goes,” she said, “and whether we can get movies.” Studios, “are not even servicing the theaters,” she added.

Is it still for sale? She said that lots of people have shown interest and her real estate agent has shown it to a bunch of potential buyers. Someone was supposed to make her an offer over the weekend, she said. But that’s not where her heart is.

“I don’t want to sell it,” Jannopoulos said. “I think maybe I’ll take it off the market.”

The excitement of reopening was evident in her voice. “I’m happy to be going back to work and to see all my customers again.”

As for the movie, Rotten Tomatoes said, “The Father warmly embraces real life, through loving reflection upon the vibrant human condition; heart-breaking and uncompromisingly poignant — a movie that nestles in the truth of our own lives.”

Critics gave it a 99% positive rating and RT’s audience survey was at 88% positive.