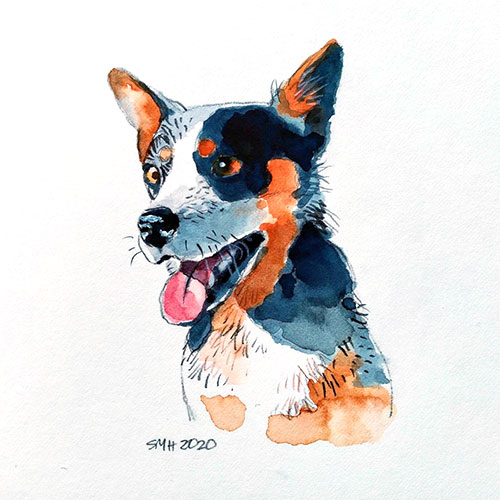 Stuart Mason’s painted animal portraits, pictured above, became his side hustle during the pandemic.

Authors note: Recently I was intrigued by a call-to-action post on Nextdoor.com. David Bradley had asked the right question to inspire others to share how they were “moving forward” financially during our worldwide pandemic. I was inspired to meet the man who cared enough about his Morro Bay neighbors to ask how they were doing and what they were producing. I’m pleased to introduce David Bradley and a few of his Nextdoor.com neighbors.

Mid-February Bradley posted, “What’s everyone doing for extra cash?” He went on to state he personally understood many have had to “pivot” to survive during this time and none of us anticipated their mainstay income would be challenged by a virus call COVID. He offered up his example “side hustle” which was a book he had self-published in 2010, How to Stop Smoking Without Killing Anyone. Although it took him eight months during the lock-down to create the new sales tool, he now has an Audible.com version of his book on the market.

“The point I’m making here is that what happens to us doesn’t define us. It’s what we do about it – and with it – that will ultimately determine who we are. We are all unique and experts at something.” Bradley then concluded we could find ways to make extra money doing something we love.

Bradley’s career is in sales. For years he was in automobile sales in Southern California. Ten years ago he began his career climb to become a Sales Training Facilitator and Coach for Cardone Training Technogies, www.cardoneuniversity.com. Get-aways for Bradley and his wife were to Shell Beach. One day he realized he could telecommute his workshops from anywhere.

“It became our dream to move to the coast,” said Bradley having grown frustrated with LA traffic. “Every where we wanted to go was 90-minutes away. So on my 40th birthday, we said ‘we’re out of here.’ We rented until we found our home in Morro Bay.”

Bradley spends most of his day online providing sales tools for his current 37 global clients. “I work with any number of companies that have a sales force or entrepreneurs working by themselves – auto, solar, insurance, water treatment, web design, even a forestry company in Canada with lumber to sell.”

In 2010 he was smoking a pack and a half of cigarettes a day so decided to sell himself on quitting. Taking advantage of a brisk marketplace for self-published how-to books, he shared his journey. In 2015 he revised and expanded the book.

“When the pandemic hit last March I didn’t know how things would go with sales training so created the audible version of my book. I figured others might be creating extra income opportunities so decided to tell my story and asked others to share their side-hustles.”

Some postings included photos of their products. They continue to come in. Here are a few samples. Individuals indicated they could be messaged at Nextdoor.com/Side-Hustle for contact information or questions:

Trista Smith is selling crystals and metaphysical items. In March 2020, Stuart Mason’s musical career and professional work at a folk museum was interrupted. He’s hoping to augment his lost income with another of his creative talents. He posted a sample of one of his animal portraits.

Freelance journalist, Neil Farrell, who writes for Estero Bay News, showed photos of the cast iron garden benches he has restored noting he’d sold one and had a children’s sized bench. He hopes folks will contact him if they have cast iron benches they want to get rid or would like to have him refurbish it.

Stephanie Raser sells her ceramics at Morro Bay’s Saturday market “right across from Central Coast Music,” she posted. Lindsey Rapone said to keep sane, she and her husband bought a cutting machine to create decals, t-shirts, and other goods. They call their side-hustle company Specks on the Beach in memory of a dog they loved.

Bradley added. “Everything in life is a choice. We can be the cause of our own change.”

And like his boss, Grant Cardone, he believes ‘Creativity Follows Commitment.’ Both men thrive on coaching others how to monetize what they love — and one can love producing even a side-hustle.