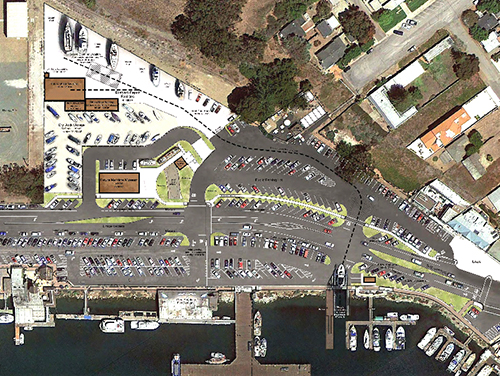 This graphic is from RRM Design’s 2016 concept plan for a boat haul out facility and repair yard in Morro Bay and where facilities might be placed and the direction a travel lift might use. Photo from City of Morro Bay

Hopes of a full service boat haul out and repair yard being built in Morro Bay have floated about for years, but now appear to have hit the proverbial iceberg and look to be sinking like the Titanic.

Harbor Director Eric Endersby said the haul out facility and repair yard idea was a City Council goal “two cycles ago” and the Harbor Department staff was diligently working on it for a few years but “It all kept coming down to money.”

Eventually, the haul out facility dropped off the Council’s radar and as of 2-years ago, was no longer among the Council’s goals, Endersby said. “No one was interested in investing $5 million to get it built.”

So recently, Endersby asked the Harbor Advisory Board, which had been the biggest champions for a haul out facility, to drop the idea until something significant happens, like an investor emerges.

Endersby said the Harbor Board’s purpose is to help the City Council implement the goals and initiatives, but with the boatyard no longer on the list of goals, he thought it might be time to let it go. The Harbor Board’s subcommittee on the boatyard should quit working on it and focus on other things.

Endersby said while a study of the needs, as in are there enough boats here to keep a full service yard busy, showed there was, the numbers weren’t there to make it profitable.

He said that nobody has been able to show how, with 450 boats in this isolated harbor, it could attract boats from other places like Santa Barbara or the Bay Area. “You need a bigger pool of boats,” Endersby said.

He added that most of the big fishing boats in the harbor haul out and make repairs when they are off fishing in other ports, making it part of their fishing trip to save the costs of transiting to a haul out yard.

Or they take the boat to places like Ventura and even Mexico, where they can get the work done cheaper.

“When the Triangle lot became ours,” Endersby said of the former power plant property at the end of Front Street where the Maritime Museum is now located, “about 5-years ago, we had Henry Pontarelli and Lisa Wise Consulting do a market analysis — expecting ‘X’ number of boats for ‘X’ number of days.” That study showed promise and Endersby said they sought to conduct an economic feasibility study.

“The market analysis was half the picture,” he said. They sought basically a business plan looking at revenues versus costs. “That hasn’t been done.”

About 20-years ago, former HAB chairman, the late-Jim Wood and some others looked at a boatyard with an ancillary business connected to it, and “even that study said it would not be profitable. We had a design firm look at that project and concluded that [it wasn’t profitable] because of the assumed acquisition costs. Then the whole area was deemed environmentally sensitive habitat [ESHA] and that killed it,” Endersby recalled.

“The financial picture has not changed, and it wouldn’t be a profit maker.”

He added that his gut feeling is that even if the City got property free and got grants to build the infrastructure, including a travel lift, it still would not be profitable. “There’s just not that much demand for it,” he said.

It should be noted that the harbor does have a small boatyard down in the 200 block of Main Street but it’s capacity is limited and it can’t lift the larger, heavier, boats in the harbor.

Most recently, in 2016 the City asked RRM Design of SLO to pencil out a boatyard project at the City’s Beach Street docks, somewhere between Stax Wine Bar and GAFCo., for the ways (travel lift ramps) and using the Triangle lot as a repair yard.

It would have required cradling the boats and driving them across Embarcadero and through the Front Street parking lot.

That exercise, Endersby said, was to see if it could all fit in that area, and yes it could, if you rebuilt the parking lots and reconfigured parking along Embarcadero, among other necessary improvements.

That penciled-in project showed a net gain of nearly 40 parking spaces but carried a rough estimate of $4 million to $5 million to build.

“They do that in Santa Barbara,” Endersby said of a travel lift carrying boats around, “and people love seeing it.”

But usage of the Triangle lot has changed in recent years, with the Maritime Museum expanding with new exhibits, and hoping to expand further with a new building, and the Harbor Department using nearly half the area for a boat storage yard.

Seven camping sites that the Harbor Department put into the Triangle lot as part of its RV camping program will have to be removed, after the City Council agreed to ban overnight camping on The Embarcadero and at Morro Rock rather than having the issue go to a vote.

The plant takes up roughly 14 acres and is zoned industrial, and thanks to a deed restriction must remain so zoned or be cleaned up at considerable expense for other uses.

The extent of any needed clean up can’t really be known until the building and stacks are removed and soil testing is done.