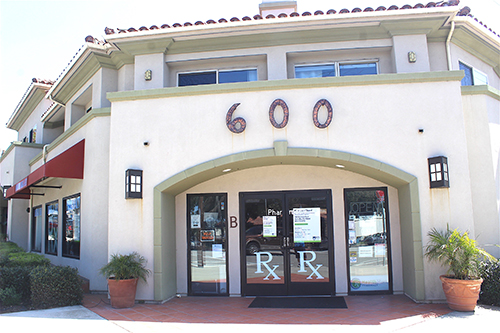 Morro Bay Drug & Gift, the last independent pharmacy in Morro Bay was recently bought out by Rite Aid and closed. All the stores customers are being referred to Rite Aid, but you must have your doctor transfer prescriptions.

With little warning, Morro Bay’s only locally owned pharmacy shut its doors last week bought out by the pharmacy giant in town.

Morro Bay Drug & Gift, which was started by Dr. John Headding who is now Morro Bay’s Mayor, was purchased by Dr. Sumanta Paul in 2019. Dr. Headding had opened the Morro Bay store after many years having a pharmacy in Cambria. He sold when he retired.

A sign on the front doors indicated that Rite Aid had bought out the little independent drug store. The sign says prescriptions are available at the Rite Aid on Quintana Road, and then gives the store’s hours and address but no other information.

A peek in the window revealed empty store shelves and display racks, with paper and debris scattered on the floor, looking much like the place was emptied out quickly.

Estero Bay News spoke with a manager at Rite Aid’s Morro Bay store who confirmed that MB Drug & Gift had been bought out by the corporation, but had little information beyond that. Apparently, no press release was sent out and, as this reporter is a customer of MB Drug, no notices were sent to customers.

EBN attempted to contact Rite Aid’s corporate media folks but did not get a response back before deadline.

What should patients do now about their prescriptions? The manager said the prescriptions would not automatically transfer over to Rite Aid and people must talk with their doctors about having prescriptions transferred to whatever pharmacy they now wish to go patronize.

Los Osos, Cambria and Cayucos each still have small independent pharmacies, otherwise, a pharmacy in Ralph’s Market in Los Osos and Morro Bay Rite Aid are the other ones on the North Coast.

Morro Bay Drug & Gift has been a leader locally in the battle with the coronavirus pandemic, offering vaccine shots last year soon after they became available and staying open all through the pandemic, even though it was tough to find employees and keep them on.

Dr. Paul, who came to Morro Bay from Bakersfield, told Estero Bay News in August 2020 that this was the first pharmacy that he’s owned.

He was just getting into a groove running the business when the COVID-19 hit in March 2020.

Contacted for comment, Mayor Headding said he had no idea this was about to happen, no warnings at all. “I was absolutely shocked,” he said, adding that a local resident had alerted him to the closure on March 31.

He said he didn’t know why it happened but has seen this sort of thing happen before. “When Med Stop closed in Los Osos,” he said, “the same thing happened.”

Typically, when a corporation like Rite Aid buys a little family pharmacy, they buy the “files” or the “active” prescription orders that have additional doses authorized by a doctor.

If a prescription has run out, they don’t buy those, he said, and a patient will have to contact their doctor to have the “dead” prescription renewed and switched to the new pharmacy, wherever they want it to go.

When he sold to Dr. Paul in 2019, Headding explained, he sold the business and the property, so Headding said he’s completely out of the loop and could speak only in generalities.

He wasn’t too surprised that Rite Aid was interested, as he was often contacted by them when he owned the pharmacy.

Asked if this was common, to close without any warning, he said unfortunately, yes.

“If physicians want to close their practice, like they plan to retire, they are required to give patients a 30-day notice that they will no longer be practicing,” Headding said. “There is no such requirement for a pharmacy.” They also tend to remain open until the last day to avoid an early exodus.

“Unfortunately,” he said, “as a patient you find out on that day [when they close], that they’re no longer going to be open.”

He too recommended former patients of Morro Bay Drug & Gift contact their doctors to have their prescriptions switched over to whomever they want to go to now. And though the choice is theirs, it can cause tensions between patients and pharmacies, Headding said.

He said Dr. Paul didn’t have it as easy as he did. When he opened the Morro Bay store, he had family working with him — a daughter who is a pharmacist, son-in-law and his wife, who is a registered nurse. Plus they’d already been running a pharmacy in Cambria for years.

“It’s not easy,” he said of being a lone pharmacist even in a little store like Morro Bay Drug & Gifts, “especially with COVID — giving shots and he was doing testing too.”

While people like nurses and even paramedics give people shots all the time, with vaccinations like the COVID-19 ones that Dr. Paul has been administering since shortly after they became available in 2021, only licensed pharmacists are allowed to give shots at pharmacies.