Bobcat ‘Aces’ Released Back Into the Wild 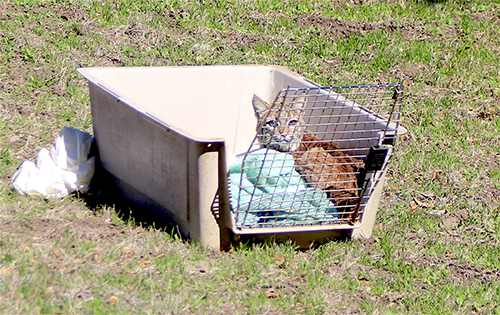 A bobcat kitten found abandoned alongside a country road in Paso Robles has been given a second chance at life after being raised and released on a ranch in the hills east of Cayucos.

Cathy Duncan, a wildlife educator and rehabber with Pacific Wildlife Care, said the kitten was just a few weeks old when a couple in Paso Robles noticed her sitting alone by the side of the road.

“She was an infant when they found her,” Duncan said. Her rescuers at first left the tiny fur ball alone, hoping that its mother was nearby. They passed it again hours later sitting in the same spot and Duncan said they decided to call the California Department of Fish & Wildlife to ask what they should do. They were told to leave it alone, Duncan said.

When the kitten still didn’t move, they decided to catch the baby and take it to PWC’s rehabilitation center located on the Morro Bay Power Plant property. That was April 29.

PWC transferred the little bobcat to the Wildlife Education and Rehabilitation Center (WERC) located in Morgan Hill, Calif., (see: www.werc-ca.org). There they specialize in taking care of bobcats, as well as numerous other types of wildlife.

“They [WERC] have a really good set up to raise a bobcat,” Duncan explained. The kitten was transferred to the Bay Area facility on May 4.

Some 12 weeks later, the little bobcat, now named “Aces,” was transported back to the Central Coast and released onto the 1,200-acre ranch of Kelly and Art VandenHeuvel, located at the very end of Montecito Road.

Kelly, who is also a wildlife educator, rehabber of raptors, and founding member of PWC, has been involved in the organization since the early 1980s and over the years has nursed back to health numerous birds of prey — from golden and bald eagles, to hawks and even a peregrine falcon.

Her remote ranch backs up to the Coast Range and the Los Padres National Forest is just over the hill. It’s perfect habitat for a little predator.

Aces became the fourth bobcat PWC and WERC have released on the ranch. Two years ago, they released three bobcats in the same remote oak wooded natural creek on the ranch that Aces now calls home.

“It’s a perfect spot,” Kelly said. “There are no cars, no people, so she’s not in danger.” There is also fresh water in the spring-fed creek and lots of field mice, wood rats and ground squirrels for supper, too.

McKenzie Colbert and her mom Suzanne, work with WERC’s bobcat program, where they take care of dozens of the little cats every year. Suzanne said they use “aversion therapy” when rearing bobcats, going so far as to don a rather cute bobcat “costume” when they feed, to minimize their association of people with food.

They learn that humans are not their friends, she said. The little ones they get do require some veterinary care when they come in, just as house cats might need to see the vet.

So a small caravan of cars, with Aces, now weighing a healthy 15 pounds, in a pet carrier, traversed hill and dale on the rugged road through the ranch, with the resident herd of cattle taking moderate interest in the procession.

At the release site, the Colberts carefully cut away the zip ties holding the two halves of the pet carrier together, as Aces hissed and swiped at them, a good sign that she was wild enough to release.

But when the top came off, Aces stayed put and wouldn’t leave the box! A good 10 minutes went by, as she cast the evil eye to the people gathered to watch from a safe distance away, including this photographer.

But eventually, with a little coaxing, Aces clambered out of the box and stalked away into the shadows of the giant oak trees, a free cat once more.

PWC’s Duncan said Aces was the fourth bobcat they’ve gotten in this year and the only baby. The three others didn’t fare so well, she said.

The first one they got had been hit by a car and they couldn’t save it.

The second arrived at PWC already dead and the third came in greatly dehydrated and emaciated. It died within 24 hours, Duncan said.

Bobcats rarely come into PWC’s incredibly busy rehab center, which takes in most any wild animal, though they have partners like WERC where the hard-to-handle animals they get in are sent. PWC deals largely with sea birds and is licensed to respond to oil spills, like the recent one off Southern California, to care for oiled wildlife.

PWC’s educational program, which will return in January with the 2021 Winter Bird Festival (MLK holiday Weekend), has numerous birds of prey — owls, falcons and a blind red tail hawk named Denali, which Kelly cares for full time — as well as a possum and other critters.

PWC has grown a lot from what started as a loose-knit group of caring volunteers that took in sick, injured and orphaned wildlife in some cases nursing them inside their homes.

In the early 2000s, former power plant owners Duke Energy leased them a small plot of land on the southeast side of the plant, to establish a rehabilitation center.

Duke also leased property to the Marine Mammal Center, which operates a triage center for sick and injured marine mammals in conjunction with MMC’s main facility in Sausalito.

But PWC, which now takes in nearly 3,000 wild animal patients every year, from over 200 different species, has outgrown its Morro Bay facility and is on a fund-raising campaign to build a new, state-of-the-art, rehab center on a piece of property out by the SLO County Airport.

If readers would like to know more about PWC and its mission, would like to volunteer, or to donate to the capital campaign, see: www.pacificwildlifecare.org or call 805-543-WILD (9453). And use the phone number to report sick, injured or abandoned wildlife, and volunteers will come to the scene to evaluate the animal.

And hopefully, the next helpless bobcat kitten that’s found abandoned by the side of the road, will be as lucky as little Aces was to have people who care about wildlife step in and save them, too.