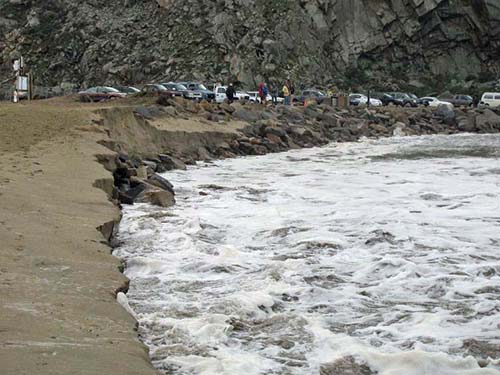 This photo by Ron Reisner of the rock revetment at the Morro Rock parking lot that’s been washed away, is an example of the types of maintenance work that’s needed in Morro Bay, which he and others hope to address with a parcel tax on private property.

A small group of concerned citizens says the Morro Bay Harbor Department is sorely underfunded and in need of a revenue boost to catch up on much needed maintenance of City-owned facilities.

Bill Luffee, Homer Alexander and Ron Reisner have launched a voter’s initiative petition drive to get a “parcel tax” on all private property in the City included on the November 2022 Ballot, pledging that all the money raised will be used to restore and preserve the jewel of the City, it’s harbor.

Alexander, Luffee and Reisner sat down with Estero Bay News to discuss the issue and why they feel a tax is warranted.

Alexander said they’ve come to the conclusion that the Harbor Department needs more revenue in order to fix a long list of deficiencies in its maintenance. “This has been going on for years,” he said, adding there’s been a lot of talk about the problem but nothing gets done.

Normally, a taxing measure is placed before voters by the city council, as was done in November 2020 with Measure E-20, a 1% sales tax put on the ballot by the council. Taxpayers rarely seek to tax themselves, but the three said the situation is critical, as the list of unfunded maintenance needs grows longer and more costly as facilities — T-piers, slips, docks, sea walls and the public launch ramp — fall further into disrepair.

Reisner said, “The three of us kicked the issue around and drafted basic concepts, then we sent it to our attorney to ‘legalize’ it.”

He and Luffee know the situation firsthand, as both have served for years on the Harbor Advisory Board including stints as chairman, though Reisner is no longer on the board. Luffee is also one of the founders of the Friends of the Morro Bay Harbor Department citizen’s group.

Alexander also has a history of serving on City advisory boards, including the Citizen’s Finance Committee, which was formed in 2007 with the passage of Measure Q (a half-percent local sales tax).

The Harbor Department and City Council have been discussing ways to increase the department’s revenues, which derive almost entirely from lease site rents and dockage and slip fees, coming up with lots of possibilities that includes trying to get a permit for a permanent RV camping program along the Bay. But for the most part, nothing’s been done.

The City is also looking into making the Embarcadero a paid parking zone, but that money couldn’t go to the Harbor Department per se, it has to be spent on establishing more parking.

They decided on a parcel tax — wherein every private property owner is charged — was the best solution.

Their parcel tax measure would add $120 a year or $10 a month to the annual property tax bills, which most people pay in two installments a year. It would also have an inflationary clause, meaning the charge would be adjusted annually by the rate of inflation.

And because it’s a citizen’s initiative, it only needs a majority (50%+1) for approval. Normally, if a city places a measure on the ballot, depending on how it’s slated to be spent, it could need up to two-thirds approval, if designated for a specific purpose, and a simple majority for general fund taxes.

According to the City Clerk, Dana Swanson, as of an Aug. 30, 2021 registration report, “there are 8,268 registered voters in the City of Morro Bay, so 827 valid signatures are needed to qualify the petition. Elections Code § 9208 provides that proponents have 180 days, from date of receipt of ballot title and summary from the elections official, to collect signatures and file petitions with the City Clerk’s office.

The City completed that task on Nov. 9, so the petition drive deadline is set for May 9 (180 days would actually be May 8 but Swanson said that’s a Sunday).

She will then have to verify the signatures with those on file but if all goes well they anticipate the measure going before voters at next November’s General Election.

Luffee, Reisner and Alexander will be going door-to-door to talk with voters and ask for signatures, which they admit is a tall task but probably the best way to go about it.

They also have to make sure the addresses accompanying the signatures are correct or that could also invalidate a signature.

Luffee said the $10 a month or $120 a year will amount to $680,000 a year going to the department, which still isn’t enough to pay for everything, but it’s enough to start making a dent in what’s needed to be done.

That money can also be leveraged against grant funding that might come available or even for a loan. “It all goes to the harbor,” he said.

Alexander also noted that their proposed ordinance, “The Morro Bay Harbor Infrastructure Act,” would go into the City municipal codes as Chapter 3.27, includes having the city council form a citizen’s oversight committee to watchdog the spending of that money.

The three stressed that this all relates to the City’s infrastructure and not the maintenance that needs to be done that is the responsibility of the various leaseholders.

Reisner said the harbor department has line items in its budget for these needs stretching out 10 years, and “It’s every bit of $10 million.”

He produced a list of projects and estimated costs that he put together with his knowledge of what these might cost, as he’s by profession a marine surveyor. He pegs the need for the wharfs and piers at $600,000; $3.4 million for sea walls; $1.6 million for rock revetments; $50,000 for repairing docks and slips; $1.5 million for restrooms; for a total of $7.5 million.

As for replacement needs, he listed $6.14 million for docks/slips; $2.2 million to repair the concrete launch ramp; for a total of $8.34 million.

The City is prohibited from taking an active part in the coming campaign, should the petition drive be successful, but they don’t have to sit entirely on the sidelines. City Clerk Swanson said, “The City may not use ‘funds of the local agency to support or oppose the approval or rejection of a ballot measure’ (Govt. Code § 54964(a)). However, in general, City funds may be used ‘to provide information to the public about the possible effects of a ballot measure on the activities, operations, or policies of the local agency’ through ‘an accurate, fair, and impartial presentation of relevant facts to aid the voters in reaching an informed judgment regarding the ballot measure.’

The City Attorney has completed his part in this — giving the measure a title and producing the summary that will appear with the sample ballot booklets before the election.

EBN asked Harbor Director Eric Endersby, who as a City employee is prohibited from getting too involved, about these many needs and how he goes about fulfilling them?

He said, “As to our budget and CIP [Capital Improvement Program], while I don’t know about the rest of the City, the Harbor Department has never had a formal, funded CIP program. We’ve always just done projects on an as-needed basis and as funds were available.” (Developing a CIP is one of the ways to organize an agency’s needs, prioritize them and plan on how to pay for them.)

“When Colonel Dave [Buckingham] was the City Manager,” Endersby said, “he required every department to list their Capital assets and replacement costs. That was the genesis for the current Capital asset spreadsheets we have here at Harbor and continue to update and refine with the assistance of an ad-hoc committee of the HAB.”

They have three such spreadsheets:

• Capital Replacement — all the things that will eventually wear out and need replacement like a set of docks;

• Capital Major Maintenance — all the things, mostly piers, that you don’t typically replace in-whole at any point, but just do periodic major maintenance and repair cycles on; and,

He added, “If we were to replace and repair everything on-schedule and per their useful lives, as opposed to funding the thing in the worst shape when and if we have the funding, as we typically have in the past, per current estimates we would need about $800,000 per year starting today for the next 10 years.

“Unfortunately, we’ve never exercised funded depreciation to put money into dedicated ‘buckets’ for all our capital needs, so many of the things we need to replace now or in very few years have never had money set aside for them, so we’re way behind the funding 8-ball so to speak.”

One of the glaring needs is the poor condition of the public launch ramp, which Endersby has been trying to get repaired through the State Department of Boating and Waterways grant monies. The concrete ramp is deteriorated considerably with large holes in the concrete surface as it dips into the water.

Another looming problem is a failing sea wall at the Inn at Morro Bay, which threatens to collapse and take a sizable chunk of the Inn’s parking lot with it. Reisner said if that fails the City could be liable for the fix, and under an emergency situation.

Alexander said their experience with Measure Q (in 2006), which was approved at a time when the fire department’s Harbor Street station was condemned after the 2003 San Simeon Earthquake and the department moved into temporary quarters, taught them that they needed to tighten up the language of this tax measure, “so it’s only used for City-owned infrastructure.”

Luffee said, “We’re trying to get something done. We’ll see if the voters believe the Bay is the jewel of the City and see if they want to maintain what we have.”

← Previous: Bobcat ‘Aces’ Released Back Into the Wild From Me & CJ to You: Merry Christmas →