By the Sea Productions: Back & Better Than Ever 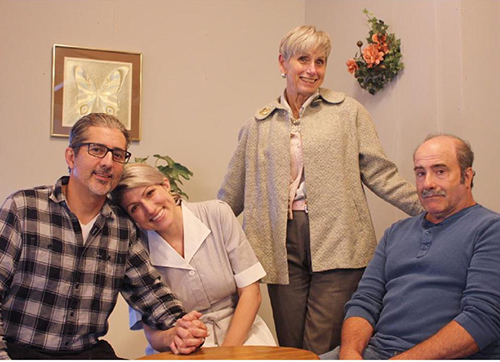 Cast of By the Sea’s production of ‘Now and Then’ featuring Robert Vaca, Nayla Paschoa, Michelle Turner and Seth Blackburn.

What would you want to be remembered for? This is just one of the questions posed in a recent production of live theatre at By the Sea Productions based in Morro Bay. Throughout March and April, the managing troupe sparked by their active board of directors, including former mayor Janice Peters, had been out and about on the Embarcadero, at Chamber mixers, Shop-Sip & Stroll, and Saturday afternoon community markets — wherever gatherings happened — promoting that Morro Bay’s theatre season had finally launched.

Plays and staged readings are now scheduled for the 2022 season. Performances are in rehearsal for their first full play June 17-July 10, and in fact, three staged readings have already been performed to appreciative audiences Fridays, Saturdays, and Sundays at 545 Shasta Avenue. The community continues to thank St. Peter’s by the Sea Episcopal Church for their generous sharing of their hall to stage their productions. Their history, schedule and even how to buy tickets are at www.bytheseaproductions.org.

So back to my story, along with other Morro Bay Chamber of Commerce members and guests, I witnessed a mini performance intended to demonstrate the concept of a “staged reading” at April’s monthly “Breakfast by the Bay.” Such readings are typically scheduled while prepping for larger productions such as the June “sophisticated hoot” of comedy “Social Security” directed by Lisa Woske and August’s drama “Murder on the Orient Express.”

Three cast members of “Now and Then” authored by Sean Grennan and directed by Nicolette Tempesta, teased us with unanswered questions due to be answered during their performance the following weekend. Literally, Robert Vaca, Seth Washburn and Nayla Paschoa performed the staged reading and left us wanting. The buzz around the room was, “More, more!” and “I need to go to find out what happens.”

I was one of the “need to know” folks in the room! I was not only curious about the twists anticipated in the script, but I was mesmerized by the talent of the players. Peters indicated a benefit of COVID-19 might be the new talent that has surfaced and found their way to auditions at By the Sea Productions while the rest of us anticipated live theatre would continue to be included in our Morro Bay new-normal lives.

However, I admit my impression of a staged reading—pardon my novice experiences, Janice—was a couple of actors sitting on stools, holding the script, and reading it as if in rehearsal. These players knew the script and action so well that I forgot they were holding the script since they rarely referred to it. After the breakfast, I called my family-friend, Mandy Sahota-Flood, and suggested instead of going to lunch for her birthday, she might prefer attending this staged reading. We had a new plan – and a reminder local community theatre was an entertainment option.

Once Mandy and I were seated at the playhouse – don’t forget your proof of vaccination – I realized the two-act reading had a fully staged set and, yes, scripts were in hand, but the professional acting performed was so much more than any dramatized reading that I had experienced before. I laughed. I cried – (I always do in happy outcomes). Mandy and I talked at intermission how relevant the questions posed in the reading were to anyone’s/everyone’s life experiences – would we want to go back and change anything in our lives? We thought our husbands would have equally enjoyed the production. We tried to anticipate the second act’s resolution. Where would the actors and action would take us? And yet I was again surprised by another new talent, Michelle Turner, and yet another twist for the ending.

Yes, I’m being cryptic because I’m hoping “Now and Then” might return for another performance weekend so others might enjoy and ponder the same “what ifs” Mandy and I were able to discuss. And isn’t that what live theatre is all about? Seeing life unfold on stage and recognizing the relevance of our own experiences — sparking conversations among friends and family or at the very least provoking ideas to think about in our alone quiet times?

Of course, live theatre can also be just a lot of fun, a time to get beyond our daily duties and smile at the absurd or even belly laugh at the ridiculous, recognizing much of life’s silliness around us could easily prompt an appropriate move-forward action like “just-get-over-and-beyond-it.”

I’m thinking this weekend’s May 27-29 staged reading might fulfill either of the above stated purposes of live theatre. The billing is “Church & State” by Jason Odell Williams and directed by Janice Peters. The promotion states, “Religion, guns, and politics collide in a thought provoking, non-judgmental drama.” And it’s only $15! Tickets are at bytheseaproductions.org or call 805-776-3287.

By the Sea Productions has teased and intrigued me again. See you there?