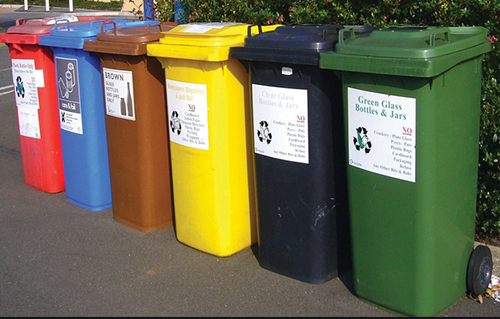 Seems the price of literally everything — from a gallon of gas to a gallon of milk — has increased greatly in price, as Putin’s price hike spreads throughout the economy. So it shouldn’t be a surprise that garbage rates also appear heading steeply upwards.

But the newest rate hike for customers of Morro Bay Garbage Co., i.e. homes and businesses inside the Morro Bay City Limits, can’t be blamed on a faraway dictator, this one’s home grown.

The City of Morro Bay has just sent out notices of an upcoming Proposition 218 protest vote against a nearly 14.5% increase in the monthly garbage rates.

Monthly bills are slated to jump 9.07% starting July 1, for the garbage, recycling and yard waste service, according to the City’s notice. That rate hike is being driven by new State mandates.

A digester facility is required to comply with State Senate Bill 1383 (SB 1383) which was passed purportedly to divert food wastes from the landfills, and curb the release of methane caused through the natural decomposition of organic matter.

“Methane,” the City said, “is a potent greenhouse gas, with more than 80 times the warming power of carbon dioxide, and is a major component of decomposing organic waste.

“In response to the harmful effects of methane gas, CalRecycle [a branch of the California Environmental Protection Agency] adopted regulations implementing SB 1383 in the fall of 2020. Key components of SB 1383 include implementing organic waste collection programs [including food waste], monitoring organics carts for contamination, and reporting data.”

The law requires local jurisdictions to “develop a program to divert organic waste from landfills to an authorized composting facility like an anaerobic digester.”

According to the Environmental Protection Agency website: “Anaerobic digestion is the natural process in which microorganisms break down organic materials. In this instance, ‘organic’ means coming from or made of plants or animals.

Ironically, one of the main byproducts of anaerobic digesting is “biogas” composed mainly of carbon dioxide and methane, both of which are considered greenhouse gases.

“The carbon dioxide and other gases can be removed,” the EPA said, “leaving only the methane. Methane is the primary component of natural gas.” It’s also the element that the State is trying to cut down on with SB 1383.

Of the 9.07% increase, 2.62% of it is going to “capital investment costs of new collection vehicles [garbage trucks], replacement containers and additional containers to meet the demands of SB 1383 compliance,” according to the notice.

Some 5.23% is “for increased capital equipment investments and escalating operating expenses related to the Anaerobic Digester.”

With the rates going up to cover the State’s mandates, a local mandate will add another 5.4% to the bills. The Integrated Waste Management Authority or IWMA, enacted that increase.

IWMA is a joint powers agreement agency consisting of every incorporated city in SLO County, plus community services districts, which came together as a regional agency to oversee garbage and hazardous waste disposal services and make sure the various laws are adhered to.

Ironically, the only agency not included in the countywide IWMA is SLO County.

County Supervisors voted to pull out of the IWMA and handle solid waste responsibilities in house through the Engineering Department. That system would oversee garbage service in Cayucos and Los Osos.

Morro Bay was apparently targeted by the IWMA for a rate hike. “At the IWMA Board Meeting of March 9, 2022,” the City report said, “the IWMA adopted a 5.4 percent solid waste management fee upon Morro Bay Garbage’s gross receipts to account for IWMA’s operational and capital cost increases due largely to tasks associated with the implementation of SB 1383.”

So what will Morro Bay ratepayers get for that 5.4% hike? “Education and outreach monitoring,” the report said, “inspection, and record keeping programs; establishing, administering, and implementing the edible food recovery requirements; monitoring and education, including, but not limited to, monitoring compliance through route reviews and evaluations, determining the applicability of waivers, and issuing educational notices where necessary and/or appropriate; and required reporting to CalRecycle.

“The adopted fee will be effective on July 1, 2022. The City has authorized Morro Bay Garbage to bill this additional fee on behalf of the IWMA.”

It will be adopted unless the people successfully protest the rate hikes. The City has scheduled the protest hearing for 5:30 p.m. Tuesday, June 28 during the regular City Council meeting at the Vet’s Hall, 209 Surf St.

Each private parcel in town gets one vote in a Prop. 218 process. The voter can be either the property owner, or a renter if their name is on the garbage bill. Protests must be made in writing, as emails do not count, and neither do faxes.

You can also drop off protest votes at Morro Bay City Hall prior to the meeting, or at the Council hearing if you plan to attend in person now that the Council’s Coronavirus Zoom meetings have ended.

According to the City notice, “A valid written protest must contain: 1) a statement that you protest the Proposed Rate Increase; 2) the address or Assessor’s Parcel Number (APN) of the parcel or parcels which receive solid waste, recycling, and green waste services; and, 3) a signature by either the owner or the tenant-customer of the parcel or parcels.”

Readers who support the rate hikes needn’t do anything. In the Prop. 218 process, not voting goes down as a “Yes” vote.

If over 50% of the ratepayers protest the rate hikes, the City Council can’t enact them but will still be on the hook for the increased costs to the garbage company, which has a contract guaranteeing a certain profit margin and mandated cost increases be covered.

The notice is available online at: www.morro-bay.ca.us/DocumentCenter/View/16637/Morro-Bay-Prop-218-Notice—Final-002.

← Previous: Project Would Replace Part of Whale Rock Pipeline By the Sea Productions: Back & Better Than Ever →