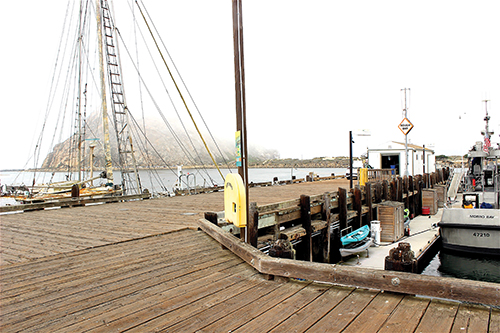 The North T-pier in Morro Bay will get an upgrade with monies secured by Congressman Salud Carbajal.

Our local Congressman recently brought home some hefty bacon, securing several millions for local projects including a sizable chunk for repairs to the North T-pier in Morro Bay.

Congressman Salud Carbajal (D—Santa Barbara) announced that he’d secured $4 million in funding in the new fiscal year 2023 budget. The money would “provide funds to help construction of a new 101 interchange in San Luis Obispo, renovate a key bridge in Arroyo Grande, and make upgrades to a critical multi-use pier in Morro Bay,” reads the news release.

“I am proud,” Rep. Carbajal said, “to have secured more than $4 million for San Luis Obispo County that will improve our quality of life once approved by the Senate and signed into law for the upcoming fiscal year. With these funds, we will be able to make critical upgrades to our roads and highways, bridges and piers to keep commerce and people moving smoothly throughout our region.”

The money was part of Carbajal’s larger securing of $22.46M for 14 projects Carbajal pushed through for his district. The local projects were:

• Some $2.06M towards building a long awaited overpass and interchange on Hwy 101 at Prado Road in SLO. That overall project includes a new bridge, on and off ramps on both sides of the highway, auxiliary lanes on Hwy 101 and separated sidewalks and protected bike lanes for both sides of Prado Road.

SLO Mayor Erica Stewart was grateful. “We greatly appreciate Rep. Carbajal’s including the Prado Bridge replacement project in his request for Community Project Funding,” the Mayor said. “Replacing this 70-year-old bridge with a structurally sound bridge that includes bike lanes, improved lighting, and pedestrian walkways will make the intersection safer and prepare the intersection for the future Prado Road overpass.”

• Some $500,000 for the rehabilitation of the historic “Swinging Bridge” in Arroyo Grande’s Village District.

The T-pier, which got a major repair job just a few years ago, is being eyed for future use in support of the proposed offshore floating wind energy farms being reviewed by the Federal Government right now.

Mayor John Headding said, “From the US Coast Guard to local fishing companies, tourism, and the soon-to-come offshore wind energy industry, this project will have many dramatic positive impacts on safety and our economy locally and regionally. We could not undertake this work at this time without the federal funding secured by Rep. Carbajal.”

Just what is the City being asked to provide for this new energy industry? Harbor Director Eric Endersby told Estero Bay News that they’ve been working with Castle Wind, one of the potential bidders for an offshore wind lease, and they’ve also been contacted by some of the other dozen or so companies that have shown interest in the bidding.

Endersby said they haven’t been handed a list of things the wind industry is seeking, “except accommodation for 60-foot and 200-foot boats; the former for crew transport back and forth on a daily basis, and the latter for larger work efforts that require several days and the boat staying out there and supporting the operations.

“All companies seem to have some version of this; and some sort of land side office space. But nothing is definite yet — they are just getting the lay of the land for now.”

The Bureau of Ocean Energy Management (BOEM), which is handling the leasing of the so-called Morro Bay Call Area — a sizable patch of ocean offshore from San Simeon — is expected to auction off three lease sites some time in September.

EBN asked Endersby if he expects all three companies to establish headquarters in Morro Bay? “I would assume all will want O&M ops out of MB because it’s closest and the most protected,” Endersby said.

While he is grateful for Carbajal’s efforts, he’s way short of what he needs to do all the repairs needed on the North T-pier, which dates back originally to World War II when the Navy used Morro Bay Harbor for an amphibious landing training area.

The Harbor department did an engineer’s assessment done on the North T-pier, Endersby explained, which identified a lot of work to be done. “On the pier,” he said, “all of those utilities are very old and degraded and in need of replacement, and there is still a bunch of structural work identified in an engineer’s report.”

Endersby said big jobs like this are normally done in small pieces. “Typically, piers are not replaced in-whole like slips and docks eventually are,” he said, “but historically get major repair and maintenance episodes about every 20 years. The last one was about 10-years ago to the tune of about $800,000, and I would call it a ‘moderate’ effort, with lots still needing to be done.”

He added, “Carbajal picked up $1.5M of our request, which will take care of a significant portion of the overall needs, which is funded we will prioritize and execute.”

The Harbor Department, which has always had issues with building up reserves for major capital projects, which end up being put off sometimes for decades, until grant funding can be secured. The department has often worked grants form the California Department of Boating and Waterways, to assist with its big-ticket items.

Whatever the T-pier needs, predates the offshore wind farm idea. “All these needs have been needs since before offshore wind (OSW) came to town,” Endersby said, “but assuming that industry will likely utilize a portion of that pier, the timing is right to get the pier up to snuff in anticipation of that.

Prospects for offshore wind, which has a long ways to go in terms of environmental review and permitting, let alone actual construction, and one of the pluses put forth by BOEM is a company’s willingness to work with the local community and stakeholders, like commercial fishermen.

“Several OSW companies have come to town anticipating some of their operations being based in Morro Bay [likely operations and maintenance “O&M,” and not construction and deployment],” Endersby said, “and come to see what the playing field looks like, but aside from the City’s agreement with Castle Winds to use the old power plant outfall tunnel, there are no agreements nor have we received anything in writing from any company about what they will need or want to do. It’s all still pretty preliminary.”

And having the wind farm companies using the North T-pier is in itself potentially problematic, as the west wide of Embarcadero including the water facilities, is reserved for the use of commercial or sport fishing, as laid out in Measure D, a 1980s voter initiative that rezoned the area.

“I assume OSW coming to town for O&M,” Endersby said, “will have them at this end of the bay because of the piers and deeper, wider channels, which is going to force a community discussion on Measure D.

Measure D says all uses be “primarily for the purposes of serving or facilitating commercial and recreational fishing,” which offshore floating wind turbines clearly are not. Indeed, commercial fishermen have come out strongly against the wind farms.

“In an ideal world,” Endersby said, “that discussion can take place and result in OSW being accommodated AND commercial fishing needs being evaluated, consolidated and better anchored by way of a revised Measure D and/or some other mechanisms like commercial fishing master plans and facilities.”

A timely idea when it was enacted, Measure D halted what seemed like a steady march towards turning all of the harbor facilities into tourism uses, and preserved a portion of the “working harbor” tradition that Morro Bay used to pride itself on.

The law has never been challenged in court and today, with the fishing fleet greatly depleted due mainly to fishing regulation changes, its time may have passed.

“In my opinion,” Endersby said, “as Measure D stands, it really doesn’t do a thing to ‘save’ commercial fishing. You’ve been here long enough to see the changes; the fleet is a shell of its former self, and Measure D has done little to ‘save’ it. Remember the trawlers stacked on both the piers? Look out there now — it’s a ghost town. Obviously heaps of new regulatory and spatial restraints have taken their toll, but it’s also a supply and demand and marketing/market access thing.”

Trying to save a way of life by passing zoning ordinances, isn’t enough when an industry has what commercial fishing has got stacked up against it.

“You can’t codify an industry into existence; lots more has to happen,” Endersby said. “If all those things could be addressed as part of the OSW/Measure D discussion and some strategic fishery planning could take place, including really addressing infrastructure needs, I think it would do a lot more for the commercial fishing industry than Measure D ever has.”