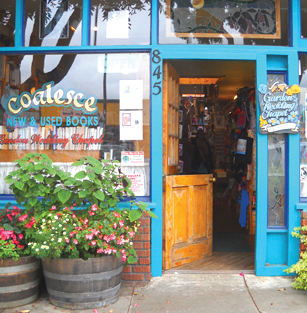 Announcement! Announcement! Be sure to calendar Friday, March 4 and book your reservations to dine with this year’s elite honorees! The Morro Bay Chamber of Commerce has wisely postponed the 2022 Awards Night Gala, so all will feel comfortable to mix and mingle.

CEO/President Erica Crawford said, “We had hoped to kick off the new year in January installing our 2022 Board of Directors and celebrating the Morro Bay honorees for Citizen, Business, Living Treasure and Non-Profit of the Year, but we felt it safer for all to wait another month.”

Now I have the distinct honor to shout out the laurels of two of our city’s honorees in this issue of EBN and then looking ahead before the big gala event, I will preview Chief Cox and Ms. Truesdale.

Coalesce Book Store & Wedding Chapel has been owned and operated by Linna Thomas since 1973 with the original near where The Blue Sail Inn now stands overlooking the Embarcadero.

The founding philosophy of the store is inherent in its name. The word “coalesce” means to grow together, to unite.  “That joining has always been the aim of the bookstore,” says Linna. “We wanted everyone to feel comfortable at Coalesce, to find something of value.”

In the early 80s the move to 845 Main Street expanded their book offerings and gift sales, added a lush garden meditation courtyard and a chapel designed and built by Cal Poly students. Linna explained the expansion allowed Coalesce to share “our own backyard” for community activities. Not only locals, but also out-of-area visitors booked their weddings, anniversaries and other small-venue celebrations in the garden chapel.

Intimate musical concerts have been performed often produced by the SLOFolks Concert Series. Linna recalled some notable performances: “Lawrence Juber, who played guitar for Paul McCartney and Wings; Chris Hillman, who played with the Byrds; Utah Phillips, a master musical storyteller; Peter Ostroushko, a violinist and mandolinist, who performed regularly on A Prairie Home Companion, and always an annual favorite to sell out the house was Peppino D’Agostino, who played at Coalesce for almost 30 years and also performed at the Performing Arts Center.”

Besides supporting local musicians, Coalesce has always supported writers whether on book tour or kept in a special section for local writers in the shop. The store offers and promotes book signings to introduce authors to the public. Linna also hosted the Central Coast Writers’ Conference Presenters Social for several years bringing award-winning authors, agents and publishers to seek new talent, write, teach and visit Morro Bay, most likely for the first time.

Coalesce has also published several books, including poetry anthologies contributed to by local poets. “Second Sunday at Seven was an open-mike poetry group that we sponsored in the Chapel for many years,” explained Linna. “First it was hosted by Carne Lowgren, later by SLO Poet Laureate Jerry Douglas Smith and mystery author Sue McGinty.” She anticipates Misty Wycoff will soon revive it. “We’ve also welcomed hundreds of classes and workshops over the decades, limited only by people’s interests and imagination. Shoosh Crotzer offers a weekly yoga class; we offer a monthly Buddhist meditation; and SLO Hospice has a free grief group that meets once a month.”

Linna said, “In 2020, we closed for three months, March 19-June 1. It was a shocker for a business that had never closed more than four days a year. As we canceled all chapel activities – a full springtime, summer and fall for wedding bookings, we also had to scramble around madly and, overnight, turn ourselves into an on-line/phone order business. We delivered books locally for free and immediately instigated curbside pickup. We heard from people near and far, Florida, Oregon, Washington, Nebraska, all over California. The huge groundswell of support was amazing and heartwarming. Being involved in our community is what all of us at Coalesce love best, that and selling books that we believe can help change lives.”

Nonprofit of the Year

Happy 75th Anniversary to the Morro Bay Lions Club! It is the oldest service organization in Morro Bay and the members value their club’s net worth by the number of services they can offer locally and internationally.

For years membership has remained steady at 30 and yet the Lions most recent free Community Thanksgiving Dinner event attracted 60 volunteer helpers. It has been a tradition for the MB Lions to collaborate with other local volunteers to produce a variety of community needed activities such as feeding the hungry, providing laundry service for those in need, collecting recyclables in order to expand food distribution, paying for eye exams and glasses for those without insurance, and even cover needed eye surgery available through the Lions Eye Foundation.

Although challenged, Lions’ ability to serve was not interrupted even by recent pandemic events. Lions continued to partner with Todd’s Garage to service and give away 35 vehicles over the past eight years, which is so critical for families and individuals to seek and maintain work. A recycling program was started in 2016, and in 2021, Lions collected and redeemed more than 16,000 pounds of glass and hundreds of pounds of plastic and aluminum. All proceeds went to charities.

The Monday night dinners at the Morro Bay Veterans Hall are sponsored by Morro Bay Lions. Over the past nine years, more than 30,000 meals were served to the city’s hungry without fail every week.

Although the City of Hope is not a local organization, people from Morro Bay take advantage of their many services, which Lions support.

Members of the Morro Bay Lions are honored to be introduced in their 75th year as Morro Bay’s Non-profit of the Year and look forward to seeing everyone at the Gala event on March 4.