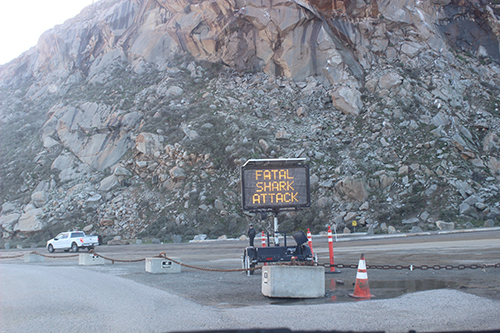 Morro Bay’s beaches returned to a semblance of normal, days after a Christmas Eve shark attack took the life of a Sacramento man who was in town to celebrate the holiday with family.

The Dec. 24 attack happened about 10:30 a.m. on Morro Strand State Beach, some 100 yards north of the Hwy 41 (Atascadero Road) beach access point, according to Harbor Patrol Officer, Stella Nicodemus, who was one of the first rescue people to arrive on scene.

A woman surfer, identified only as “Rebecca” in various reports, spotted a boogie board in the surf and when she investigated, discovered the unresponsive victim face down and still attached to the board by a leash.

She brought the victim to shore with assistance of others on the beach who called 9-1-1 but the man was already dead.

The victim, identified as Tomas Butterfield, 42 of Sacramento whose mother lives in Morro Bay, was visiting for Christmas and had gone boogie boarding alone that morning.

The shark is believed to have been a great white shark, but authorities have not ruled definitively that was what attacked Butterfield.

Great whites have been seen in area waters many times, causing warnings and beach closures lasting sometimes several days to give the shark a chance to move along. Harbor Director Eric Endersby said they had not had any shark sightings in the days leading up to the attack and while the white shark has not been officially named as the culprit, it’s the only shark big enough to inflict the damage suffered and is found in local waters.

He said that day there were about 25-30 people surfing further down the beach that morning. He said the woman who pulled the victim from the water was out surfing with her husband at the time and she was inside the main break closer to shore when she discovered the body.

There was a strong northerly current at the time, Endersby said, when she noticed the boogie board in the surf. She gave the board a tug, “That’s when she realized it had someone on the other end,” Endersby told Estero Bay News. The leash was still attached to Butterfield’s arm.

They were in about waist-deep water, he said, and she hailed some bystanders on the beach.

Morro Bay police officers were first on scene, Endersby said, with harbor patrol soon to arrive, driving their truck down the beach. Butterfield was wearing a wetsuit and fins, which Endersby said is normal gear for boogie boarders.

Details of the attack will likely never be known and no witnesses to the attack have stepped forward to tell what they saw. For surfers on Morro Strand, he said, they would normally sit on their boards waiting for waves in 10-12-feet of water, so the shark was likely close to shore when it struck.

The woman who discovered Butterfield was in 6-8-feet of water at the time, Endersby said.

He said after the attack, they sent a harbor patrol boat out to try and locate the shark and contacted three guys surfing near Morro Rock. Nicodemus, who was also on board, shouted out a warning about the fatal shark attack and, “I’ve never seen anyone get out of the water so fast,” Endersby said.

He said they posted the beach and surfers took heed. Christmas Day (a Saturday) was bereft of wave riders. “From Morro Bay to the Cayucos Pier,” he said, “It was the day that nobody surfed.”

But by that Sunday, he said, people were starting to get back into the water and on New Year’s Day, nearly 3,000 people turned out for the Cayucos Polar Bear Dip.

He noted that they left the shark warnings signs up for 72 hours and the City’s electronic boards — flashing “Fatal Shark Attack” and “Enter Water at Own Risk” — were left out at Morro Rock and along Atascadero Road for a week.

One other factor that may have played a part were the pre-Christmas Eve storms, which carried a lot of silt with the runoff into the bay and ocean via storm drains. “The water was getting a little chocolatey,” Endersby said of the poor visibility.

Big great white sharks have been spotted numerous times over the years in Estero Bay waters, and some credible sightings have noted fish 18-feet long.

The last fatal shark attack in Morro Bay happened in 1957, according to an article from the time that The Tribune reprinted Jan. 3 in David Middlecamp’s history column.

That victim was Peter Savino, 25 of Brooklyn N.Y., who was a Korean War veteran and a freshman at Cal Poly at the time. He and some friends on April 28, 1957 decided to go swimming on Morro Strand at 35th Street (at what’s now the southern edge of The Cloisters neighborhood), which is coincidentally not far from where this latest attack occurred.

Savino and another friend were 300-400 yards offshore, after being caught in a rip that started pulling them out to sea. His friend reportedly saw the great fish attack Savino.

The Tribune story said a Coast Guard launch spotted a 20-foot great white shark in the area after the attack. Savino’s body was never recovered.

And while being attacked by a shark is ever a possibility when you venture into the ocean, as a bit of perspective, over the past 30 years, at least three people have fallen to their deaths off Morro Rock, which is illegal to climb.