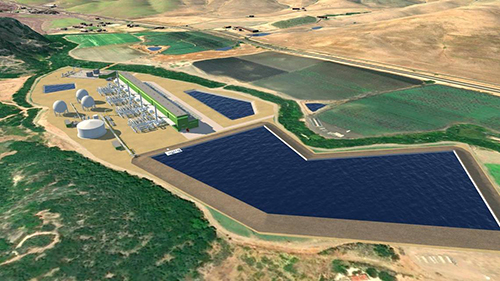 Review of a proposal to build an energy storage facility in Chorro Valley is now officially underway, after the California Energy Commission “docketed” the so-called “Pecho Energy Storage Center” for review and permitting.

The project site is on farmland located at 2284 Adobe Rd., a little over a mile outside Morro Bay and off Hwy 1 at Canet Roads. The property sits at the base of Hollister Peak with Chorro Creek passing nearby.

The Pecho plant, “would compress air into a purpose-built underground cavern,” reads a project description on the Hydrostor project website, “using electricity from the grid, most likely off-peak, excess, or surplus electricity. The heat from the air compression process would be captured and stored in an aboveground thermal storage system.

Oddly enough, every energy project now being proposed — offshore wind farms and the Battery Energy Storage System (BESS) a battery storage facility at the power plant and Pecho — are banking on that same switchyard for a connection to the grid.

In recent weeks, the company has been doing some test drilling at the site, which apparently isn’t yet know if it is suitable for the project. Neighbors of the site have expressed concerns in recent news articles.

According to the CEC, Pecho “would provide fossil fuel-free and greenhouse gas emissions-free electricity,” a claim that would obviously be dependent on where the initial electricity is generated for storage.

The CEC is just beginning its review, which according to the agency supersede all local permitting and review, satisfying the State’s environmental law — California Environmental Quality Act or CEQA. So while the location is in the County’s permitting jurisdiction, the County will have no authority over the project review, outside being a commenting agency.

Another agency that has already submitted comments on the project is the Morro Bay National Estuary Program or NEP. Executive Director, Melodie Grubbs, in a letter to the CEC said, “The MBNEP is concerned that certain topics within the Pecho Project AFC application appear to be too narrowly focused on the site and its nearby surroundings and don’t fully consider the project’s location within the context of the Morro Bay estuary and watershed. These topics specifically include the biology, water, and land use sections.”

She points out that Chorro Creek, along with tributaries San Bernardo and San Luisito Creeks are the major freshwater source for the Morro Bay National Estuary and, “have been the focus of water quality and habitat improvement efforts for decades.”

That preserve encompassed the former Hollister Ranch and spans both sides of the highway and San Luisito Creek. NEP helped broker the deal that purchased the property and it was gifted into Fish & Wildlife’s care.

That project in Chorro Flats (previously known as the Domenghini Flats) mainly concerned a levee that farmer’s erected decades before to straighten the creek, drain the area and turn it into farmland. The RCD’s project removed the levee and dug a new channel for the creek that meandered into the flats, planted it with willow cuttings, and returned it to a natural habitat, but kept some of the land for agriculture.

It was designed to slow the creek flow down and have it spill over and flood into the flats, as it did before all the changes were done. The idea was to have sediments settle in the flats and not in the estuary, which the NEP has identified as the No. 1 concern for the estuary’s health and lifespan.

“The proposed Pecho Energy Project between these two preserves along Chorro Creek and any additional development should consider impacts to species movement and impacts to water use and water quality,” Grubbs said.

“In addition to protecting habitat for these and other special status species, it will also be important to have an adequate buffer adjacent to Chorro Creek and tributaries [e.g., San Bernardo Creek] to support wildlife migration along the creek corridors and access to nearby upland habitats.

A lot of money and effort has gone into acquiring and conserving lands in Chorro Valley. “Large amounts of money, mostly public, have been expended to acquire stretches of Chorro Creek and its adjacent lands,” Grubbs said, “to protect and restore habitat in and along the creek itself, but also and importantly, to restore the floodplain to more natural functions, with the aim of improved sediment capture and reducing sedimentation in the estuary into which the creek drains.”

The CEC has begun docketing the project’s studies and reports. If readers want to keep tabs on the project, they can have their email addresses added to the project’s server list. See the project website at: www.energy.ca.gov/powerplant/caes/pecho-energy-storage-center and follow the instructions to sign up.