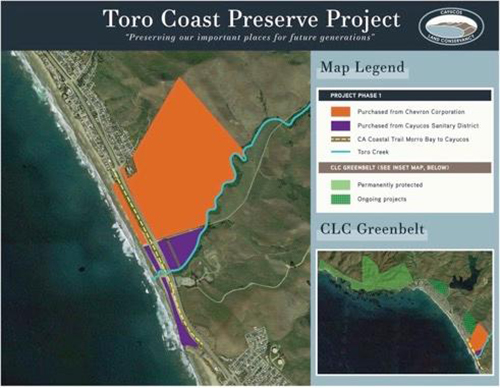 When was the last time you drove north on Highway One? Did you notice the Pacific Ocean on your left, maybe a few cars parked at pull-outs, a couple of hikers, maybe a family — folks like you and me, who stopped long enough to make their way towards an overlook cliff to see crashing waves and feel the salty spray? Traveling farther, were your eyes pulled right to notice cattle grazing on miles and miles of hilly grasslands only interrupted by a few village structures, of course, called Harmony?

Have you ever wondered why these pristine open spaces were not packed with hotels and homes? Why isn’t our north coastline drive between Morro Bay, Cayucos, Cambria and San Simeon filled with homes and visitor-friendly shops and restaurants like our south coastal neighbors? Blame them or bless them, you’d be wrong to assume it was the California Coastal Commission or a federal government agency that said no to development — at least for now.

Did I hear a “thank you very much” realizing you were experiencing the same drive or ride or hike our grandparents, settlers, or our Native Americans once saw?

Truth be told, over the years this land has been discovered, claimed, acquired, retained, owned, appropriated etc. etc. etc. I don’t have time or knowledge to detail our coastal history. Suffice it to know that in March 2022, this open space property belongs to us – we the people – to forevermore look at, cherish and care for, tread over, study, allow grazing and enjoy gasping at wildlife darting and feeding. But how and why are we so blessed?

Well, according to the Cayucos Land Conservancy website (CLC) “…in 1979 something big happened…” when a “powerful group from southern California” bought 275 acres of “…pristine marine terrace…” north of Cayucos. These landowners were able to re-zone the land and get approval from the California Coastal Commission to develop a gated community of 60-homes, a hotel for upwards to 250 guests, plus shops and restaurants. Today we know that acreage as Estero Bay Bluff State Park because some Cayucans were paying attention and refused to accept this plan.

Recently Greg Bettencourt, a founding member and current president of CLC, explained to Morro Bay Rotarians the catalyst behind the creation of the group’s initial land trust and conservancy. Essentially, our forever coastal view was preserved into perpetuity because enough Cayucans said the Estero Bay Bluff proposal did not fit the character of a north coast they envisioned.

“It wasn’t the homes,” Bettencourt said. “What riled up the neighborhood was their ‘gated’ intent.” These emboldened outliers were not going to get away with a financially lucrative take-away of public access on this stretch of California’s coastline.

Check out www.cayucoslandconservancy.org for more details about this “David and Goliath” triumph. Basically, Cayucan Susan Lyon smelled something funny going on while monitoring the Cayucos Citizens Advisory Council. CCAC is a group elected by their peers to watch over happenings within, or near, their tiny community. She asked her lawyer-husband, Roger, if the developers could be stopped. “Yes,” he said, “but I don’t think the town knows that.”

Susan ran for a seat on the CCAC, then invited ten couples for dinner and recruited them to get the word out to the townspeople that Cayucos was about to change forever.

The developers needed CCAC to recommend their plan so SLO County supervisors would approve water rights on their acquired property. When they officially presented their plan to CCAC, 500 people showed up. Some got rowdy. Battle lines were drawn, and ten years later the property was down zoned to agriculture land by the county. Ultimately, without approval for their plan, the developers decided to sell. However, the formation story about CLC doesn’t end here. Click onto CLC’s website for further details.

Some of you might cry, “Foul play! Land-owners should be able to build on their land.”  Indeed, but when a proposal is at odds with the majority of the neighbors, there is another option that might (not always) satisfy the landowner, appease the public, and entrust an agreed upon supervising agency to maintain the forever use of the property in question. In the case of Estero Bay Bluff State Park, the Trust for Public Lands offered 7 million dollars to compensate the developers and purchase an adjacent parcel. The founders of CLC realized there was still work to do to preserve and conserve the property, so they established the organization that continues today.

“Conservation is complicated,” said Bettencourt. “A conservancy/land trust is not a government agency or an advocacy organization. Our group’s original goal was to create a green belt around Cayucos or at least a Hwy 1 separator north and south of us. What we (CLC) do is conserve marketable land by finding willing landowners who will accept fair market value for the land we decide we want to buy for an amount we can afford to pay.”

Today Estero Bay Bluffs State Park is managed by California State Parks with continued cooperative efforts with CLC to promote access for the public’s enjoyment or education about the area. Additional acquisitions by CLC have been San Geronimo Ranch, parcels on Cayucos Hillside Lots, aka Hang Glider Hill, and recently the Chevron property between Cayucos and Morro Bay. CLC, the City of Morro Bay, and Chevron agreed the property should be preserved to develop the Coastal Trails Connectors, maintain the only off leash dog beach in the county, and offer a Pacific Ocean view corridor on Hwy 1 for traveling visitors and residents.

And what do you, we the people get out of such conservation efforts besides the pristine view we enjoy as we drive from Estero Bay to San Simeon. CLC continues to create and promote regular public-serving happenings, docent led tours at Estero Bay Bluff State Park, for example. Coming up in March is an onsite program by biologist and birding icon Tom Edell, who will introduce participants to the many birds that frequent SLO County.  Also listed on the website is Dr. Joel Germond, a nature lover who has been studying and photographing biodiversity along California’s central coast since 2007, will lead a group hike called “Stalking the Wildlife of Hollywood Hill” – another name for Hang Glider Hill.

You don’t have to be a Cayucan to hang out with CLC board members and friends. To join in and get on their mailing list offer up $25 or more at www.cayucoslandconservancy.org. It’s truly a family with a single purpose — protect the essence of what makes the Central Coast coastal. And when you meet up with Greg Bettencourt shake his hand and say “thank you” for all those determined Cayucans. He was one of them, a lifelong Cayucan along with his parents, his wife Mary, their two sons and grandkids, who all love, live, and play in Cayucos.