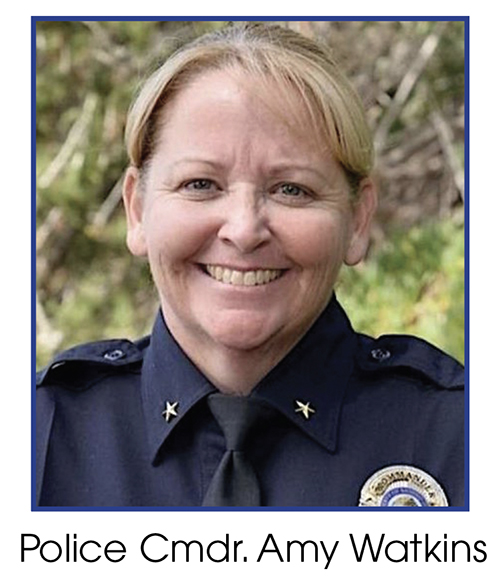 On Dec. 16, Morro Bay City Manager Scott Collins announced that he was naming Police Cmdr. Amy Watkins to be the interim chief of police, while the search is on to replace retired-Chief Jody Cox, whose last day with the City was Dec. 31.

“I conducted surveys of the Morro Bay Police team and the community,” Collins said, “and there was resounding support for the current direction of the Police Department. Further, many respondents stated their desire for the City to look internally for the next Chief. Amy has prepared herself for this role and I look forward to working closely with her.”

Retired Chief Cox supported Collins’ decision. “I wholeheartedly support this decision,” he said in a statement, “and believe that not only is the Department in a good place now, but it will continue to move forward building upon all the positive work we have accomplished over the past few years.

“I am extremely proud to have been a part of building our current team and each one of you have made significant contributions toward our success. I have absolute faith and confidence that the Department will continue to build upon our accomplishments working alongside Commander Watkins as the Interim Chief.”

IPC Watkins was honored to get the opportunity. “It is an honor serving the community of Morro Bay,” she said. “I am excited for this opportunity to continue to lead the dedicated men and women of the Morro Bay Police Department.”

IPC Watkins came to Morro Bay in August 2019 from the Visalia P.D., where she’d worked since 2000. She graduated from the police academy in 2019. With the appointment, IPC Watkins would appear to be the frontrunner in the search for a new full-time police chief, though it’s unknown at this time how many applications Collins has received. So it could be that a new chief will be chosen from outside the community.

If IPC Watkins does get the full time job, she will be just the second female police chief in town history, after former Chief Amy Christy.

IPC Watkins, according to a news release, has worked with Chief Cox leading the department through an expansion of community programs including launching a Citizen’s Academy, the Police Chief’s Advisory Board, and mobile phone app, among others.

Since coming to Morro Bay, she has helped train new police officers and sergeants and served on the City emergency team “to help aide the City and community throughout the COVID-19 Pandemic,” Collins’ news release said. “Prior to coming to Morro Bay, Amy accumulated 20-years of law enforcement experience with the Visalia Police Department.”

And just before Christmas, Collins named Chief Harbor Patrol Officer, Becka Kelly, as interim harbor director, to fill in for the retired director, Eric Endersby, who also left the City at the end of December.

However, her interim tenure will last about a month, after the city manager announced Jan. 5 that he’d hired Ted Schiafone of Oceanside Harbor to fill the full-time role starting Feb. 13. (See story on page 2)

“I’m delighted,” Collins said, “that Becka is taking on this interim assignment as we continue the recruitment process for the next Harbor Director. I am confident that Becka Kelly will provide excellent leadership during this transition period.”

Kelly was hired as a harbor patrol officer in 2006, Collins said. And in 2010, she was named Harbor Patrol chief replacing Endersby, who got the director’s job upon the retirement of Rick Algert.

“I am honored to carry the torch during this transition at the Harbor. Eric has left some big shoes to fill, but with one step at a time we will continue to provide our best service to the waterfront and boating community.”

Endersby is planning on going to work for Cuesta College, running a new airplane mechanics program out of the County Airport, returning to work he did before hiring on with the Harbor Department.

Kelly said she was honored to step up to the interim director’s position. “I am honored to carry the torch during this transition at the Harbor,” she said in a statement. “Eric has left some big shoes to fill, but with one step at a time we will continue to provide our best service to the waterfront and boating community.”

She’s filling her own pair of big shoes as well, as during this time she is holding down three jobs — harbor patrol officer, harbor patrol supervisor and interim harbor director.

According to the news release, Kelly earned a Bachelor’s Degree in biology from the University of California Santa Cruz. She is an Executive Committee Member for the Morro Bay National Estuary Program; a board member for the Central Coast Women for Fisheries, which advocates for the commercial fishing industry; and a coach for the Morro Bay High School Surf Team.

← Previous: With Castle Wind Out, Where Does That Leave Morro Bay? Moving Forward: The 2023 Morro Bay Bird Festival →