With Castle Wind Out, Where Does That Leave Morro Bay? 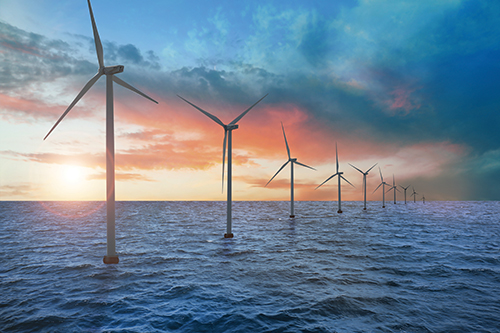 For nearly a decade, the City of Morro Bay has been working with potential wind farm company Castle Wind in anticipation of a big lease sale by the federal government for offshore floating wind energy development.

But in December, Castle Wind finished out of the money in the bidding for three huge offshore areas, located in a nearly 400-square mile area some 20-30 miles off the coast at San Simeon.

The City had some preliminary discussions with some of the three local lease holders but had gone much further with Castle Wind, so far as to sign an agreement with the company to work together and support Castle’s bid for a lease.

It was essentially one of the Bureau of Ocean Energy Management (BOEM) requirements of the companies — to work with local cities and counties and so-called stakeholder groups. Those were listed as such entities as local Native American tribes and commercial fishermen.

Now with Castle’s failure to win a lease, any agreements the city and stakeholders had has dissipated in the wind.

“With regard to Castle Wind,” Morro Bay City Manager Scott Collins told Estero Bay News, “that Castle Wind and City agreement was predicated upon Castle Wind obtaining a BOEM lease. So with them not obtaining as lease it is no longer operative.”

Collins said the City has spoken with some of the other over a dozen bidders, more of a feeling-out than anything concrete.

“Several of the firms that won bids,” Collins said, “have spoken with the City in the past [prior to the auction] to understand our goals regarding wind, as well as the potential impacts and potential benefits related to the industry potentially coming to the Central Coast.”

The City pointed them towards the fishermen. “In conversations with these firms and other firms,” Collins said, “we have encouraged them to talk with the local commercial fishing organizations as that industry is important to Morro Bay and will be the most impacted by offshore wind. We also encouraged them to engage with our community as Castle Wind has done in the past.”

Time to Engage the Community

With the lease sale finally over (it took over 2 years to hold the auction) and the companies chosen who will now be able to put together actual projects, the City anticipates they will come calling sometime soon.

Community engagement is one of the ways that BOEM has set out for the companies to earn credits off their winning bids, potentially saving them tens of millions. Plus the City needs to know what facilities the companies will need — for boat moorings, potential office space, communications, and maintenance — inside the harbor.

Indeed, the City got a $1.5 million grant from the Federal Government to pay for upgrades and repairs of the North T-pier, and in anticipation of addressing the needs of the offshore wind companies.

“I anticipate that the City will be talking with these firms in the near future,” Collins said, “to engage in similar conversations.”

The wild card in all this is of course the newly elected city council members as the City swore in a new Mayor, Carla Wixom, and two new Councilwomen, Cyndee Edwards and Zara Landrum, none of whom spoke very enthusiastically about the wind farms coming here or about a proposed battery energy storage system for the power plant property during the campaign.

After the lease sale, EBN asked the new Mayor how she felt about Castle Wind falling short and where it leaves the City.

“A lot of wait and see,” Mayor Wixom said. “I am hopeful there will be financial opportunities to benefit our Harbor needs.”

Those needs were addressed in the November 2022 Election with Measure B-22, a parcel tax of $120 a year on all privately owned properties in town. But B-22, the “Morro Bay Harbor Infrastructure Act,” which would have raised about $680,000 a year fell well short of being approved, garnering just 36% of the vote to 64% voting “No.”

The City Council also had a 2-person subcommittee but former Mayor John Headding and Councilwoman Dawn Addis (now State Assemblywoman Addis), are both gone, so a new subcommittee is slated to be appointed.

“The Offshore Wind Council Sub-committee,” Collins said, “will be set by City Council at the Jan. 10, 2023 Council meeting.

“An outfall lease with offshore wind company (or companies) could be in the cards for the City, and Council would determine how those potential funds would be allocated.

“In the past,” Collins continued, “when the power plant was operational, the outfall lease revenues helped support the Harbor Fund. In addition, there is the potential for small operation and maintenance facilities and operations to be developed in the Harbor to support offshore wind.”

There’s an upcoming Council goal-setting session, usually in February, that could be very important for the offshore floating wind farms’ future or at least how the City Council will handle negotiations.

“Council will likely take up the broader issue of offshore wind during the City goal setting process early in 2023,” Collins said.

Show Us the Money

That outfall canal lease — where the power plant’s heated cooling water was discharged into Estero Bay — is a key to whether or not or better perhaps, how much the City will cash in with the offshore wind farms.

It was originally between by Pacific Gas & Electric and the County. Enacted back when the power plant was built in the early 1950s, it didn’t pay the City anything for the lease. In the early 2000s, that lease was renewed by Duke Energy with the City this time after Duke bought the power plant from PG&E; part of the State’s flirtation with deregulation of the energy industry.

Duke agreed to pay City Hall a minimum of $2 million a year — including $250,000 a year to the Harbor Department in lease payments — if and when Duke’s power plant replacement project was completed.

But that never happened and Duke abandoned the project and sold all of its California power plants. The power plant has been on a downward spiral ever since and was shutdown entirely in 2014 by then owner Dynegy, which is now a part of Vistra Energy.

The outfall canal has silted completely in and the power plant now sits as an abandoned relic of the town’s industrial past, but it could also hold the keys to its future.