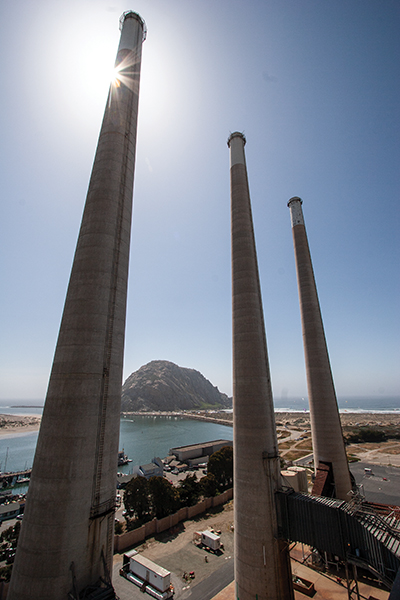 Morro Bay residents are being invited to attend a public meeting to discuss writing a master plan for the Morro Bay Power Plant property.

According to the published agenda, at 6 p.m. they will have an overview of the issues and “visioning activity.”

From 7:30-8 they will talk about design and scale issues; and the meeting will wrap up at about 8.

As has been the case in the past, the power plant has again come into focus for the City, which is in the process of reviewing an application for a 22-acre, 600-megawatt Battery Energy Storage System (BESS) facility on the plant property, a project estimated to cost $490 million.

That permit application is in the environmental impact review stage and promises to be a huge issue once the EIR is done and it becomes a public debate, including for the November City Council elections.

Vistra, the plant owner, has also signed an agreement with the City to tear down the powerhouse building and the smoke stacks by 2028 or pay the City $3 million. That roughly 9-acre site on the 117-acre larger property, is deed restricted to only allow industrial uses.

The State agency that oversees the site recently closed its investigation of possible contamination of the site, which closed operations in 2014. The Department of Toxic Substances Control (DTSC) concluded that most of the site is free of contamination but two sites showed low levels of contamination in the soil and groundwater. That’s the same site, a former fuel storage tank farm, where the BESS is being planned.

DTSC’s final report also declared that it does not know if there is contamination of any kind underneath the powerhouse and stacks, and can’t know until they are removed.

This new master planning would be at least the second such exercise for the plant property, though the original one was done by a volunteer citizens group and carried no legal weight. But the City writing an official master plan for the property would be more binding.

Com.-Dev. Director Graham told Estero Bay News that the master plan is called for in the City’s new General Plan that was just recently approved by the Coastal Commission and is needed in order to be able to redevelop the property at some future time.

Of course the elephant in the room is Vistra’s BESS proposal and this master planning effort will focus on that first.

The “Master Plan will be phased,” Graham said. “Phase 1 will deal with the battery project and land use/zoning change from visitor serving commercial to light industrial. It will also look at other uses for the remainder of the site and what if any constraints the BESS would have on the other uses — basically, it’s a constraints analysis.”

The overall power plant property extends beyond the fenced plant site, to include Lila Keiser Park and Fishermen’s Gear Storage yard next to Morro Creek.

“Those are owned by the power plant and leased by the City,” Graham said. “People could weigh in on those properties at the workshop, but the primary purpose of the workshop is to look at the battery project and remainder of the main site.”

What of Vistra’s agreement with the City to tear the plant down or pay up? Graham said they anticipate the plant is coming down. “The assumption is the stacks and main power building will be demolished,” he said. “Phase II of the master plan will come later when development is proposed for the remainder of the property.”

As for PG&E’s deed restriction, that doesn’t worry the City. “That will be part of it,” Graham said, “but the deed restriction could be removed, so I think everything is on the table.”

The master plan apparently isn’t being done as a lead-in to the offshore wind farms, which will need a lot of room for a maintenance facility. The City just got a $1.5 million federal grant to address maintenance and upgrades to the North T-pier, which the Harbor Director told EBN was at least in part meant to ready the pier for large work boats servicing the 3- gigawatt wind farm proposed for off the Coast of San Simeon.

“The intake building,” Graham said, “could be something that could be used for O&M of a floating wind farm project.”

And who is footing the bill for this planning effort? “Vistra is paying for it through a reimbursement agreement,” Graham said, “but it is led by the City. We have contracted with Rincon Consulting to do the master plan. Rincon is also preparing the EIR for the BESS project.”

The meeting is being held in person and being taped by AGP Video for broadcast on Charter Cable Ch. 20, the City’s government access channel. It would also be available on slo-span.org. Graham said he wasn’t sure it would be broadcast live, but would certainly be shown in re-runs.