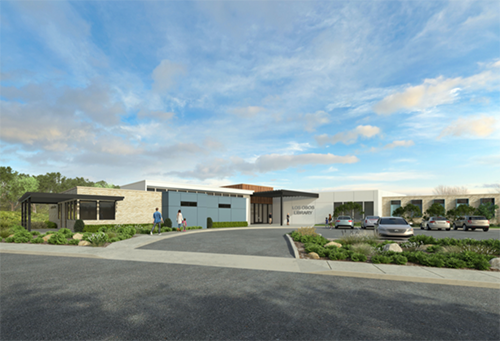 It has been a long time coming, but members of the community got a look at conceptual plans for the retrofit and expansion of the Los Osos Library. It is the first public meeting on the project since it was tabled during the pandemic shutdown in 2020.

“We’re super excited about the potential of this library in your community for being the cornerstone for what’s next,” County Director of Libraries Christopher Barnickel told attendees who were in-person or via Zoom.

As presented, the design is a 6000 s.f. LEED certified, one-story open floor plan with a site path that allows users to discover outdoor spaces, that has a variety of unique private seating (nooks) as well as group and indoor and outdoor areas for children to discover.

The proposed materials include natural wood siding, stone, brick and a boardwalk path. The parking lot would remain where it is.

Renderings and design information displayed at the meeting are not a done deal, but provide a strong base to work from.

“This is just capturing the feedback that we got from community considerations and our operational considerations that we learned from other branches as well as this one,” Barnickel said. “Nothing is set in stone at this point in time.”

During the meeting, folks questioned if the new facility would allow for an increased collection size.

“We did add more shelving for collections,” Barnickel told Estero Bay News. “It isn’t necessarily tied only to print materials. With different sizes/shapes of books it is difficult to quantify exactly how many more books (materials) can be housed in the new location. The space will be more usable, functional, and reflective of the growing needs of that community.”

While ideas such as a suggested area to get coffee and perhaps a bite to eat within the library as well as patio interior and exterior access and the capacity of meeting rooms are ironed out there are also financial aspects to deal with.

Funding for the nearly $5 million dollar project looks to come from multiple sources including money raised over time by the Friends of the Los Osos Library as well as grants and state and/or federal funds. Another idea is to place a bond measure on the ballet in in 2024.

“I would say it is likely that there is going to need to be a community contribution to getting this library,” District 2 Supervisor Bruce said.

“The county does not have funds sitting in the bank that are magically going to be mobilized to Los Osos. At the same time, I see a real opportunity. I think the pandemic has shown us the value of some of these community facilities and, in particular, the loss of a library was a big deal for a lot of people.

“I think, at a very modest assessment on everybody we can get something to benefit everybody.”

In the past the county has matched funds raised by a library’s associated Friends of group such as with the facilities in Cambria and Atascadero. Gibson said that may no longer be something to count on.

“Morro Bay wanted their library renovated, and the math wasn’t there. They did it pretty much on their own with very little county funds. That’s the evolution of this. I wish we had the ability to write the check.”

Next month, plans will be presented to county public works as part of the capital improvements process.

“Maybe there’s a private public partnership that we haven’t thought about,” Barnickel said noting he didn’t know of a library in the county that was funded that way. “Certainly other cities, other communities have done that. I think there are ways in which we can do this, [but] I don’t have an answer for you today as to what that is.”

Readers can see all the conceptual photos on display at the Los Osos Library.

The Library, 2075 Palisades Ave., was built in 1981 and was designed to serve a population of 10,000. In 1999, the Friends of the Los Osos Library and the County of San Luis Obispo began planning for a new facility on the existing site.

Other libraries within the system that Barnickel said need major work are Templeton, Arroyo Grande and Oceano.