Sad Ending for the Lady Maxine 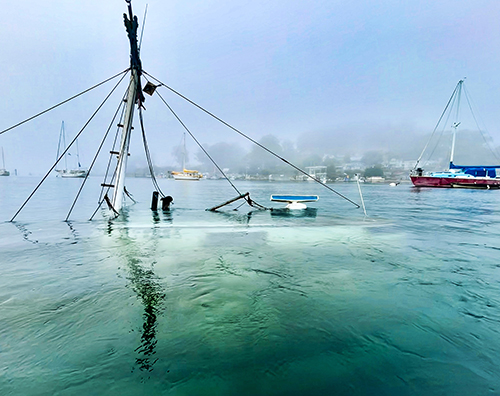 Above, the sinking of Lady Maxine. Photo by Paul Irving

She once plied the sea chasing fish over the bounding main, but now she sits in Davey Jones’ Locker at the bottom of the bay awaiting the day she gets raised, crushed into splinters, and hauled to the landfill.

The commercial fishing vessel, Lady Maxine, sank in late July while tied to an offshore mooring south of the public boat launch, her mast sticking high above the water and the wheelhouse and hull visible through the blue water just below the surface.

The Harbor Department called Jim Sanders of California Marine & Salvage, who had a go at raising the boat but she wouldn’t come loose of the bay bottom muck. “Our original divers,” explained Harbor Director Eric Endersby, “reached the limit of their capacity, unfortunately, but they did do some good prep work by removing some really heavy stuff aboard and cutting off the outrigger poles.”

The Lady Maxine’s deteriorating condition was well-known to the department, as the Coast Guard had long ago removed all the fuel and oil and other potential pollutants from the boat. So while the sunken ship sits on the bottom, she doesn’t need to have an containment boom encircle it.

Endersby said they’ve contacted the Sheriff to see if they’d assist. “We have requested the Sheriff’s Dive Team to raise the boat and they have agreed,” he said, “part in training and part in agency collaboration, so what you are hearing is correct. We are just waiting on them to muster the necessary members on a date that works for them, as they are generally a volunteer group.”

The plan is to raise the Lady Maxine and tow her to the launch ramp, where she would be dragged up on land and demolished with an excavator, then loaded into roll off dumpsters and hauled to the landfill, a process that has marked the end for several fishing vessels.

Meanwhile, the shipwreck is a curiosity for kayakers, day sailors and paddle boarders who glide past and check her out. So why wouldn’t she come off the bottom?

“She won’t float because there is more water on the inside than on the outside. Yes, you can quote me on that,” said an apparently frustrated Endersby.

It was the second old fishing boat to sink in the harbor in 2 months.

The other boat, which Endersby said they didn’t have a name for but called it “Big Traveler,” had sunk while tied up at the harbor docks at the North T-pier. The steel-hulled boat “tried to sink last year” but a diver patched a hole in the hull and she was re-floated and moved from a mooring to the docks. The Harbor Patrol helped the owner in “removing all the gear and junk hoarded on it the past 25 years,” he said. They got it cleaned up and were given a permit by the EPA to sink it.

He said, “Maritime Logistics [the two, big, black, white and red boats at the South T-pier] just towed it 50 miles out last Sunday [Aug. 15] to get rid of it on their way to another job in SoCal.”

The Harbor Department deals with such derelict boats sinking at least a couple of times a year. Each time there’s the danger of pollution escaping the boats, which could have gasoline or diesel fuel in the tanks, hydraulic and motor oils and even such hazardous materials as paints, solvents and even sewage.

← Previous: Conceptual Plans for Osos Library Revealed This is How We Celebrate Birthdays in Baywood →