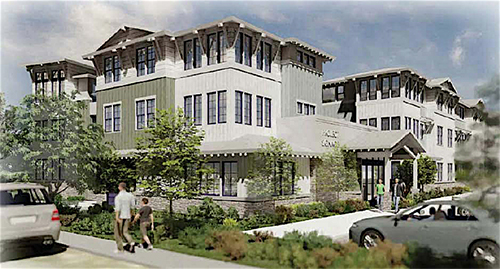 Artist rendering is of the Morro Bay Family Apartments, a 35-unit affordable housing project to be built on a vacant lot at 405 Atascadero Rd., in Morro Bay by the San Luis Obispo
Non-Profit Housing Corporation.

The Morro Bay City Council on Nov. 12 continued its support of a proposed affordable housing project on Atascadero Road, granting its entire 2021 Community Block Grant award, plus a spill over from last year to the single applicant.

The City is expected to this year get $59,800 from the County, which administers the federal CDBG program. The County takes $$7,782 for administrative costs, leaving $52,076 in the current funding available to the City.
Add in another $41,880 rolled over from the previous cycle and the City had $89,766 and program administration of $4,190 for a total funding allocation of $93,956.

And that all went to San Luis Obispo Non-Profit Housing Corporation’s “Morro Bay Family Apartments” project at 405 Atascadero Rd., a 35-unit apartment complex with a mix of one, two and three bedrooms units affordably priced for working families and individuals.

The Morro Bay project is on a vacant, .94-acre site at the corner of Atascadero Road and Sunset Avenue. The project will have a community room with a full kitchen. The buildings are two and three story and have a mix of 17, 1-bedroom units, nine 2-bedroom units and nine 3-bedroom units.
Also planned are a laundry room and a large, common, open area with a playground, and a picnicking area with outdoor grills, benches, tables and more.

That project has already been granted permits and is well along in the development process. It should be noted that the Housing Corp had asked for $250,000.
Senior Planner Cindy Jacinth’s staff report said that project, “is consistent with previously established City goals to support affordable housing.”

It’s also not the first time the City Council has thrown money at the project. Back in June, it loaned the project $150,000 out of the City’s housing in-lieu fund, a fee paid by developers instead of building required affordable units with a larger project.

And the Council also deferred some $350,000 in permit fees also in the form of a loan. But the $500,000 in loans doesn’t have to be repaid for 55 years, until the affordable housing deed restrictions on the project are expired. Until then, no payments will be made on the loans, which carry a 3% interest rate once repayment begins.

The final amount of the City’s CDBG award is actually unknown, and won’t be final until a Federal budget is approved. The city manager will adjust the amounts as needed.

The CDBG program comes through the Department of Housing and Urban Development and is allocated based on population, so Morro Bay always gets the minimum amount available.

It can be used for various things, housing, infrastructure and more depending on the needs and what projects apply for funding.
The City received four applications. One was from People’s Self Help Housing for $8,637 for its “Supportive Housing Program,” which provides clinical services and case management to residents of PSHH’s other affordable units around SLO County, but specifically four in Morro Bay, at 2612 Elm St, 495 Main St., 456 Elena St, and 375 Sequoia St.
These complexes are for low-income families (Section-8) and seniors. PSHH actually asked for $69,900 from the whole county with the Morro Bay portion at $8,637.

Another unfunded request was made by the Salvation Army for $300,000 for a project they want to do somewhere in the county to raise $600,000 to provide four units of “supportive housing for homeless persons who need long-term support to prevent a return to homelessness,” reads Jacinth’s report.
That seemingly noble goal wasn’t far enough along in the development process to warrant any of Morro Bay’s award at this time, so it was not funded.

The County will now collect the recommendations by the various city councils in SLO County and put it all together into one big funding request.

The Housing Corporation also requested funding from a couple of other County programs — The application also includes a request to the County for HOME and Title 29 funding, along with CDBG monies and totaling $1 million in requested funding.

Rendler focuses on public-private partnerships and has been involved with affordable housing projects on the West Coast since 2006.

A CHDO’s mission “is to serve the local community by acquiring, developing, rehabilitating, owning, and managing affordable housing throughout the County of San Luis Obispo.”

SLONP is the managing general partner and will own on the project. Since 1990, SLONP has built over 700 affordable apartments, many in collaboration with community partners.

“The mission of HASLO is to provide affordable housing throughout San Luis Obispo County,” the organization’s website said. “As the local Housing Authority, we are stewards of certain resources that are able to uniquely serve the poorest of the poor. HASLO plans to commit ‘Project Based Section 8’ vouchers to this project, and will provide other long term financing to the project. HASLO will provide housing management, and income certifications to ensure regulatory compliance.”
Of the 35 units in Morro Bay, 26 are to be for “very low income” people and eight for “low income” folks. Using housing vouchers will help the tenants make rent payments and keep the apartments at affordable rates, according to HASLO.

They are proposing 20 apartments in Pismo Beach; and two other projects in SLO — a 10-apartment mixed-use project on Broad Street; and a project on the site of the old Maxine Lewis Homeless Shelter on Orcutt Road with 35 units.

They also have rehab projects at 14 other sites totaling some $25 million, with “Many other sites also in progress.”