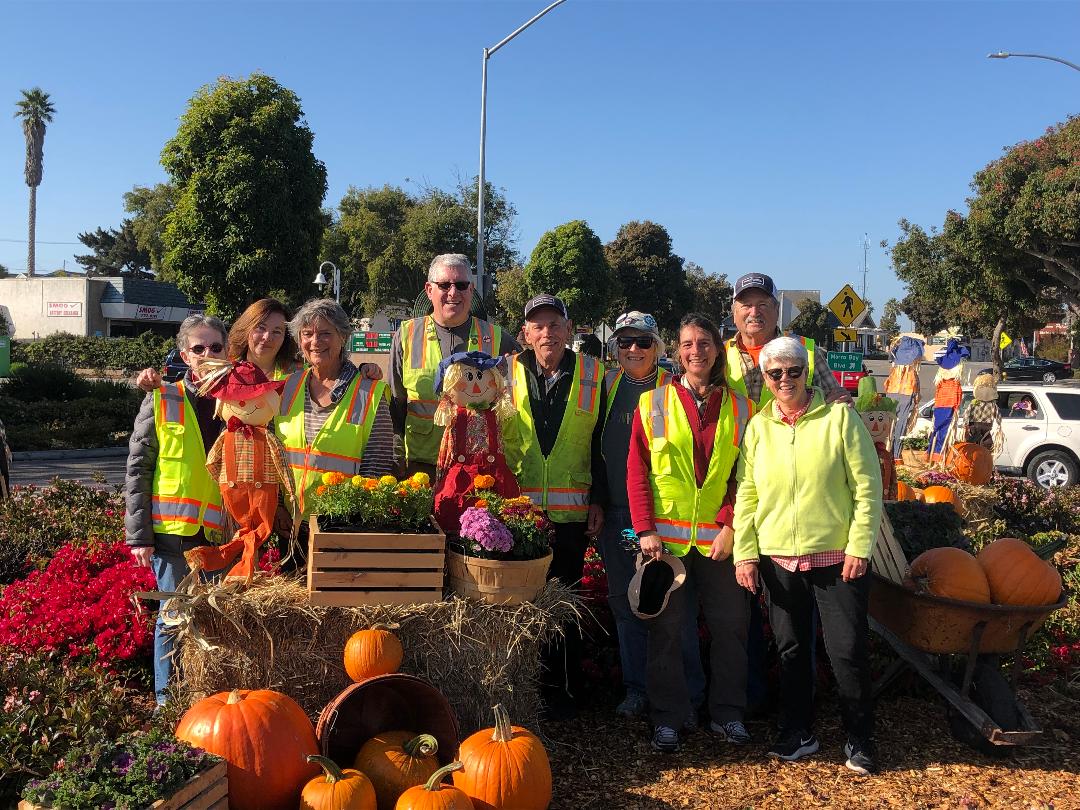 Morro Bay In Bloom recently celebrated its 7th Anniversary – virtually. Members have traditionally assembled at the home of Walter and Jane Heath, for their founder, project designer and nonprofit manager to thank his fellow gardeners for showing up whenever they could on a Saturday for two hours with one purpose in mind, plucking weeds and planting seasonal flowers for bursts of reds, oranges, yellows, pinks, blues, and purples to “green” our city’s urban landscape.

This columnist’s fuzzy math skills indicate that since MBIB was established October 25, 2013, members have dedicated approximately 364 Saturdays – 728 hours each of personal weekend time to join fourteen member gardeners who collectively have generated about 8,736 hours to deliberately get their hands dirty. Indeed, MBIB is making a beautiful difference.

“When I say (urban) beautification,” said Heath, “I feel it a bit arrogant because we already live in such a beautiful place. I believe what MBIB does is provide a beautiful frame the for beauty already here.”

During their celebration he and members reminisced: Heath recalled, “It still amazes me each week when someone in the group says, ‘We’ll never do this in 2 hours.’ After seven years I’ve gotten pretty good at planning what we can accomplish in 2 hours. The group gets to the site and I always hear ‘No way will we get this done’ and after 2 hours of catching up while we work someone will inevitably say ‘OMG, we did it.’ It makes me smile every time.”

Carrie Filler said, “I always have fun. The Roundabout makes the big splash. That’s what is noticed. This year’s fall display looks so good.”

“We had to get crab grass out of the bike park to plant agave and lantana. It was the toughest assignment I worked on,” said Ed Bois. “It was grueling work, but satisfying.”

Jane Heath recalls their first American In Bloom conference when Morro Bay won its category. “First we watched all the competitors’ videos. They were amazing and I leaned over to Walter to whisper there was no way we would win, but little ‘ole Morro Bay won.”

Walter added Jane was particularly grateful to member and newly elected Morro Bay City Councilwoman Laurel Barton, for negotiating a starter plant program with Cal Poly. Jane’s been waiting at least seven years for her husband to finally design and plant their own patio garden.

Jan Goldman, an original Bloomie, loved the day “…a man from DC showed up at the Welcome Center and asked if there was a rule in Morro Bay that everyone in the city had to maintain their garden. He thought we looked manicured and pretty.”
One Saturday John O’Brien realized it was okay not to be perfect when he was told his lantana plantings were three centimeters off.

Eileen Sweeney said, “I love driving around the city and seeing the difference so few people have made to make a special difference in how our city looks.”

Although the kudos were generously directed towards the member volunteers, it must be noted a strong, sustained organization thrives best when led by a passionate and dedicated chairman. Heath was raised in San Francisco loving his time gardening. Both sets of grandparents gardened – one greenhouse gardening while the other preferred truck farming edibles.

Once he retired from a career as a chemical engineer/protein scientist specializing in enzymes and living in Morro Bay, he took on his advocacy for gardening as if it were a full time career. When asked why, he said, “MBIB makes me happy. It draws from all my skill-sets. It combines my passions to build community and plant gardens. I love building community but most of the time I was working in the political arena and there you always have a winner and loser and then move on to the next election cycle. This is not satisfying to me. MBIB builds community with long lasting effects that are satisfying.”

Heath explained why urban planting is important. Himself an America In Bloom board member, he joined a group of professional and community urban planners to provide research and visitations to share their expertise with communities worldwide.  AIB’s research discovered, “…a beautifully landscaped community will see less crime and graffiti.” Heath added, “Each week our members will hear the color we add to the planter boxes and landscape areas brighten up our area. People will say, ‘I get so tired of the fog and the colors brighten my mood.’ The contrast of browns and grays with color elevates any mood.”

← Previous: Council Grants Support to Affordable Apartment Project A Call to Save Christmas →