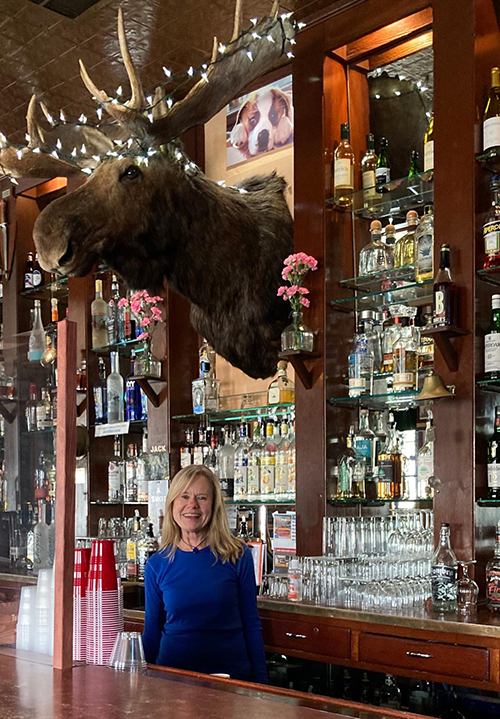 Warning! Moose sighting inside the watering hole at Main & Harbor Streets, Morro Bay, CA! No worry – it’s only Bull-Twinkle. Authorities have restricted his on-guard duties at Legends, the historically themed bar, for at least seventeen years.

The five star post on Yelp by Los Angeles visitor Robby D., included, “Awesome looking bar with a giant moose over the center of it! I’ve seen a lot of moose heads in my day and this was by far the biggest!”

Owner Casey Kelso rescued her treasured moose from Santa Maria. A holiday whimsy became his identity forevermore. However, the true guardian of Casey’s “social club” is her best friend Nellie, now an angel after crossing the rainbow bridge. The Saint Bernard’s portrait hangs above Bull-Twinkle and watches over Casey as she watches over her regulars and visitors.

“Nellie was with me every day of her life,” said Casey. “She mingled except when she’d wander down to Marie’s dress shop. Folks would ask if Nellie was her dog, then probe Marie where the dog’s owner was. She’d tell them ‘Either at the bar two-doors down or the bar across the street.’ She’d never tell them I owned both bars.” It might be Casey’s favorite Nellie story.

About eighteen years ago, Casey discovered the bar business. She enjoyed the neighborhood familiarity of the 1980-90’s television sitcom series, Cheers, and learned “…to understand how to create an atmosphere where people wanted to be.” When she jumped, she was all-in. Although she has now downsized, she once owned three Morro Bay bars: Legends, formerly called the Old Circle Inn; the Buoy in north Morro Bay; and Happy Jacks across the street, which she renamed the Fuel Dock. New ownership expanded it into The Siren, a popular music venue.

Over the years, Casey has experienced multiple economic shifts trying to destroy her businesses. She thought the worse was 2008. What she calls “the sub-prime mortgage hit” kept her construction patrons away. Stay-cations and tourism-intended events barely filled some gaps. She weathered impacts due to Highway One’s mudslides and fires north, south and east. She held on trusting, “When triple digits hit the valley, we’ll be flooded with visitors.”

There was that time when Casey’s entire livelihood was at risk, so much so that even the Morro Bay Car Show couldn’t bail her out, but she refused to give up. She tested music Sunday afternoons at the Fuel Dock. Bands started asking for play dates so she added Saturday afternoons, then Friday nights and Thursday jam sessions. Even her Legends’ patrons decided they could venture across the street for the music. She’d dodged another bullet.

But Covid-19 ended her record seventeen-year open-daily policy. “I never closed even Thanksgiving and Christmas. Some people just need a place to be,” Casey said.

“I think it was St. Patrick’s Day, – no the night, before – when bars were told to close. I tried to keep current on so many changes.” Her never-give-up attitude looked for a solution. “Restaurants with bars could open, but we couldn’t. I read some bars linked with food trucks to stay open. I called my guy at the ABC office and told him I’d made food available for seventeen years through a window opening to her neighbor, Sabetta’s Pizza. He went for it.” She wasn’t nervous when Morro Bay police and the fire marshal checked the first night she re-opened. “I follow the rules. I don’t want to ruin it for other bars in our area.”

Casey accepts that her new normal comes with added costs. Although it now takes two employees to operate the hours that one easily could handle before Covid-19, she likes the energy outdoor dining has created in downtown. Hauling tables and chairs in and out every day is a nuisance and she’s not crazy about policing patrons about wearing masks and social distancing, but she knows it’s what she has to do for now, but…

If Casey Kelso could influence one thing that would help her and her fellow downtown business owners bring and keep more business in Morro Bay’s downtown area, it would be a public bathroom that would stay open when visitors and locals want to shop and discover what’s available on Main Street and Morro Bay Blvd.

Casey will handle after hours. Legends always has. “I plan to be here to take care of my own.”