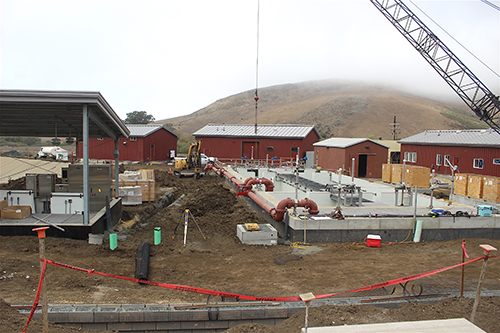 Work on the Cayucos Sanitary District’s new treatment plant has progressed quickly, with the district expecting to be completed and ready for testing in early 2021, and to go online shortly after that.

CSD General Manager, Rick Koon, and Dylan Wade an engineer with Water Systems Consulting, which designed the $25 million project, gave this reporter an exclusive tour of the job site, which has come a long ways since breaking ground in August 2018.
Once just a vision, the new facility has the look of a farm, with red buildings trimmed in white, in a rural, indeed bucolic setting amongst farmland on Toro Creek Road.

Koon said the project is still on budget and has seen just 2% in change orders under the contractors, Cushman, Inc. Koon said they have not had to go back to residents for an unscheduled rate change, which they set in 2015 at $94 a month.

There is another scheduled rate increase coming in July, he explained, that will bump the cost up to $98 a month.
The CSD has come a long ways in a relatively short period of time. The CSD broke from Morro Bay in April 2015, after the City proposed a new agreement for a new plant that basically called for the CSD to pay 40% of the costs and become a customer of

Morro Bay and not a co-owner. It also gave the CSD zero control over the wastewater that would be available for reclamation.
The two agencies have been partners for decades and together rebuilt the Atascadero Road sewer treatment plant in the early 1980s. But the terms proposed were unacceptable and the CSD decided to pursue its own project.

And while the two agencies still jointly own and operate the existing treatment plant, the boards have not met in person for over 5 years. The ultimate disposition of the property on Atascadero Road has not been discussed. “We’ve been focused here,” he said.
Things had been going almost flawlessly with construction, until a few weeks ago when a worker with one of the subcontractors doing horizontal drilling for a sewer main was killed in a tragic accident. OSHA is reportedly investigating.

“There have been no other mishaps on the job,” Koon said.

Contractors on the job have been WSC for design and initial feasibility studies; Cushman, Inc., which is building the plant; David Crye General Engineering (of Morro Bay), which did the grading for the plant site and is the contractor for the installation of the needed pipelines.

Electricraft (of SLO) has done the electrical wiring of the plant and Raminha Const., of Atascadero is installing a new lift station by the highway.

“Cushman is doing an exemplary job,” Koon said. “They’ve given us invaluable input. They’ve built plants like this before.” On several occasions, he explained, Cushman’s people on site have looked at plans and suggested changes that made the job easier. “Cushman’s been great.”

Koon said that some 30 people have been given tours of the work site. “A lot of the community is interested,” Koon said. “There’s a lot of community pride. This is a great project.”

Walking about the job site, which is still very much a work in progress, Koon and Wade start the tour where the sewage comes in, at the head works where screens sift through the flow removing inorganic materials that get flushed down toilets. As with most of the plant, there is two of everything for redundancy.

Work on the guts of the “membrane bio reactor” or MBR plant, two 25-foot deep basins, is winding up. Both will be filled with biological organisms that eat the solids in the waste flow, becoming cleaner and cleaner with each subsequent segment.
A dry pit with 10-horse electric pumps and pipes is still being worked on by pipefitters, part of the recirculation system of the MBR sending wastewater twice through the basins to keep the critters fed.

The third level of treatment consists of a series of pipes with tiny holes that wastewater will get sucked into, with the holes filtering down to the tiniest (1 micron) of particles.

The plant uses two disinfection chemicals, chlorine and citric acid, and finally, ultraviolet light — two circular arrays of 60 UV light bulbs each — that will all combine to produce so-called “Title 22” water, which Koon said allows for unrestricted reuse.
The plant has a groundwater well that will supply all the water to the bathrooms, showers and administration and maintenance buildings, but all the landscaping will be watered with treated wastewater, even the fire hydrants will be charged with reclaimed water in a 130,000 gallon storage tank.

And they’re using the cheapest pumping method. “It’s gravity flow all through the system” Koon said, “until the forced filters. Then it’s gravity flow out to the ocean.”

They reached back to Ancient Greece for one of the components, an Archimedes screw that will squeeze the final water out of the plant’s sludge (sending it back through the plant). That sludge will drop into a dumpster that will be sent to the Cold Canyon Landfill to cover the mounds of garbage.

Eventually, they hope to recycle the wastewater by pumping it over the hill to Whale Rock Reservoir though for now, it’s getting discharged into Estero Bay.

“Next is recycling,” Koon said. “We’re going to pursue a Whale Rock pipeline after we get this thing working. Right now it’s all just theory. For now it will have to go into the ocean.”

Over the next 5 years, Koon said, they will establish a history of the plant’s treatment and testing of the wastewater in the hopes that when the time comes, they can store the water in Whale Rock Reservoir, where Cayucos’ drinking water comes from.
That would pretty much secure the town’s water supply far into the future.

The CSD is also working with Rec Solar of SLO on a 1-megawatt solar energy farm on property the CSD owns next door to the plant.
Koon said they would buy energy at 8¢ a kilowatt in a “power-purchase agreement” that will save the CSD $8 million in energy costs over 25 years.

They are also considering possibly putting in a battery storage facility in the future.
Koon said they received a $24.7 million loan from the U.S. Department of Agriculture and $4.5 million in USDA grants that will pay for the entire project.

The final interest rate has not been worked out yet but Koon anticipates that it will be somewhere below 2% and there are “no strings attached,” meaning that the project isn’t required to actually recycle the wastewater, though they will certainly be in a position to do so when State law allows.