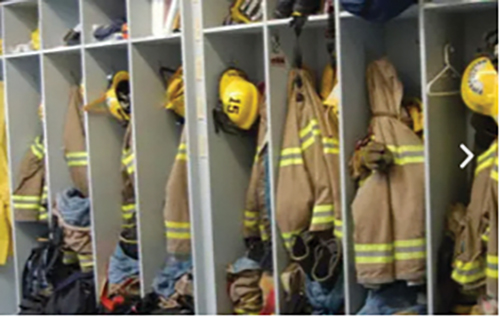 She’s been home to countless firefighters in her life, but old age is creeping in, and the owners want to give her a complete physical.

“Station 15,” reads a staff report from LOCSD General Manager Ron Munds, “was built in phases; the first phase in the 1960s and the second in the 1970s. There was some renovation work done in the early 2000s.”

Munds pointed out that they had asked for money to conduct the inspections with the current fiscal year budget (2022/23), as part of an overall bigger effort to plan for the station’s eventual replacement.

The stationhouse was home for decades to the former South Bay Fire Department, which operated independently, funded through special property tax assessments.

When the CSD was formed in the late 1990s, the fire department was moved under the CSD’s umbrella. But just a few years later, the CSD sought fire services under a contract with Cal Fire/County Fire.

It will also give the LOCSD board a snapshot picture of the building’s current state, as well its various components, “particularly with respect to safety, energy efficiency and current building codes, and provides information on the lifecycle and useful remaining life of the building, building elements and systems, identifies and prioritizes major maintenance deficiencies, and provides cost estimates to repair or replace deficiencies.”

While Cal Fire/County Fire manages the staffing as well as the apparatus, the building is the CSD’s responsibility. The assessment will have three goals:

• Identify any major defects or deficiencies in the Station;

• Provide a basis for forecasting funding requirements for capital improvement planning over the next 10 years; and,

• Provide a baseline for setting priorities for the maintenance, repair, enhancement or replacement of the Station and its component systems.”

Replacing firehouses can be an expensive endeavor, costing millions of dollars, however, low-interest funding from the State and Federal Governments has often been used to pay for them.

The City of Morro Bay tapped a USDA rural assistance loan to pay for its new Harbor Street Firehouse nearly a decade ago. Then citizens passed Measure Q, a half-cent local sales tax pledging to use part of that money to pay the debt service. It’s worked out smoothly for that city.

Also, the County tapped the same USDA funding for the community sewer project, but it took an act of Congress — steered through by former Congresswoman Lois Capps — to waive the population requirements for the program. The rural assistance fund is supposed to cut off at population 10,000 and Los Osos is closer to 15,000.

The LOCSD laid out the scope of work the assessment will do — HVAC systems, the roof, the electrical systems, plumbing, building envelop, and structural components, i.e. the foundations, footings, concrete slab, columns, and floor and roof framing, to check for “soundness.”

It should be noted this will be a sight inspection, “subject to grade and visibility of components,” and no excavating will be done.

The engineer’s estimate for the study is $50,000 but true costs won’t be known until bids come in and a contract is awarded.

“If the most responsive and responsible proposer’s cost is more than 20% or $60,000 of the estimate of $50,000, staff will return to the Board for approval of the agreement.”