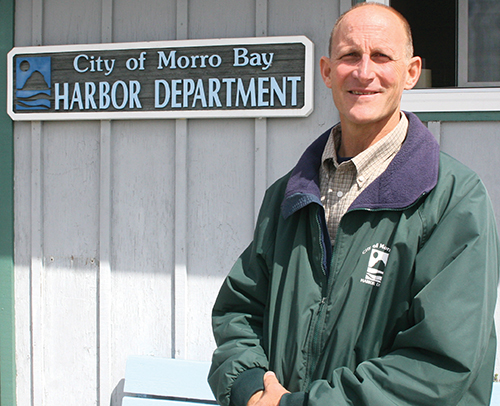 The City of Morro Bay has begun a search for a new harbor director after current director, Eric Endersby announced his impending retirement last week, effective just in time for Christmas.

Endersby, who worked his way up the ranks — from a reserve officer to full time officer, then chief officer and then director of the whole Harbor Department — said his last day will be Dec. 23, ending a career that spans nearly 30 years.

“Director Endersby,” the news release said, “has served the City for nearly 30 years, beginning as a Reserve Harbor Patrol Officer in 1993. He served in a variety of increasingly responsible roles in the Harbor Department, ultimately promoting to Harbor Director in 2012.”

Endersby was the Chief Harbor Patrol Officer when he got the department head job after the previous director, Rick Algert, retired, becoming just the second department director in over three decades.

His tenure has included steering through some murky waters with regards to management of the waterfront lease sites, and balancing a tight budget with a growing list of maintenance and equipment needs, including replacing patrol boats.

City Manager Scott Collins said, “Eric is an exemplary public servant, and we greatly appreciate all he has done to transform the Harbor over his 30 years with the City. He demonstrated a rare combination of skills and backgrounds in his role – boating, public safety, diplomacy, and a business acumen — in leading the Department.

“We will miss Eric’s leadership, kindness and good humor which helped the department, the executive team and community navigate through the challenges of the pandemic. We are excited for him as he prepares for the next stage of his career.”

Endersby reflected on his tenure with the City, “Winston Churchill once said, ‘We make a living by what we get, but we make a life by what we give.’ When I started with the City as a reserve harbor patrol officer, I never dreamed it would lead to a 30-year career of public service.

“While that career has defined my life,” he continued, “it is time to move on to the next chapter. I am deeply honored to have served this community alongside my City brothers and sisters those three decades, and am infinitely proud of the work my Harbor Department team accomplish on a daily basis. Their skill, passion, determination and loyalty are unsurpassed. Thank you all, and thank you Morro Bay.”

Endersby will return to his previous work, of sorts, as he is going to teach a class at Cuesta College in airplane mechanics. Before he hired on with the City, he was the aircraft maintenance supervisor for American Eagle Airlines at the San Luis Obispo County Airport.

Finding a replacement has already begun. The City “will engage outside support to facilitate the recruitment process and include the community, harbor professionals, waterfront businesses, and the Harbor Department staff in the process to ensure a good fit in the next director.”

Under the City’s current salary schedule, the Harbor Director’s salary range is from $146,700 at the low end to $178,000 at the top end of the scale. The job comes with a full complement of benefits. Of note the salary schedule lists “Harbor Director” as a “sworn” position, along with the police and fire chief.