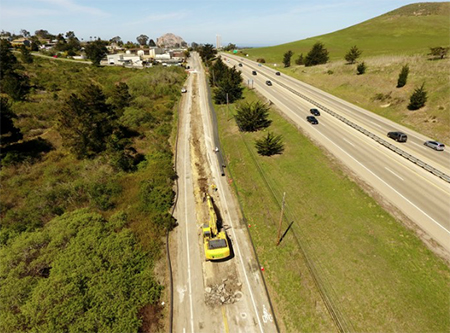 Mr. Murphy is no doubt laughing. Morro Bay’s new sewer project hit a couple of snags recently, when they accidentally broke a water main and then ruptured a temporary sewer line on the very day they started the massive trenching work.

They didn’t have a good day, said Joe Mueller, the City’s sewer and water department head who was also the City’s acting Public Works Director until recently, when the City Manager hired a new full time director.

Mueller said they got called about 1 p.m. Wednesday, April 7 to the construction site on Quintana Road at La Loma Street.

“One of their backhoe operators hit a known water line,” Mueller told Estero Bay News. He added that the water line was marked in the street (along with all other utility lines) and that the company had yet to tell the City why the accident occurred. “It was definitely their responsibility,” Mueller said, “and they are taking responsibility for it.”

The City’s maintenance crew responded to the scene, cleaned up the mess and repaired the water line, he said. It took about 4 hours.

He estimated that 54,000 gallons of drinking water was leaked directly from the City’s Kings Street water tanks. That’s where the City receives state water deliveries and blends treated groundwater from the Morro Creek Basin at Lila Keiser Park for delivery throughout the City.

Mueller said numerous customers lost water pressure but no one completely lost water service because of Anvil’s line break.
Just as they were getting finished up fixing the water pipe, Anvil had another mishap about a half mile down Quintana.

Mueller explained that as part of the project, the City’s lift station 3 (LS-3), which sits underground near the intersection of South Bay Boulevard and Quintana Road, has to be temporarily bypassed so they can redirect the flow.

The WRF project calls for installation of a series of pipes running from the old treatment plant site on Atascadero Road to the new WRF plant on the hill above the end of South Bay Blvd., over 3 miles and a few hundred feet in elevation. The direction of LS-3 will have to be rerouted to push the City’s sewage up to the new WRF plant.

To bypass LS-3, they installed an aboveground sewer pipe that runs parallel to Quintana Road. Mueller said they were in the process of placing barricades to protect it when they hit the line and punched a hole in it.

Mueller said that break was near LS-3 and the City crew responded and redirected the spilled sewage back down a sewer manhole.
He estimated about 1,100 gallons of sewage spilled and they were able to capture 650 gallons of it. Some of it absorbed into the ground.
“It did not make it to the bay or any waterway that leads to the bay,” Mueller said.

He said they called County Environmental Health and the Regional Water Quality Control Board. The determination was made that it didn’t enter any waterway of the State, he said.

What about the “wetland” on the opposite side of Quintana from the lift station running parallel to the road? That was of great concern to the Coastal Commission when the condo project was under consideration.

Mueller said they consulted with the agencies and determined it was a drainage ditch and so concluded the sewage did not enter a waterway. Plus the spill was less than 500 gallons so wasn’t considered a “Class 1” spill, which could bring a hefty fine from the state.

Mueller said they planned to bill the company for the City crew’s time fixing the two pipe ruptures and cleaning up the messes, as they knew the marked water line was there and the sewer line is above ground.

Other than these day-1 incidents, Mueller said the job is progressing, with work started on two new lift stations — one on Main Street (LS-B) next to Lemos Ranch Pet Supply Store and the other at the City’s Corp Yard on Atascadero Road (LS-A).

He said the Main Street site is a challenge because it’s so small but work is going faster at the other site where room to work isn’t a factor. The Main

Street lift station is supposed to be 30-feet underground, so a tremendous amount of dirt will have to be trucked and stored off site.

Commenting on a recent burglary at the WRF site, where some $150,000 worth of equipment was stolen, including some rented equipment, Mueller said it didn’t slow them down much, as there were other areas of the project they shifted workers to.

Travelers on Hwy 1 can take a glance at the WRF construction site on the South Bay highway bridge. You can now see a large steel building going up. Mueller said it’s the operations building, and a little further back on the site tucked against the hillside and not visible from the highway, is the maintenance building, which is a little further along with construction.

Work on the $131 million WRF project started over a year ago with completion due by the end of 2023, under an order from the RWQCB.