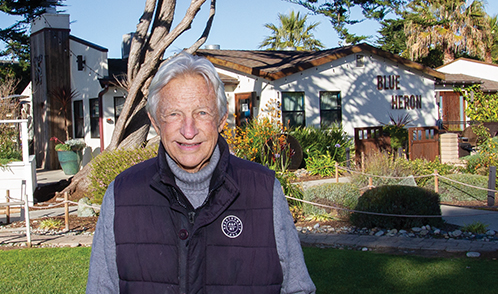 Bill Lee, who died April 5 from cancer, left a legacy of innovation on the real estate industry across the U.S. and Canada, mentoring and inspiring thousands of real estate professionals; but he’ll also be warmly remembered for the significant mark he left on Baywood Park.

Bill Lee founded the Lee & Associates firm in 1979 in Orange County and over the years the company grew into 65 offices and over 1,300 employees, with a yearly consideration value of $14 billion, according to an obituary posted on the company’s website.

“On this difficult day,” Lee & Associates CEO, Jeffrey Rinkov said, “I stand in tremendous appreciation with the thousands of real estate professionals and their families that have been so positively impacted by the company Bill created and the unique structure that has served us for 41-plus years.”
“Bill’s passing will be felt throughout Lee & Associates and the greater commercial real estate industry.”

Bill Lee had an incredibly successful and productive life in both business and a human level. When he died, the loss was felt here at home, as he had for many years been a driving force in the revitalization of Baywood Park, and contributed greatly to the renewed sense community and sheer fun that he brought to the tiny little commercial district by Baywood Inlet and mudflats.

John Lee, Bill’s son, said his dad fell in love with Baywood Park almost by chance. He said his father became interested in Baywood in 2001 when he visited the area while looking for a place for he and his second wife to live out their retirement.

“They wanted to move from Dana Point and traveled north,” John said, “not knowing where they would end up.”
He’d been to Los Osos in the mid-1990s to visit two of his sons who live here. The return trip in 2001, and a stay at the Back Bay Inn, made quite an impression.

He fell in love with the area, John explained, the nature, the bay, the waves, and the people, whom he admired for a lack of pretentiousness.
He settled into a quiet life tending a little farm and growing tomatoes. Then the Back Bay Inn came up for sale and John said his dad immediately wanted to buy it.

“He had no experience in the hospitality industry, but there was an emotional connection due to his stay there and he had a vision for what he could create on the property with his love of gardening.

“He knew that it was already a spectacular spot, but he saw it as something that he could put his energy into and make it even more beautiful for the community and the people that stay there.”
Over time, other properties came up for sale or lease and he saw it as an opportunity to expand the beautification he’d begun at the Inn. He rented a cottage at 3rd and El Moro, John said, and created a community garden space.

He also bought the former Don Julio’s Restaurant space, and remodeled it inside and out and opened The Blue Heron, bringing his vision of an elegant, farm-to-table style eatery, growing the vegetables himself on his farm — picked and served in the same day. He also picked up the Back Bay Café.
“His philosophy was not to get rich on Baywood,” John said, “it was to put his time, energy, and finances into making the place as special as he could because he thought that it was as worthy a location as you could find, and that the people in the community deserved it.”
Bill Lee’s father was a band leader and woodwind player in the Big Band Era of the 1930’s and ‘40’s, John said, and Bill carried the same musical genes, as have all four of his children.

Having regular live music and festivals on his properties was important to him, John said, “because he knew that music brings people together and he valued it in the community.”

Paul Irving, a local businessman, trumpet player with Zongo All Stars, and publisher of Big, Big SLO, a live entertainment guide for SLO County, teamed up with Bill Lee in many of those musical offerings that have now been woven into Baywood’s fabric. It started with the Inn’s transformation into an outdoor concert venue.

“We christened that by hosting Oktoberfest 2007,” Irving said. “That was also the first live gig for Zongo All Stars.” That kicked off a musical relationship with Bill Lee.

“He was a very gracious host,” Irving said. “He made Baywood nice and accommodating, not just for tourists but for the whole community to enjoy.”
They also worked together on the “Beer at the Pier,” an outdoor concert series hosted by Lee’s Back Bay Café in the spring, summer and into the fall months (The shows moved across the street and indoors in winter).
The ultimate challenge arose when the Merrimaker came up for sale; he just couldn’t resist. The infamous corner bar that for years was hit with the label of “quintessential dive bar,” on Wikipedia was in need of some TLC.

“He put his energy towards fixing it up,” John Lee said, “with the idea of making it the best possible experience going forward for the community. He was proud that the people who worked on the renovation are Los Osos locals.”
John said his dad certainly was a transcendent figure in the real estate industry and, “he put the same amount of energy into Baywood as he did into Lee and Associates, the Real Estate company that he founded.”