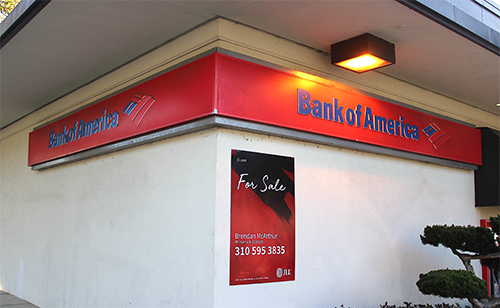 It’s one of the largest buildings in Downtown Morro Bay and for several years now, the Bank of America building has sat empty, its large parking lot taken over for public parking.
But what looks like a frozen-in-time empty shell, could see new life now that the bank has finally listed it for sale. The big red “For Sale” sign went up after Bank of America installed two ATMs outside the Sinclair Gas Station, located down Morro Bay Boulevard at the Roundabout.
That had been the sticking point for putting the property up for sale, as the bank first wanted an ATM site in town. The ATMs at the bank have now been removed and the Bank of America banner signs are gone, too.
The property is being listed by JLL (Jones Lang LaSalle), a global commercial real estate services company, base in the United Kingdom (see: us.jll.com).
The listing goes into great detail about the location, the community, the business climate and potential for redevelopment of the 0.74-acre site bordered by Morro Bay Boulevard, Pacific Street and Monterey Avenue.
The property has an 8,451 square foot 2-story former bank building, with 6,451 s.f. on the ground floor and 2,000 s.f. on the second floor.
It features a large parking lot behind the building and the total area of the property is 32,135 s.f.
It’s one of the largest Downtown lots and could mark the first potential major redevelopment in the Downtown business district since the mixed-use building at Shasta and MBB, where Morro Bay Drug & Gift is located.
Before that, the old Rexall Drug Store at MBB and Morro Avenue was torn down and Ascot Suites built around 2000.
Redevelopment opportunities like this just don’t come along very often in Morro Bay’s “Old Town” district.
“The Site is part of the City’s vibrant Downtown commercial area,” reads a description on JLL’s website, “and is steps away from the bay. Although the Site is currently improved with a former bank branch and parking lot, it could potentially accommodate a wide range of commercial uses including a restaurant, professional or medical offices, or personal services. The offering presents an outstanding opportunity to acquire a development site within a renowned Central California tourist destination.”
In the City’s update of the General Plan and Local Coastal Program, the final environmental impact report for which went before the Planning Commission last week, the property is having its zoning changed to “Community Commercial” and “Transitional Mixed Use,” according to JLL.
“Community Commercial” zoning is defined as: “Community-oriented uses including retail stores, restaurants, professional and medical offices, and personal services. Residential uses are allowed both above and behind commercial uses with discretionary approval.”
So, the future for the site is pretty open and at least one local business family had looked into a possible motel for the site.
The sale is being done a bit differently, as the listing has no asking price posted anywhere.
JLL explains: “This offering is being distributed exclusively by JLL to a select group of pre-qualified investors. The prospective investor will be selected by Owner in its sole and absolute discretion based on a variety of factors including, but not limited to:
• Offer price;
• Financial strength;
• Level of discretion to invest funds;
• Ability to close in a timely fashion;
• Absence of contingencies;
• Level of property due diligence completed; and
• Thoroughness of Property underwriting.”
Last November, during a Chamber of Commerce sponsored walking tour of Downtown business opportunity sites, City Community Development Director Scot Graham commented that the Bank of America property’s split zoning left a lot of possibilities for redevelopment on the table.
Towards the back and above on a second story, Graham said, there could be residential. “The City Council is interested in that,” he said, adding that the planning department had a lot of people come in asking about it. “This could be a real energizer for Downtown.”
Chamber CEO Erica Crawford echoed that sentiment. “Your assessment of this opportunity is spot on,” she told EBN. “It’s a whole half block in our Downtown core and sits adjacent to multiple vacant commercial spaces to the west. Downtown business owners are eager for occupancy on Morro Bay Boulevard between Monterey and Main.”
She noted the City’s 2017 “Economic Development Strategic Plan” said, “For Morro Bay’s Downtown to realize its potential as a strong economic center, concerted efforts to change the retail and service mix to appeal to residents and a broader range of visitors should be a shared priority for the city and business and property owners.”
And, “More intensive reuse of vacant and underutilized properties along Morro Bay Boulevard would also contribute to a continuous flow of retail and service (stores, restaurants, etc.) and with improved public assets (benches, mini parks, landscaping) would help achieve a ‘continuous’ experience between the Downtown and the Embarcadero/Waterfront.”
The Chamber would like to see action. “We’re of the mindset that plans are made for implementation,” Crawford said, “not for shelves. So we will be looking for redevelopment to accomplish some of the plans in both the EDSP and the catalyst projects in the council-adopted ‘Downtown Waterfront Strategic Plan.’”
The new zoning with its emphasis on housing is “a bread and butter issue for our members,” Crawford said. “The lack of housing in our community leads to increased employee turnover and increased cost.”
The Chamber looks forward to the site’s future. “This is an exciting opportunity,” Crawford said, “and one that we have been engaged in for years, since the closure of the branch. Now that the ATM has been successfully relocated and the property put on the market, we have every intention of forging a proactive and positive relationship with the buyer.”
Readers can check out the listing themselves online at: https://my.rcm1.com/handler/brochure.aspx?pv=V5WL457a0mECxu7ME8z5QC6uN1ByZOKutLOFthOOpA4.