How to Vote in the Recall Election 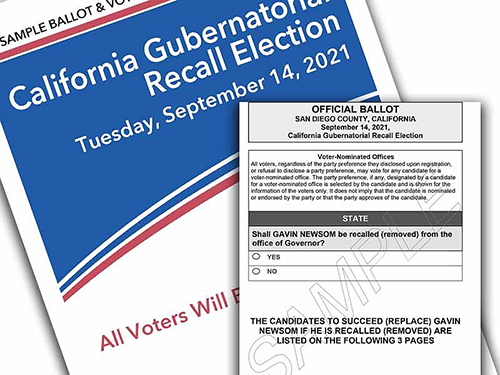 The decision as to whether to recall Governor Gavin Newsom and who would replace him is in the hands of voters. Mail-in ballots rolled out earlier in the month for the Sept. 14 election.

All 22 million registered voters in California have the opportunity to make their voices heard by answering two questions. The first is “Shall Gavin Newsom be recalled (removed) from the office of Governor?”

The second question asks voters to choose who should replace Newsom if he is recalled. A majority vote is required on the first question — if 50% or more vote “no,” the governor will remain in office. If more than 50% vote “yes,” the candidate with the most votes on the second question would win the election with no majority required.

There will be a list of all 46 candidates, not including Newsom, for voters to consider, 24 Republicans, 9 Democrats, 10 “No Party Preference” candidates, 2 Green Party and 1 Libertarian.

Folks are encouraged to answer both questions, but it is not mandatory for a vote to be counted. All votes on all valid ballots are counted.

“You absolutely can vote on one or both questions,” San Luis Obispo County Clerk-Recorder Deputy Director Helen Nolan told Estero Bay News. “It’s completely up to the voter. All votes will be tabulated and reported to the Secretary of State. Just because someone may vote “no” to recall, doesn’t mean they don’t have the right to also select the replacement.”

A vote for a replacement candidate does not imply a “yes” vote on the recall question.

About 185,000 ballots went out in SLO County last week, and Nolan is expecting a high return rate.

“In the November election, we received a record amount response; I believe it was 88.35% of all registered voters voted, which is amazing,” Nolan said.

“We were fourth in the state for voter turnout. We’re very proud of that. I’m hoping to see a really high turnout in this election as well.”

Ballots can be returned by mail, dropped off at any one of the 17 official ballot boxes throughout the county, in person to the County Clerk-Recorder’s Office, or at any polling place on Election Day between 7 a.m. and 8 p.m. Be sure to sign your vote by mail return envelope or your vote will not be counted.

Nolan recommends getting ballots in as soon as possible.

“I would recommend going into the post office and getting it postmarked,” she said. “We can accept a ballot if it is postmarked on or before September 14th up to seven days beyond the election only if it’s postmarked by the postal service. Otherwise, it has to be in our hands, no later than 8p.m. on election night.”

Readers can also drop of their votes in ballot boxes, subject to their operating hours, at the Los Osos Library, 2075 Palisades; Cayucos Library, 310 B Street; Morro Bay Library, 625 Harbor St. and Cambria Library, 1043 Main St. All Ballots returned at these boxes are collected directly by the election office.

Folks can also vote in-person at their polling location on Sept. 14. Keep your vote by mail ballot to surrender at that time, and you will be given a new ballot for in-person voting.

If you did not receive your mail-in ballot, first to check your voter status slocounty.ca.gov to make ensure you are properly registered. After that, call the County Clerk-Recorder office at (805) 781-5080.

“We may be able to fix it here in our office with a simple phone call,” Nolan said. “You don’t necessarily have to re-register, because that triggers a reissue in our system. We are absolutely going to do everything within our power to get a ballot into the hands of people who want one.”

If the two don’t match, we will send a letter to the voter, so that they can, what’s called, cure the signature.”

Newsom was elected as governor in 2018. This is the first gubernatorial recall election in California since 2003 when voters replaced incumbent Democratic Governor Gray Davis with Republican Arnold Schwarzenegger. The estimated cost of this election is $276 million.

← Previous: What the Heck Kind of Intersection is That? CSD Wants Input on District Elections →