What the Heck Kind of Intersection is That? 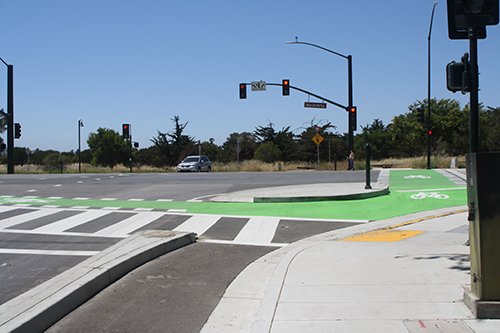 The many folks who live on the North Coast and make frequent trips to and from SLO for work or special events will likely come across a screaming green new type of lane on the road.

A protected intersection, the first of its kind in the county, was installed at Madonna and Dalido roads. It is designed to increase safety for driving, bicycling, and walking.

This new protected intersection is the first of its kind in the county and more are planned throughout the city to improve traffic safety.

The intersection opened a few weeks ago and provides a more comfortable way to take left turns by bike without having to merge across several lanes of motor vehicle traffic.

“There are separated bike lanes adjacent to the crosswalks,” said SLO Active Transportation Manager, Adam Fukushima. “Folks on bike typically make left turns by using these bike lanes by riding around the perimeter of the intersection rather than crossing lanes of fast moving vehicular traffic, which is uncomfortable for many people to do on bike. “

“[It] can help reduce collisions with people walking and bicycling,” said SLO Active Transportation Manager, Adam Fukushima. “So called ‘right-hook collisions’ are one of the most frequent types of collisions in the city and can be helped with improvements such as these protected intersections by reducing the speeds of motor vehicles when making right turns as well as reducing the crossing distance for people on foot.”

The newly constructed intersection began in 2020 as part of transportation improvements approved by the city council related to the San Luis Ranch development project. The protected intersection is open but will be completed in late summer 2021 when a shared-use path is connected to Madonna Road.

Protected Intersections have been a best practice design for decades in Europe and are quickly gaining popularity across the United States to improve safety and comfort for all road users in cities like Davis, CA; San Jose, CA, and Salt Lake City, UT, Fukushima said.

For a video on how to navigate the new intersections, go to slocity.org.

← Previous: County Urges Wearing Mask Indoors How to Vote in the Recall Election →