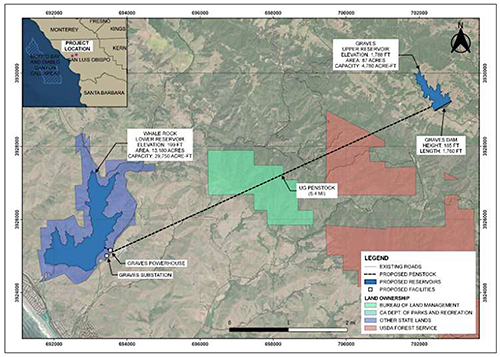 A Southern California energy company is applying for permission to study potentially building a hydroelectric plant at Whale Rock Reservoir in Cayucos.

The project would build a small earthen dam in the hills about 6 miles northeast of Whale Rock and much higher in elevation than the reservoir.

“The Whale Rock PSH would add storage resources to the state’s clean energy portfolio and would help in the goal of reducing carbon footprint, improving the grid’s reliability and flexibility, and meeting customer’s needs.”

It’s a concept that would store carbon-free energy from wind and solar while it’s plentiful, i.e. when the wind is blowing and the sun is shining, and release it back into the power grid when supply drops off at night.

The State’s efforts at sustainability and carbon-free energy involves lots of storage facilities — like the “Battery Energy Storage System” or BESS being proposed by Vistra Energy owners of the Morro Bay Power Plant, and an “Advanced Compressed Air Energy Storage” plant being proposed by Canadian energy company, Hydrostor. Premium Energy’s Whale Rock project is one of several hydro projects it is pursuing at several water reservoirs.

The BESS, which is being reviewed by the Morro Bay Planning Department, is a 600 MW lithium-ion battery facility and would be the largest battery plant in the world.

Hydrostor’s project proposes to use new technology the company invented to store up to 400 MW of pent up energy in the form of pressurized underground tanks that would release the energy back through turbines that convert it back to electricity to feed back into the power grid.

SLO County, which for decades has seen the closure of numerous energy facilities, is moving back towards industrialization, albeit switching from oil, gas and nuclear power, to new-fangled sustainable, so-called green energy facilities.

The County is home to several commercial sized solar farms and is a prime target for offshore wind energy, too. But the Whale Rock hydro proposal is a first and something that caught the people who run the reservoir and 18-mile Whale Rock pipeline by surprise.

When EBN first learned about the project, it sought comment from the Whale Rock Commission, whose staff is from the City of SLO’s Utilities Department. But they hadn’t heard anything about it.

Mychal Boerman, City of SLO/Whale Rock Commission Utilities Deputy Director, said after being made aware of the proposal, they were going to study the application and present it to the commission with their analysis and so declined to comment at this time.

Trevor Keith, the SLO County Planning Director hadn’t heard anything about it either. The location of both Whale Rock Reservoir and the proposed new dam and reservoir are within the County’s jurisdiction.

“The Department of Planning and Building,” he said in an email, “has not received an agency referral or initial inquiry from the applicant for the proposed project. Local land use permit requirements for energy storage or generation projects will depend on the project scope and location, and whether there are any exemptions from local permitting requirements under state or federal law applicable to the proposed project.

“Preliminary determinations of local permitting requirements for energy storage or generation projects are generally made after receipt of agency referrals and/or pre-application meetings with applicants and consultation with other regulatory agencies as applicable.”

The County is also being cut out of the approval process for Hydrostor’s Pecho Energy Center off Hwy 1.

The California Energy Commission isn’t involved either. “The CEC does not license hydropower projects,” Sandy Louey, the CEC’s Media Relations Manager said in response to a request for information sent by EBN. She recommended the newspaper speak with the California Department of Water Resources, which also knew nothing of the Whale Rock project and directed questions to FERC. The CEC is however, involved in Vistra’s and Hydrostor’s projects.

Under the FERC’s process, a preliminary permit, which is what Premium Energy applied for, doesn’t authorize construction or any land-disturbing activities; is good for 3 years with possible extension for two more years; reserves the site for the permit holder; requires progress reports; and no dam or land ownership is required.

Should the company be granted a preliminary permit, it would then have to do all the necessary environmental, hydrogeological, archeological, and engineering studies and more before a license would be considered.

So the application Premium Energy Holdings filed is the first of many steps and doesn’t necessarily mean there will ever be a hydro-electric plant built at Whale Rock.

“Should a permit holder choose to move forward with a project, they must file a license application. The licensing process is separate and includes a variety of steps, including a complete environmental review process with public comments.”

Premium Energy’s project would build a new upper reservoir, named “Graves Reservoir,” realigning an existing road in the process. Graves Reservoir would be located on private property, the application said, and the penstock (underground feed water pipes) would pass through several other private lands.

The project’s powerhouse, where the turbines and generators would be housed, would be built on land owned by the State of California, the application reads. The lands surrounding Whale Rock Reservoir are owned by the State and managed by the Whale Rock Commission, which started building the dam in the late 1950s. It was completed in 1961.

The Graves Reservoir would store some 4,700-acre feet of water, and be at an elevation of 1,788 feet. It would feed a flow of water down to the powerhouse with four sets of 150 MW turbines.

The project would then pump the feed water back uphill to the new reservoir, where it would sit, essentially as “potential energy.”

The first trick will be filling the Graves Reservoir, with a surface area of 84 acres, with water, which is proposed to come out of Whale Rock, which has a capacity of over 38,000 a.f., but is currently at 75% capacity.

However, “Once the proposed upper reservoir is filled with enough stored water for project operation, water will not be taken from Whale Rock Reservoir, except for small amounts to make up for losses due to evaporation. Percolation losses will be controlled using geomembranes covering the bottom of the upper reservoir.”

There would be over 1,500 feet of elevation difference between Whale Rock and Graves reservoirs.

And, “Aside from the construction of the new embankment for the new upper reservoir, a hydro power penstock or pressurized tunnel will be required to connect the reservoir to the powerhouse. The pumped storage powerhouse, generating/pumping units, electrical switchyards, interconnecting transmission lines, and other appurtenant facilities would complete the project.”

The project will operate in a “closed loop” system, and reuse the water “in a cyclic manner and no more significant amount of water will be diverted from Whale Rock Reservoir once the upper reservoir filling is completed.

“The project’s proposed reservoirs will provide enough water storage capacity for the minimum capacity of 600 MW continuous output for a minimum of 8 hours.” But the application said the project could be expanded to 1,500 MW or larger, with a storage duration of 48 hours, “to support grid power restoration after a major grid black out.”

The project proposes using energy from a proposed offshore wind farm being reviewed now by FERC, and slated for a nearly 400-square mile patch of ocean some 30 miles offshore from San Simeon. That energy is slated to come ashore at the Morro Bay Power Plant for connection to the energy grid.

The FERC has actually gotten several proposals from Premium and other companies, that would do similar hydro-electric plants at other California reservoirs, including Huntington Lake in the Sierras.

“Premium Energy Holdings, LLC,” reads an item on the company’s website, “is an energy development company that recognizes the future needs and interests for cleaner, sustainable, and more efficient energy sources.

“Premium provides experienced technical services and develops projects that achieve the long term goals of communities, local utilities, and large regions in their efforts to reduce the use of fossil fuels, produce and store energy, deliver power, and meet regulatory and reliability requirements.

“In the development and delivery of these projects, Premium incorporates community interests, aesthetic value, financial accountability, safety, and environmental stewardship [with a desire to develop long term and lasting relationships and a model for future projects].”

See: premiumenergyholdings.com for more information on the company.