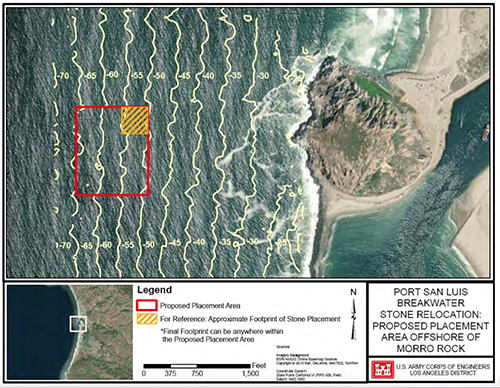 This chart shows the location of where the Army Corps of Engineers plans to dump some 10,000 tons of unusable rocks and boulders from the Port San Luis Breakwater Repair Project. The new reefs will be some 1,500 feet west of Morro Rock in 50-65 foot deep water. Photo courtesy ACOE

Fish in Estero Bay could soon have more undersea habitat; Native Americans could win a small cultural victory; and Port San Luis get a major rebuilding of its breakwater; all thanks to the Army Corps of Engineers.

The Coastal Commission May 12 was to review the Army Corps of Engineers’ (ACOE) Project to rebuild the Port San Luis Harbor Breakwater, and decide if a major change to the project still meets the California Coastal Act.

And it’s that major change that roped in the local Chumash leaders and will ultimately lead to new fish habitat just outside the Morro Bay Harbor.

The ACOE project would first dredge out the area adjacent to the breakwater so large crane barges can get close enough to work on it.

“The project,” reads the Coastal Commission’s report, “includes the repair of approximately 1,420 feet of existing breakwater by resetting stones and raising the overall height of the breakwater by 3 feet (back to its original design height and configuration).”

The ACOE will be removing some 15,000 cubic yards of “sandy sediment from eelgrass habitat to create adequate depths for barges and other construction vessels to access the breakwater during repairs,” the report said.

The dredging would remove shoaling that’s built up over time and was to begin at the end of April, lasting about a month, according to the original project. But the paperwork has delayed the start of the project.

The Commission staff had already issued a “concurrence” declaration, meaning that the federal project was in keeping with the Coastal Act. As a federal agency, the ACOE is a superior to the State Coastal Commission, but the legal process requires a concurrence so the State and Federal laws are followed.

“Following Commission concurrence and finalization of the 2021 Environmental Assessment,” the report said, “the Corps learned that the breakwater repair may result in up to 10,000 tons of displaced, existing PSL breakwater stone, which may not be able to be reincorporated back into the breakwater structure and would need to be relocated.”

Some of that stone was determined to be too small to meet the new design requirements, and “maintain the hydraulic stability of the breakwater.”

Those original breakwater boulders, some weighing upwards of 10 tons, were quarried from Morro Rock by the ACOE, which removed a million tons of rock from the late 1800s, until the early 1960s when quarrying was halted forever. Morro Rock is now part of Morro Bay State Park and protected.

As part of the quarrying operation, the ACOE built the causeway out to the Rock (now Coleman Drive) and the rock revetment that created the Morro Bay Harbor and Embarcadero business district. The spoils of Morro Rock also built breakwaters up and down the Coast, including at Port San Luis.

The change to the project got the Native American groups involved. “Morro Rock is a recognized sacred site for the Chumash and Salinan Tribes,” the Commission’s report said. “The tribes consider the existing breakwater stone as sacred, despite its removal from Lisamu’ [the Chumash name for Morro Rock]. To prevent further adverse effects to cultural resources, the consulting tribes requested that the displaced rock be relocated to an area near the PSL Breakwater or near Lisamu’, so as to retain the unity of the sacred stone as much as possible.”

So the ACOE and the tribes got together and they decided to dump the rocks offshore here, about 1,500 feet due west of Morro Rock, in Estero Bay.

In a letter from the ACOE to the Commission, the agency said, “The footprint of stone placement will encompass up to approximately 3-acres of the sandy ocean bottom at a depth ranging from approximately -50 to -65 feet Mean Lower Low Water.

“The crest height will be variable from 1-13 feet above the sea floor with an allowable upward tolerance of +5 feet and a maximum crest elevation of approximately -40 feet MLLW, so that the structures exhibit a random low to high vertical relief. Contiguous connected modules will be added based on the volume of stone relocated with additional modules being added in succession.”

The ACOE has meticulously planned out the whole rock placement, and isn’t going to just dump rocks overboard. “To maintain the unity of the sacred stone and attempt to provide higher value habitat for marine species,” the ACOE letter said, “the displaced breakwater stone would be placed in an array of up to five contiguous modules interspersed with sandy bottom habitat. Stone relocation would occur concurrently with the PSL breakwater repair, which is expected to extend from April to October 2022.

The rock barge can carry about 1,000 tons of stone per trip, the ACOE said. They will use GPS positioning to anchor the barge in an exact spot and then push the rocks off into the water.

“The stone would then sink through the water column and settle on the sea floor in the designated module locations,” the ACOE said. “Stone would be placed in sets of individual modules to maintain cohesion between all stone placed.”

Other agencies have weighed in on the project, including the U.S. Fish & Wildlife Service, which is concerned with the endangered southern sea otter. Estero Bay and Morro Bay Harbor are densely populated areas for the sea weasels, which dive on rocky reefs to hunt for shellfish and abalone.

Needless to say, the F&WS determined the new reefs would not adversely affect the sea otters. Ideally, they would become offshore living reefs and support a myriad of sea life, and potential food for otters.

Morro Bay Harbor Director Eric Endersby was aware of the project and, after the ACOE rebuilt Morro Bay’s south breakwater in the early 2000s, understands the process.

“Morro Rock stone is actually not the right stone for building breakwaters,” Endersby said. “It’s too light. So in the process of rebuilding PSL’s breakwater they are removing a good amount of stone because much of it is Morro Rock stone.”

Breakwater construction is an exacting science, with engineers carefully studying the layout of the stones and determining precisely where each new stone has to be placed to form the sort of impenetrable wall breakwaters must become.

“Breakwaters are more than just a pile of stone dumped randomly,” Endersby said, “there is actually an engineering science to placing the stone together so they ‘lock’ properly to resist the forces of nature. And if your stone is too light, it gets blown out and the system can fail over time, which is what is happening at PSL.”

He noted that the same thing is happening to Morro Bay’s North Breakwater, which extends from the base of the Rock and breaks the prevailing swell coming out of the northwest. In stormy weather, that breakwater takes a powerful battering.

The South Breakwater breaks waves coming from the south and together they form the harbor entrance, which itself shoals so badly, that the ACOE dredge ship, Yaquina, comes here every summer to dig it down to about 40 feet deep, and tame the waves across the entrance.

“Go out to the south side of the Rock on a low tide and look on the inside of the north breakwater and you’ll see great masses of stone scattered on the ‘inside’ of the breakwater,” Endersby said. “That is from when it was blown apart by high surf in 1952/53 because it was made from Morro Rock, which is too light. Morro Bay’s Yesterdays has some good photos of it on pages 124-127.”

In February, the ACOE was about a third of the way done with the quarrying of the stones for the repairs, according to Watkins’ report.

According to an April 2021 notice seeking comments on the project’s environmental review, the ACOE said, “The breakwater was originally constructed between 1889 and 1913 to protect the inner bay, harbor, and small craft marine facilities from heavy surf and wave action approaching from the west. The proposed breakwater repair is required to protect Port San Luis Harbor and maintain safe navigability within the port.”

The repair project would be using “approximately 60,000 tons of new rock and resetting of approximately 29,000 tons of existing rock. Approximately 15,000 cubic yards of uncontaminated, sandy material would be excavated adjacent to the breakwater to provide access for construction equipment.

“The Proposed Action also includes measures to offset impacts to eelgrass beds that would be affected by excavation and breakwater repair activities, by restoring habitat within the work limits and other surrounding areas.”