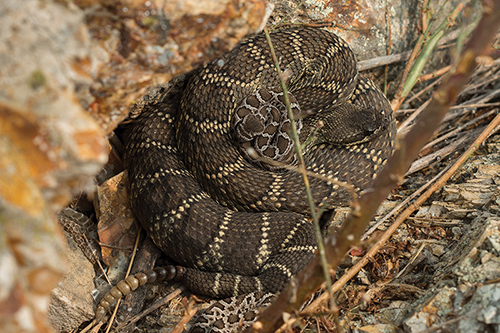 The latest reality show might rattle some people, but the creators hope that viewers walk away with a better understanding of the stars.

Cal Poly Biological Sciences Department researchers led by biology professor Emily Taylor have set up what they say is the first ever livestream of rattlesnakes in the wild at bit.ly/snakelivestream.

The cameras first went live in late August allowing viewers to watch expectant mother snakes at a large communal nest located at an undisclosed place in SLO County. As of Sept 7, two snakes gave birth to pups, and more are expected in the coming days.

“You can’t do that without having this kind of technology, because we would be disturbing them. If we were to walk up on them, they would start to act defensively,” said Taylor. “By having this camera we can actually do it from afar, they don’t even know we are there.”

Rattlesnakes are ovoviviparous, so they don’t lay eggs instead the female carries the eggs for about three months and then gives birth to live young —in our area six is the average number. Baby rattlesnakes are approximately 10 inches in length. They remain close to their mother for the first week or 10 days of their lives. During that time, much like humans, the mothers will often babysitting for each other.

“The pups shed their skin, the first time in about 10 days or so, and then everyone kind of disperses,” Taylor said. “We don’t really know what happens after that.”

The second reason for the study is to hopefully change the public image of rattlesnakes.

“People can see that rattlesnakes aren’t these bloodthirsty demons like they are shown on TV,” Taylor said. “In fact, they are really peaceful creatures that just want to take care of their babies and be left alone. The hope is that more people will, maybe not like rattlesnakes, but will be willing to respect them and call a service to remove them if they’re in their yard instead of chopping off their little heads.”

The first day the broadcast went live, 6000 people watched and chatted online while doing so. Taylor says the best time to watch is typically around 11 a.m. or noon.

“It’s kind of fun to watch on your lunch hour,” she said.

Viewers of the livestream are asked to help out by reporting observations on rattlesnake behavior at bit.ly/reportrattlecam. Keep in mind that sometimes snakes will not be visible because they are hiding in the crevices, and sometimes they will be coiled up or passing through, so check back throughout the day.

Taylor says the pups will remain at the rookery with their mothers through mid to late September. After that, the snakes will disperse through the countryside is search of food through late fall and then enter hibernation until spring. The camera will be turned off from the end of September through next spring.

The livestream is part of Project RattleCam, a community science project in which the public helps scientists study rattlesnakes. The project has collected time-lapse images taken in Colorado were they also have DNA samples of the snakes to study familial bonds. The local camera is the latest addition.

“We hope to eventually install cameras on snake aggregations all over the world,” Taylor said.

Next year could be the year of the rattlesnake for Taylor. National Geographic magazine is working on a story about human and rattlesnake interactions and Taylor’s work will be featured.

Taylor’s excitement about the project, and the snakes themselves, is as contagious as it can get when talking about a reptile a large percentage of the population fears. She refers to the snakes by name and even recognizes them individually by their scales.

“I love them,” she said. “I’ve been completely obsessed, they are so wonderful. I sit all day watching them and interacting with people on live chat on YouTube about it. I’ve been looking forward to this livestream camera like it was Christmas all year.”

If you come across a rattlesnake, Taylor says to give it 10-feet of space. If one is on your property, the Cal Poly professor offers a free removal service where the snakes are safely relocated. To find out more about what the snake service does or donate to help fund future rattlesnake livestreams — the camera for this project was $7,000 funded through Cal Poly’s Research Scholarly and Creative Activities program — go to centralcoastsnakeservices.com or call 805-401-0811.