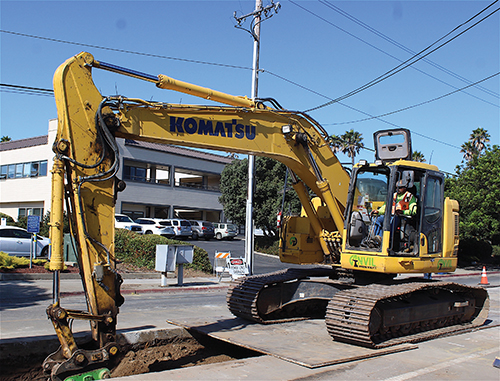 One of Anvil’s trenching crew compacts dirt in the Quintana Road pipeline trench with a Komatsu excavator.

For months work on the pipelines for Morro Bay’s Water Reclamation Facility has been diverting traffic off and around Quintana Road, as contractors lay the 3.5 miles of multiple pipes that make up the conveyance system out to the new treatment plant being built above South Bay Boulevard

And most recently, residents have watched as massive pieces of equipment shielded from view by a green fence, work on the trickiest part of the pipeline job — tunneling underneath the roundabout.

Paul Amico, the conveyance project manager with Carollo Engineering, gave an Estero Bay reporter a tour of the difficult work being done.

Amico said the pipeline project was designed to tunnel under because, “We didn’t want to tear up the roundabout,” which he described as having a “spaghetti” web of underground utilities.

They could have done traditional trenching for the pipelines, as is being done for most of the $31 million pipeline job’s run, but they also sought to minimalize disruptions to the traffic flow at one of the city’s main entrances and busiest intersections.

Amico said Water Works Engineers, the design firm on the pipeline job, studied seven or eight different routes through that area, which included running the pipes on the east side of Hwy 1 instead of up Quintana, as part of a routing study.

Amico said going “trenchless” is three to four times more expensive depending on the conditions of the soil they encounter. But the costs have to be weighed against the potential impacts, especially with so many utilities potentially in the way. “It’s a trade-off,” he explained.

The contractor for the pipelines, Anvil of San Francisco, brought in a sub-contractor — Vadnais Trenchless — that specializes in tunneling operations. Even so, this job is a little unusual.

For one, the job is running two forced sewer main pipes, a return wastewater pipe for discharge into the ocean and another water line — located in a separate trench — that will carry the recyclable water back to a new injection well field located on the northeast corner of the power plant property, adjacent to Morro Creek.

That’s where the recycled water will be injected into the ground to augment the groundwater basin along Morro Creek, which is a main source in the City’s drinking water supplies.

That injected water is intended to act as a block to potential seawater intrusion, should the City need to pump the wells at Lila Keiser Park, as well as adding to the supply.

Laying pipes is a complex construction in and of itself, Amico said. Add boring for some 340-linear feet, at 30 feet deep and it gets even trickier.

Vadnais brought in the biggest tunnel boring machine they have, and have been boring and fitting a 60-inch (5 feet diameter) steel dram or casing (steel pipe in 20-foot segments, connected with a fitting and then tack-welded), that will have all the pipes running through it, including a separate conduit holding a fiber optic cable.

That conduit will be backfilled with sand to fill any cavities.

The boring machine is a giant, hydraulic drill rig, with a cutting head similar to what one might use to drill a water or oil well but drilling horizontally through the soil instead of vertically down into it. It’s a whole lot bigger than a water well bit and the first thing they had to do was dig two massive holes on either side of the roundabout.

The drill rig sits at the bottom of a huge 35-foot deep hole, lined with steel sheeting walls and sitting in the front yard of what used to be a U-Haul store. It’s what lies screened behind the green fence.

The drilling system includes a big pump house that pumps in a drilling solution — Bentonite clay and water — to keep the soil being dug out fluid and easy to remove, but also keeping the hole from collapsing.

A mix of wet soil, water and the lubricant — called slurry — is piped back through the drill and into a hopper. There it is piped into the separator building and the drilling fluid is separated and reused.

The wet soils are dried to what feels a lot like ordinary beach sand though not as gritty, and trucked away and stored off site. It will be used to fill in the holes.

The drill rig has two, giant hydraulic rams that push the casing along with the drill bit, so the tunnel pipe is installed as they go. The rams push against a solid concrete wall that was built down inside the hole. It has 300,000 pounds of “jacking” force, Amico said of the hydraulic rams.

The tunneling job also required digging a “receiver” hole on the other side of the roundabout on Las Tunas Avenue next to the Morro Bay Coffee Co. That 30-foot deep hole is where things got even more complicated.

Amico said the City’s consultant, Geotech, had drilled test holes to see what’s under the ground and not surprisingly they encountered silty sands, clay, soil, and water. “We expected to hit water,” Amico said, “the Geotech report predicted it.”

That’s led to a side hole being dug in the sidewalk in front of the coffee company, where they have been steadily pumping out groundwater to keep the receiver hole dry.

That water is being pumped at 100 gallons a minute, into the City sewer line to mix with the flow and be treated at the current treatment plant on Atascadero Road.

The City doesn’t have any water wells in the area, so that groundwater isn’t being used.

Amico said they chose to put the water into the sewer because they’d need a permit from the Regional Water Quality Control Board to use the storm drains.

“You don’t need a permit to go into your own sewer system,” he said.

The pit on Las Tunas is less deep, meaning the roundabout run is going uphill. That’s because the high point in the whole 3.5-mile run out to the treatment plant is further up Quintana Road near La Loma Street. From there, it will gravity feed all the way to the new plant.

All this force will be generated by a new lift station being installed in another huge hole on Main Street next to Lemos Pet Supply Store.

The way it will work is that Pump Station-A (on Atascadero Road) will push the flow up to PS-B (at Lemos) and then be pushed all the way to the treatment plant. Also, a pipeline will be run from the existing Lift Station 2 (under the Front Street parking lot by the Maritime Museum), through the power plant and connect with the pipes that will run from Atascadero Road to PS-B.

That will bypass an existing main line that runs down the Embarcadero, under Morro Creek and on to the treatment plant on Atascadero Road. That pipeline drains the Downtown, the Heights and Embarcadero, nearly half the town. That portion of the pipeline job has not yet begun, Amico said.

Tunneling work has progressed pretty smoothly, Amico said, and so too has the pipeline job, despite a rocky start. On the first day of trenching on Quintana at La Loma, they hit a water main and with water gushing 20-feet high, the City had to come out to fix it.

As a City crew was finishing up that mishap, a bypass sewer line they’d put in at the Lift Station 3 (located near the Quintana/South Bay intersection) was bumped by a forklift and started leaking. The City fixed that too.

Work on trenching down Quintana Road is fast coming to an end, as Anvil’s trench crew there is about to start on its final leg, making a slanted approach to the tunneling site.

Once they finish that small part, Amico said, that crew will move to the end of Quintana and start working towards PS-B at Lemos. So while the disruptions on Quintana Road through the business district will end soon, they’ll shift to Main Street and from there to the bicycle path behind the power plant towards Atascadero Road. At some point they will have to close Main Street to trench through it.

They will also have to tunnel under Willow Camp Creek, a seasonal channel that starts on the hills east of town, runs under Hwy 1 and into a cement channel that parallels Quintana and Hwy 1. That creek channel dives under Main Street and resurfaces along the bike path. Though it isn’t much of a creek, it’s still considered a wetland and they want to avoid digging through it, Amico explained.

Amico said they should be done with the tunneling project in another week or so, provided no further issues are dug up.

Right now, Amico said, there are five crews working at several sites — the roundabout tunnel, two on Quintana Road, and one each at PS-B on Main, and at PS-A on Atascadero Road.

Amico, who has over 30 years of experience on big jobs like this, said he admires Morro Bay for what it’s trying to do with recycle its wastewater, calling it “forward looking.”

← Previous: Keeping up with the Rattlesnakes — Limited Time Spot Fire Erupt Along Hwy 1 →