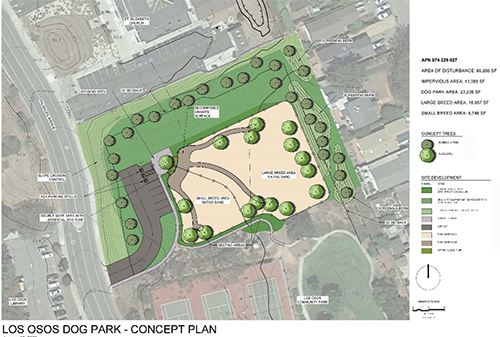 The Board of Supervisors, on Feb. 15, approved signing a so-called term sheet between the County and the Los Osos Community Services District for the construction and operation of a dog park.

An agreement was reached in 2019, but things were put on hold during the height of the pandemic and expired in Sept. of last year.

The initial term of the ground lease is for 10 years with a mutual option to extend by another 10 years. It states that County funds would not pay for the park, costs of which have not been determined as of yet. The Los Osos CSD is responsible for paying permit fees and entitlements to construct, maintain and operate the park.

Later that same night, at the Los Osos Parks and Recreation Advisory Committee meeting, discussions included water availability, management and maintenance, and a potential increase in the size of the areas dedicated to dogs.

The dog park would be an addition to the Los Osos Community Park located at 2180 Palisades Ave.

The cost of management and maintenance is one of the biggest issues.

“We can talk concept and get this to a point of even construction, but if we don’t have a means to manage and maintain it won’t move forward,” CSD General Manager Ron Munds said. The example everywhere else, especially in this county, is a nonprofit that would agree to take it on for maintenance or management and maintenance. We have yet to find that nonprofit. That’s going to be a grassroots effort. People really want this dog park, the CSD can be the lead but this is going to be a community project. This isn’t going to be miraculously funded by the county. They’ve made it very clear they’ll have no financial involvement, at least at this point in time.”

Before the concept plan can be finalized, a size has to be agreed upon. PRAC members Shaunna Sullivan and Alissa Feldman supported expanding the space.

“I don’t understand why we aren’t making it bigger as opposed to all the landscaping, berming and setbacks,” Sullivan said. “The goal of this is a dog park where a dog can actually run without such confining space. It just seems to me we’re doing a lot more than just the dog park, for the dogs. It seems to be more of a landscape, beautiful park setting kind of thing.”

Part of reason for the space dedicated to outer landscaping and the setback is to provide screening for the neighboring church and residential areas.

The most recent design includes 66,295 total space, with 23,236 square feet for rover to romp with a 16,857 square foot sand area for large breed dogs and a 5,748 sf area for small breed dogs, drinking water supplies, some parking, trees, seating areas, decomposed granite walkways and drought-tolerant vegetation. A bathroom and some of the parking spaces were removed from the previous plan.

Water supply is an issue with all new construction Los Osos and the dog park is no different. Irrigation and drinking water for the dogs are a priority.

“It is going to be rather complicated or it may not be gold since it’s in Golden State’s water service area,” said Munds.

“They may just say we’ve got to establish a point of connection to their system, get a water meter and pay a water bill because the county and Golden State haven’t negotiated out recycled water yet. We may be on the hook for using potable water for the landscape irrigation.”

Munds said that the County and Golden State are trying to convert the irrigation at the Community Park from a well onsite to recycled water.

“I know it’s going to be expensive,” he said.

At this point, the community garden and pickleball courts, proposed by members of the public, are not a part of the plan.

“We received public comment about a potential garden at our last Parks and Rec meeting,” said Matthew Fourcroy, PRAC chair. “We discussed that item pretty vigorously, and the committee has decided that we’re going to focus on just the dog park for now. That could be a second phase.”

• Approval of the Los Osos Habitation Conservation Plan (HCP) by the Coastal Commission and U.S. Fish and Wildlife is still pending and no projected approval date has been released at this time.

• Approval of the Los Osos Community Plan, which was submitted to the California Coastal Commission in December of 2020 and is expected to be approved sometime in early 2022.

• Develop a project cost estimation in order search for grant and other funding opportunities, which is expected to be complete before the next fiscal year starting July 1.

• Identify a partner (i.e. nonprofit, service blue) to oversee operation of the park.

Readers who want to be involved with this anticipated project, can go to the at https://www.losososcsd.org/los-osos-dog-park-concept-plan or email info@losososcsd.org