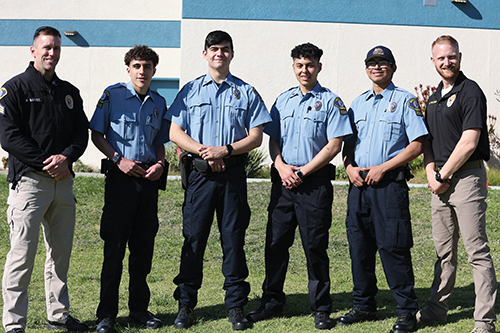 During competition, Police Explorers take part in various scenarios that mirror what law enforcement officers from around the country respond to daily. They are then judged by peace officers. The Arroyo Grande event included about 10 teams from lawn enforcement agencies in Visalia, Santa Maria, Santa Rosa, Stockton and Kings County.

Post 43 brought home first place in the crime scene investigation scenario where they were dispatched to a burglary but upon arrival the suspect was gone. The evidence, however, was there, and the team worked together to collect fingerprints, determine what happened, and make reports.

“We are proud of their hard work and what they have accomplished,” said Commander Amy Watkins with the Morro Bay Police Department. “Their skills were tested as they competed against explorer posts associated with much larger agencies including two California CHP posts. They worked hard and received compliments from many of the judges commending our explorers for their professionalism, desire, and willingness to learn from each experience. We are happy with the success and the trophies they won however, we are even more proud of the way they represented themselves and the Morro Bay Police Department.”

Exploring is a program devoted to career learning, development of life and leadership skills, and community service. The team meets every Thursday from 5 to 7 p.m. to learn and hone their skills.

In competition, explorers interact with witnesses, search suspects, fill out reports, log evidence and, hopefully, solve crimes. They have to be familiar with penal codes and police procedures.

“This is a team event that is mostly studying,” said MBPD Officer Daniel Palumbo, explorer advisor. “There is a lot of buildup before the actual event, and then they get one opportunity on the spot. During the actual competition, we have no part in it. If we speak to them at all, they disqualify the whole team.”

Now, post pandemic, the team hopes to compete in at least three events a year. In 2023, Post 43 plans to participate in EXCON Las Vegas, a one-day competition with over 500 young men and women from across the southwest United States testing their skills in basic police procedures.

Palumbo says the program provides structure and creates community, but it goes beyond that.

“Our explorers will handle the radio traffic for us while we are out on calls,” he said. “We trust them to use the radio and, in a sense, represent us out in the filed. There is a lot of trust placed on them and responsibility. They see a lot of stuff on the ride-alongs with us where they are representing our agency and are held to the exact same standards as officers.”

The Morro Bay Police Explorers are looking for students between the ages of 14 and 21 to join their post. Interested candidates should inquire regarding eligibility. For more information or to become a police explorer, send an email to Sergeant Will Marvos wmarvos@morrobayca.gov.