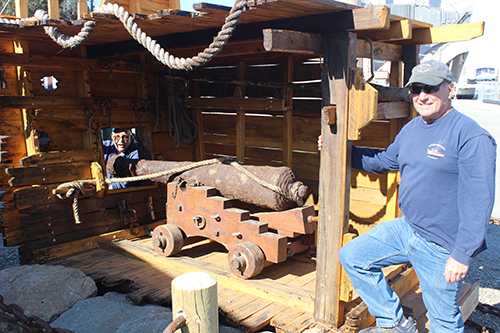 John Burgener, a.k.a. ‘Johnny Spindrift,’ poses with the ship’s battery, cannon compartment he built for the Morro Bay Maritime Museum to display a 16th Century ship’s cannon. It’s one of several new exhibits in the new ‘Kids Cove’ at the museum. Photo by Neil Farrell

Kids don’t have a lot to do on The Embarcadero, but thanks to the Maritime Museum, they’ve got a few new fun things to enjoy.

Scott Mather and a small army of volunteers are putting the finishing touches on exhibits that kids can play with and enjoy.

Those include a display where they can learn to tie various “sailor’s knots” and a demonstration of the scientific principal involved in a block and tackle system.

But perhaps the coolest thing is a new exhibit recreating the cannon battery one might have found on an old-time tall ship, harkening back to when pirates roamed the seven seas, epic naval battles, and the days when he who ruled the seas ruled the world.

Maritime Museum Association President, Scott Mather, said that with the Morro Bay Aquarium and the Skateboard Museums both closed, the association wanted to do something for the kids.

“We decided to do some kids-oriented exhibits,” Mather said. They wanted the new features of the museum, which is located on The Embarcadero at Front Street (look for the giant submarine), to be family friendly and bring the idea of maritime history to the younger visitors, so the “Kid’s Cove” was born.

“We wanted it to be educational, fun and competitive,” Mather said. “Parents like it because the kids are having fun in Morro Bay.”

He added that the City Council was a big help, as the City new budget had some $50,000 available for community grants that included $25,000 from the $1.1 million the City received from the Federal Government’s COVID relief monies (the City is expecting another $1.1 million next summer). The association applied for $5,000, he explained, and it was awarded.

The block and tackle exhibit has long been a part of the Maritime Museums’ offerings when its exhibits were set up during Harbor Festival dating far back into the 1990s.

The simple exhibit consists of several equal weights, rigged to lift with a rope and pulley. The different stations make it easier and easier to lift the dead weight illustrating the scientific principal of leverage with the block and tackle.

The knot tying station, Mather said, Jim Bennington, a local fellow, built the exhibit, which passes on the tradition of knot tying, which has played a large part in maritime history worldwide.

They’ve also added an exhibit featuring an early 1-cyclinder marine engine, dating back to the early days of the 20th Century and the beginnings of powerboats.

But it’s the cannon exhibit that really catches the eye. John Burgener, a retired contractor, is chiefly responsible for the cannon exhibit. He explained that one day he called Keith Kelsey, formerly of Sylvester’s Tug Service and now with the family’s Kelsey Vineyards winery, and laid it on thick, saying that since he was a little kid he always wanted to have a cannon.

“He said to come on over and we’ll drink some wine and talk about,” said Johnny Spindrift, who got his nickname for the massive amount of work he did restoring the Monterey-style fishing boat, Spindrift, now on display at the museum. The Spindrift is one of several boats that Burgener has restored.

He was able to talk Kelsey, who is a member of the museum association board, out of one of the ancient cannons on display at the See Canyon winery.

The cannon was salvaged off the coast of Florida some time ago and Burgener said it is of British design and probably from the 16th Century (1700s).

“It’s been underwater for 500 years,” Burgener said. “Just think the last person that lit that fuse went down with the ship.”

Given that it is so old, and it’s true origins unknown, it’s entirely possible the cannon is actually from a pirate ship in the Caribbean. It was on display for years in a restaurant in Florida.

But how should it be displayed? Burgener said the idea for the display, “Came to me at 3 in the morning.” He decided to recreate a cannon compartment, as it would have looked when the cannon was operable. He needed the right wood to build it.

He visited with Glenda Boatman, whose late husband Don Boatman had milled some special wooden planks. Burgener laughed, “She gave it away and I absconded with it.”

Mrs. Boatman was touched when he told her what he wanted to do with the wood. “She got teary-eyed,” he said, “knowing that his [Deon’s] work would be put to something good.”

The result, which he admits is still a work-in-progress, is modeled after the cannon battery of an old sailing ship, with the gun port opening and mounted on a carriage with wheels.

Loaded with lead balls and powered by gunpowder, the cannon would recoil back but kept by a breech rope from flying back across the ship’s deck. The cannon barrel would then be doused with a wet cloth (to kill any remaining embers inside), packed with powder, wadding, cannon ball (or chains), and then more wadding to make sure the ball doesn’t roll out of the cannon.

It would then be pulled back into place for firing through the gun port on the sides of a vessel — then repeat.

Burgener’s display also recreates the outside of the ship, up to a decorative railing, complete with holes in the flanks where the ship took fire.

Burgener said it took him a month or so to build the scene and the Association still has a few touches, such as a stack of cannon balls, to add to it. “It was a lot of work,” Burgener said. “But it was a lot of fun.”

Mather said work is also underway on two other major projects for the museum. They hope to get the City to allow them to move a small “fishing shack” that’s on private property down by the launch ramp, to a spot at the museum. The owners have agreed to donate it and he said they hope the City will expand their footprint to include that unused area.

They will need a house mover to bring it down the Embarcadero, which thankfully, has no overhead utility lines to deal with.

Another project would install a Quonset hut that someone in town wants to donate, for a movie theater and exhibit building, greatly expanding the museum’s footprint. The issue there however, is that the Harbor Department has several RV camping spaces where they want to put the hut.

And while a group of citizens is trying to put a measure on the ballot that would prohibit camping anywhere on The Embarcadero and at Morro Rock, there’s some confusion as to whether the site, in the so-called Triangle Lot, would fall under that potential ban.

Mather points out that the Maritime Museum’s mailing address is listed on The Embarcadero (1210 Embarcadero), even though the actual location is really on Front Street.

Both of those projects will take a significant amount of support and if readers want to find out more about the Morro Bay Maritime Museum, see: morrobaymaritime.org.