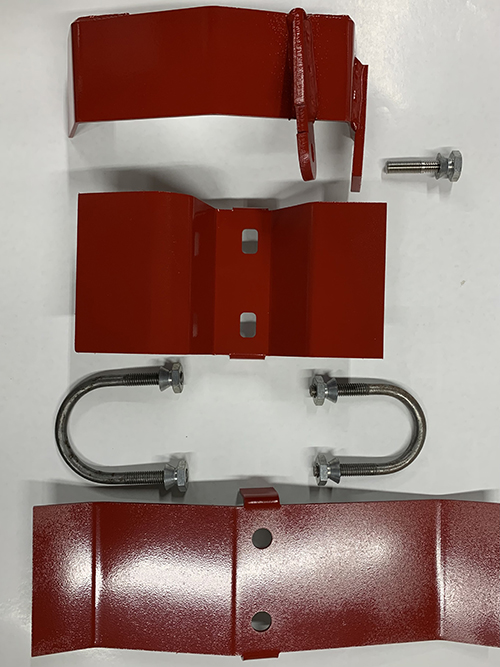 Morro Bay’s Bill Todd of Todd’s Garage, has invented the ‘CAT ARMOR,’ a device designed to thwart the theft of catalytic converters off Priuses but able to be modified for other vehicles. Submitted photo

Did some scoundrel steal the catalytic converter off your Prius or are you worried someone might?

For the past several years, sneaky thieves have roamed the night, looking mainly for Prius and other hybrid models, shimmying underneath the vehicle with a reciprocating saw to remove the smog reduction devices, and then hocking them for the precious metals found inside.

It’s a crime that normally comes in waves, with thieves stealing dozens at a time and mostly getting away with it. But not always.

Recently, Morro Bay Police with some assistance from Atascadero P.D. caught one of these alleged thieves, a man from Oakland, pretty much red-handed, with some 15 catalytic converters piled into his trunk. Two accomplices managed to avoid arrest and are being sought. And just last week three catalytic converters were stolen in Morro Bay in a single night (see the Police Logs).

Bill Todd of Todd’s Garage, an automotive repair and smog check station shop at 972 Quintana Rd., in Morro Bay, has invented a gizmo to thwart these thieves.

“We have a new device to deter catalytic converter thefts on mainly Prius vehicles,” Todd said, adding that they are able to modify the devices for use on other makes and models as well. Todd’s Garage first started installing the devices, named, “CAT ARMOR,” last March, he said, building them one-at-a-time.

The CAT ARMOR “protects the bolts from being removed and has a plate that deters the thieves from cutting off the rear of the catalytic converters,” he said. “The part has a ‘provisional patent’ and my CAT ARMOR trademark is pending.”

They’ve since found a local company to manufacture the devices, so they now carry them in stock.

He’s produced a how-to video for YouTube (see: www.youtube.com/watch?v=oQrlpL2q_BQ) that walks you through the installation process, which Todd said a person could do themselves with just one wrench.

The video, “shows how easy it is to install for someone that would like to save money and install it themselves,” he said. “Or we can install them for $262.50.”

The CAT ARMOR isn’t a brand new idea. Other such anti-theft products have been on the market for some time. But if the growing number of thefts — a nationwide problem but most frequently committed in California — is any indication, having more products available can only help with what’s a swiftly growing crime.

The most targeted models for theft are Toyota Prius, Honda Element, Honda Accord, Ford Econoline, Honda CRV, Ford F-250, Toyota Tundra, Toyota Sequoia, Ford Excursion, Lexus SUVs, and the Toyota Tacoma. And with the growing popularity of these eco-friendly hybrid vehicles, the temptation for thievery will only increase.

It takes a thief with the right tools just a few minutes to cut off and steal a catalytic converter and when done in the dark of night, it’s a relatively easy crime to get away with.

And the crime can be lucrative, too. Illicit metal recyclers typically pay between $50-$250 for one and the precious metals — Platinum, Rhodium and Palladium — used in hybrid vehicles’ converters can bring a thief up to $1,500 each.

But is protecting the catalytic converter on your vehicle worth the investment for something like Todd’s CAT ARMOR device? It would seem to depend on whether or not your insurance policy is going to replace the one that was stolen.

Comprehensive policies should cover the loss but — given the typical deductibles involved plus other potential damage done by the thieves — you won’t get off pain-free.

A typical replacement converter for a “second-generation “ Prius (older models) can cost $2,500 and a third-generation Prius converter (newest models) can go for $5,000. And while it might seem they must be made of gold to cost so much, there is perhaps thankfully no gold used in a catalytic converter.

Hybrid vehicles — with both a gasoline engine and electric motor — require catalytic converters with a higher concentration of precious metals than those found on gasoline-only cars. A 2007 Prius converter costs about $1,022 today, compared to $143 for the converter used on a Ford F-150 from the same model year.

The most expensive catalytic converters come on the Ferrari F430, with a price tag of $3,770.

In posts on the Internet, tips are given to battle these thieves. They are:

• Etch your license plate number onto your catalytic converter. This makes the part identifiable to law enforcement in case it gets recovered, as with the recent Morro Bay P.D. case;

• Park in well-lit areas (or better yet, in the locked garage); and,

If readers would like to speak with Bill Todd about his CAT ARMOR device, call the garage at: 805-772-1985 or book an appointment online at: toddsgaragewebsite.com. There’s also a link to the YouTube video on the website’s home page.