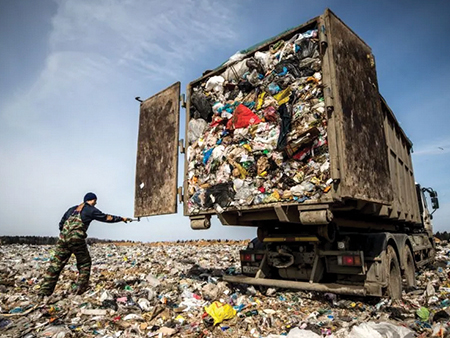 It’s the trash heap that just keeps on giving.

County Supervisors will dump another $414,000 buying equipment in the continuing monitoring of the long closed Los Osos Landfill.

Devlin also asked Supervisors to transfer some $572,000 from its Professional Services budget for “Waste Management” to the capital outlay budget to allow the equipment purchase. HDR’s contract is for some $200,000 a year.

The Los Osos Landfill, which is off Turri Road, operated from 1958-78 receiving some 500,000 tons of garbage, according to Devlin’s report. When it closed, the County took responsibility for maintaining the old dump “to meet all federal state, and local requirements once disposal operations ceased,” reads her report.

Years after it closed, in the 1990s, testing discovered the dump was leaking so-called “volatile organic compounds” (VOCs) mostly methane gas emitted through the natural process of decomposition of organic matter.

The Regional Water Quality Control Board in 1995, ordered the County to clean up the groundwater down gradient of the landfill, which sits high atop a mesa overlooking Los Osos Valley.

The County has done a number of things to try and comply with the water board’s edict, including “a cap enhancement project to minimize rainwater infiltration and construction of a landfill gas control system to remove VOC-containing landfill gas,” Devlin said. “These existing corrective action measures are effective at stabilizing and controlling VOC migration.”

The county started monitoring the groundwater in 1991 and VOCs detected in monitoring wells have not shown it moving downhill towards Los Osos Creek and eventually the National Estuary.

In 2005, the water board wanted an updated plan of correction for the landfill and the County hired a consultant to conduct that study. The study concluded that “bioremediation” or simply letting nature solve the issue, was the best thing to do. The RWQCB disagreed and wanted more aggressive actions. From that, the County decided that pumping the groundwater and treating it was the best thing to do.

“The County designed a groundwater extraction and treatment system (GETS),” Devlin said, “which includes 10 extraction wells and a granulated activated carbon treatment system to remove VOCs from groundwater. Pursuant to the design, treated water would be discharged to Warden Creek through an onsite storm water detention basin under a National Pollutant Discharge Elimination System (NPDES) General Permit for Highly Treated Groundwater. The County reviewed other options for disposal, however, none were determined to be feasible.”

In December 2020 the County finished installing the GETS gear and “No VOCs were detected in effluent samples from startup testing,” Devlin said, “demonstrating that the GETS is removing the VOCs as intended.”

But before they could break out the champagne, something else popped up.

“However,” Devlin said, “trace amounts of heavy metals were detected.”

She said that while the metals were below the limits for drinking water, they did not meet the NPDES limits.

The metals are “slightly above the stringent detection limits of the NPDES General Permit for Highly Treated Groundwater,” Devlin said. “As a result, the GETS is not currently permitted to operate. The delay has led to the RWQCB’s issuance of a ‘Notice of Violation’ that could subject the County to potential civil liability of $1,000, or more, per day until the GETS becomes operational.”

The County looked at various methods to remove the heavy metals, and decided the ion exchangers was best, and Water Techtonics, Inc., specializes in water treatment technologies, according to Devlin. The company tested its equipment on samples form the County’s treatment plant and they successfully removed the heavy metals.

With familiar threats of heavy fines from the RWQCB hanging over their heads, the County was ready to fast-track installation of the ion exchangers and hoped to be up and running by November.

The project at the closed landfill is among the first duties of the newly founded Solid Waste Division under County Engineering. It was formed last year after the County Supervisors voted to remove the County from the Integrated Waste Management Authority (IWMA).

Once all the new ion exchanger equipment is installed, up and running, the full transfer of solid waste duties will be made from the Utilities Division to the new Solid Waste Division, Devlin said, but this unit won’t be staffed by bureaucrats.

“The Solid Waste Division is proposed to be supported by a professional landfill engineering consultant, rather than adding permanent staff to the Division,” she said.

HDR’s contract for the old landfill was for three years initially, with options for two more years, at a cost “not to exceed” $200,000 a year. Rather than a steady contract, HDR is on call and task-oriented, meaning if things are going smoothly, they are not on the clock, however, whenever issues arise — either mechanical, operational or regulatory — they go to work.