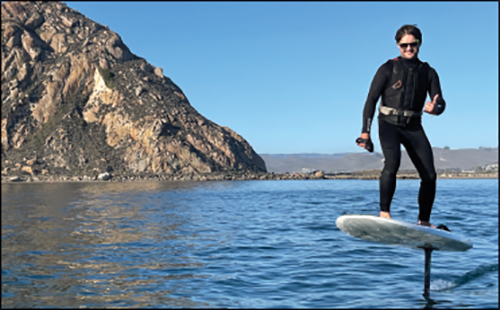 It’s one of the newest and hottest toys for thrill-seeking, adventurous types, and a new business in Morro Bay is introducing the Central Coast to this latest craze.

Central Coast Lift, is a new business started by Nick Trujillo and Gary Rhodes and located at the Morro Bay Landing, a relatively new development on the waterfront between Harbor Hut and Dockside.

A “Lift” is the manufacturer’s name for an “electric hydrofoil,” explained Rhodes, who is a certified boat captain driving charter boats like Capt. Stew’s bay cruise and Paradise Sportfishing, they’re also known as “eFoils.”
It’s a mix of hydro-aerodynamics, Rhodes said, and consisting of a board, a mast (protruding underwater), electric motor/battery, wing and a tail. The throttle, which controls the speed of the small propeller, is handheld and wireless.
The Lift is designed to motor through the water, reaching a speed where it lifts up and glides above the surface, like a speedboat when you throttle up.

“The ‘Airchair’ was the first style of this,” explained Trujillo, who also owns the Bay Cruisers electric boat rental based in The Boatyard Center, and opened but recently sold to his mom, LaNetta Trujillo, the Boatyard Market. That early version, he added, was pulled behind a boat and appeared back in the 1990s. This modern version is well beyond that.
“Lift has the patent,” Trujillo said. “They were the first to add a motor to it.”

According to the Lift website (see: liftfoils.com), “The Lift electric hydrofoil, or eFoil, lets riders experience flight over almost any body of water at up to 25 mph, no waves required. The eFoil takes advantage of modern technology and expert craftsmanship to create a state-of-the-art watersports technology experience combining the best of surfing, hydro foiling, and electric propulsion in an easy-to-use, unbelievably fun package.”

The Lift website runs down the company’s history, which started in 2010 in Puerto Rico. “In 2013, our co-founder Nick Leason — an engineer and avid surfer — came up with the idea for the original eFoil, applying the technology from smart phones, electric vehicles and even drones into a board that would let its rider fly above any body of water without needing to be propelled by wind or waves.”

Rhodes and Trujillo have the rights to sell Lift, with a territory that spans from Ventura to Monterey. The Lift is very new, Trujillo said, with the company’s first shipments going out in May 2018. It’s an expensive toy, too.

The Lift uses a Tesla battery, he added, that charges, “as fast as you can use it. They’re very new and very exciting.” The battery is housed in a watertight compartment inside the carbon-fiber board.

The two said they were interested in doing a story with Estero Bay News to try and clear up some misconceptions that have been going around in the community, after a fellow who has one, was seen motoring around the bay, which prompted some calls to the Harbor Office from concerned citizens. The speed limit inside the Harbor is 5 mph.
Rhodes said as a boat captain he is, “well versed in the Harbor’s rules and regulations,” and they are incorporating these into their demo routine.

Trujillo stressed that their business is not “renting” Lifts. It’s a dealership and they will only take someone out for a demo/riding lesson if they are serious about buying one — sort of like a test drive of a new Mercedes.

And they charge $300 for about 90 minutes for one rider, and more for extra riders, a price likely to discourage someone just out looking for a thrill ride.

The business also rents scooters; they have a couple of Trujillo’s electric boats that he moved from the Bay Cruisers’ location; and they even have a street-legal golf cart for rent.

Right now, Trujillo said, they are hoping to convince the City to designate a spot inside the harbor for their demos but if they can’t, he feels confident they can keep to the speed limit. “You can ‘foil’ at 5 mph,” Trujillo said.
They have a small pontoon boat with a sled and use it to ferry through the harbor to where they can ride. Rhodes added that they do not foil from the dock behind the store. And of course, they can go outside the harbor, too and ride, which is where they can really put the board through its motions.

Rhodes said the board will do 20 knots and a battery charge lasts about 2 hours.
Estero Bay News asked Harbor Director Eric Endersby about this new toy coming to town. He said their focus, “is keeping the speed of these eFoils down to 5 mph or less anywhere inside the harbor, which means any operations over that have to occur outside the harbor.

“The biggest issue with eFoils, to really use them for what they were made for, means you are exceeding the 5 mph speed limit that is throughout the bay.

“From what we have observed, to get on a plane they are right on the ragged edge of 5 mph, and while most of the operations we have witnessed are keeping to that speed, a few haven’t, and what we are mostly concerned about is people who won’t be able to resist stepping on the gas and really zipping around as they were designed to do.
“Which, as you can imagine, the switchboard has already been lit up several times from calls to complain about their speed and proximity to otters, seals and other wildlife.”

Trujillo said they are hoping a spot inside the Harbor Mouth and closer to the South Jetty — sort of a no-man’s area not used much by the public — might be designated as a riding spot, but probably not.
“Our position,” Endersby said, “is eFoils have to stay at or below 5 mph anywhere in the harbor, even in the ‘no-man’s land’ you mentioned. And that they are equipped just like any motorized vessel, because they are one, in that:
• They are state-registered and marked with CF numbers;
• The operator has a PFD [lifejacket] available (and wearing it if under 13-years old);
• They carry the required Coast Guard flares aboard.”

So far, the few eFoil riders that have been in the bay, including professional surfer and skateboarder, Stacy Peralta who Endersby said now lives in Cayucos, have behaved themselves.

“So far,” Endersby said, “both Nick and his peeps and Peralta have been towing the 5 mph line pretty well, but as I said, I think it’s only a matter of time before we start having problems. We are just going to stick to the 5 mph and equipment/registration rules just like any other powerboat, and if they can’t live with that, well, then that’s a problem. EFoils really do belong outside the harbor to operate as they were designed, period.”

Trujillo and Rhodes are fine with that, and reiterated that they are only doing retail sales with demonstration lessons. And at $12,000 each, renting them isn’t really an option, anyway. “They never go out by themselves,” Trujillo said of prospective buyers. “They have an instructor with them.”

They are putting together a training/certification program for Lift owners and Rhodes said that towing them out with the pontoon boat gives family members a chance to go out and watch a demo from the relative safety of the boat.
Where are they made? Trujillo said the Tesla batteries come from the San Francisco Bay Area and the boards are manufactured in Puerto Rico, so they’re an American-made product.

The eFoil sales, and electric bike-scooter rentals are just some of the offerings the new store will have, as they describe the business as still evolving. Rhodes is an artist in the Lichtenberg method of carving on wood, also called “fractional burning.”
“We’re cranking out art too,” Rhodes said.

All told, the new business is selling eFoils, renting the scooters and electric bikes, as well as whale watching and private yacht charters with Toast the Coast, fishing and more. Call 805-395-1440. Central Coast Lift is at 1215 Embarcadero in the Morro Bay Landing building. See their website at: www.centralcoastlift.com.