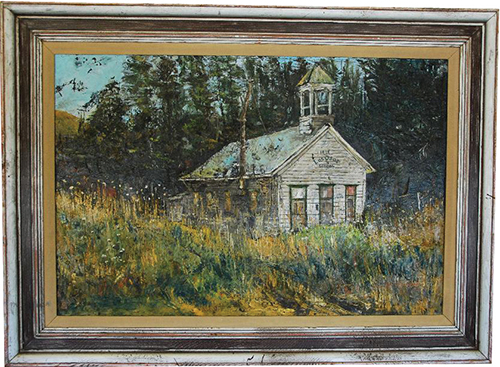 A close-up of the painting on display at the Los Osos Library.

Does anyone know something about Roland Sanders Herold? Several folks would love to solve a mystery about a painting of the Los Osos Schoolhouse that is thought to have been done by him.

The next time you visit the Los Osos Library, focus your attention straight ahead at the painting before you. The signature on the artwork belongs to Mr. Herold, but that is all we seem to know about him or the creation of the painting except it traveled out of California to languish on the floor of a small antique shop in Rocky Forde, Colorado. It had been sold by a broker passing through who said he had picked it up at an estate sale somewhere.

A past graduate of Cal Poly, Bonnie Rosser, recognized the subject of the painting and decided it belonged back in Los Osos. Now a resident rancher with her husband in Wheatland, CA, she was visiting her daughter and intended to return it when her family of three generations of Cal Poly graduates returned to San Luis Obispo for their annual visit and participation in April’s Poly Royal & Rodeo. She wasn’t sure who should have it so she called and delivered it to the Los Osos Chamber of Commerce. Knowing the Chamber operations would soon be transitioning to an online support program and the office would be closing by the end of June, President Jim Stanfill arranged with Bonnie Richan, Los Osos Library branch manager, to have it exhibited prominently at the library for all to see.

Based on historical photos sent to Estero Bay News by Paula McCambridge, PIO at the Public Works Department of the County of San Luis Obipso, the painting is a match for the Los Osos Schoolhouse.

EBN columnist Joan Sullivan had reported, “John Peterson, a rancher, had donated land for a schoolhouse in 1875 so his daughter, Annie, could attend once she was five. It was a private school until 1891 when it became the Sunny Side School District. The two-acre parcel on the south side of Los Osos Valley Road included a house for the teacher. The Boardman family, Mary and George and their three adult children, purchased it in 1869. The Boardmans collected bits and pieces of the school’s history over the years, when former students from around the state would occasionally drop by—some returning several times. They told of their early education in a one-room school. Mary discovered that many families in the Los Osos Valley area attended the school. George Souza stopped by one day in 1976 and told Mary that his father, a sheepherder, came to the states in 1873 from the Azores and had paid taxes in the Sand Hill School District. George attended Sand Hill School from 1901-1905.”

Meanwhile Gary Dove had retired from the professional lighting company he had created, Dove Systems based in SLO, and was volunteering Fridays for the Chamber. He grew curious about the painting’s artist. Growing up Dove used to visit his grandmother in Los Osos before he relocated permanently after attending Cal Poly and marrying. He discovered who could have been the match to the signature. Roland Sanders Herold was born in 1927 in Panama, was a U.S. Navy veteran and died in 2002. His funeral was in Santa Barbara. His wife, Betty Dorsey Herold, is also deceased.

If you can verify more about this schoolhouse painting or have a memory about someone who attended the school or ever met or know something about Mr. Herold, contact Bonnie Richan or her staff at the library to share what you know at www.slolibrary.org or (805) 528-1862 or 2075 Palisades AV.

A big thank you goes to Bonnie Rosser for recognizing and returning the artifact and to Bonnie Richan for providing a public area to display this historic memory for Los Osos.

Today’s column might seem a simple lost and found story, but it documents a moment of time in Los Osos’ history. Photos and paintings we have in a box or album or the paintings we display in our homes tell our life cycle stories — the journey and times we have lived through. Documentation will be prized by our children and grandchildren and, if not them, the historians of their times. Let’s try and make it easier for them to discover the who, what, where, when and why of an artifact when they look for answers to questions about our times.