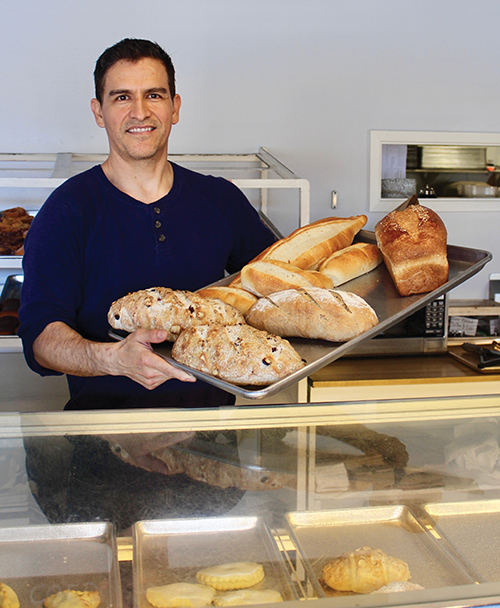 Dante with a sampling of some of the fresh baked bread Carlock’s now offers.

Story and Photos by Theresa-Marie Wilson

After more than six decades in business Carlock’s Bakery will celebrate its first anniversary under current owners, husband and wife team, Dante Garcia and Patricia Mora. Their two sons, Lolo and Andy, and seven employees help keep the show running.

It has been a busy year for the couple that purchased the local icon on Sept. 16, 2021.

Like many other business owners, the coronavirus pandemic impacted their customer base, employee retention and supply chain, but they came through it with a new look and new menu to go with favorite selections from the past.

Dante, also a real estate agent with RE/MAX Pines by the Sea in Cambria, is a graduate of the Culinary Institute of America in Napa Valley where he specialized in artisan bread making. He baked professionally for close to 28 years for the French Corner Bakery in Cambria before Carlock’s became available to purchase.

“It was a goal that I always had, but I never had either the money or the opportunity right there to be taken,” Dante said. “This time, we happened to have both, so we jumped in.”

He now spends six days a week at Carlock’s where he has remained true to many of the traditional fan favorites including handmade donuts, cakes, cookies, and steam buns, but he has added several artisan breads to the line including the best selling sourdoughs, along with ciabatta, 9-grain whole wheat, cranberry pecan, baguettes, and concha.

Dante, how emigrated from Mexico, says the bolillo, a shorter version of a baguette, is a must try.

“They are a French roll, but they are very popular in Mexico,” he said. “A lot of people don’t know what they are, but they make really good sandwiches. I would definitely recommend them.”

Scones, tapioca and tres leches cakes were also added to the regular menu items, and several sandwiches and additional Mexican items are planned for the future.

What goes better with baked goods than a good cup of coffee? When Dante took over the bakery, he switched from Farmer Brothers brand to locally owned SLO Roasted Coffee. As of a couple weeks ago, a high-end espresso machine takes up prominent counter space and customers can now enjoy mochas, cappuccinos, lattes, Americanos, and espresso shots. Popularized in the late 1980s and early 1990s, latte art could soon be an added flourish to the steamed milk on hot drinks.

“When I was at the bakery in Cambria, we always practiced latte art, and I was able to do a few figures and stuff like that,” Dante said. “It is very hard to do. I’m teaching everybody to do it, but it takes months.”

If you aren’t a coffee fan, Carlock’s also offers boba tea, Frappuccino, iced and hot tea, and a variety of hot chocolates.

The bakery a new, very modern and inviting look as well. It has been painted and new floors and light fixtures were installed. Plans are in the works to replace the old tables and chairs and offer more outdoor seating.

“When I came, I noticed that many things needed an upgrade to the quality that people deserve,” Dante said. “When I saw some people eating a pastry outside on those ugly benches or people sitting, eating, drinking our coffee right next to a bunch of chairs piled up; it just wasn’t me. It made me think people deserve something better. I want to provide more enjoyment.”

In Carlock’s world of goodies, Danish pastries top the sweet list as best sellers and the croissants filled with ham or turkey lead the savory side. As for the doughnuts, the chocolate or maple bars reign supreme.

Over the past year, Dante said he is wormed by the support the business has received.

“I was surprised to see how many welcoming and friendly people are around here. There is a smile on their faces and they say, ‘thank you for being here and providing these products.’”

Plans are underway to celebrate the bakery’s one-year anniversary on Sept. 16 with longtime loyal customers and new ones who are drawn to the comforting smells and tastes of baked goods paired with hot coffee. For Dante, the day is even more significant because it is his home county’s Independence Day.

Clyde and Margree Carlock, originally opened the Los Osos shop in 1961, and Dante says their name will remain a part of the new look.

“It’s very popular and the whole purpose of a business is income, of course,” Dante said. “The name makes it easier for people to find. It [also] brings me joy to see people like me, 40 or 50 years old, that come in and say, ‘my mom used to bring me here when I was a child. I had this kind of doughnut or this kind of pastry — same location and everything.’ That’s always nice to hear.”